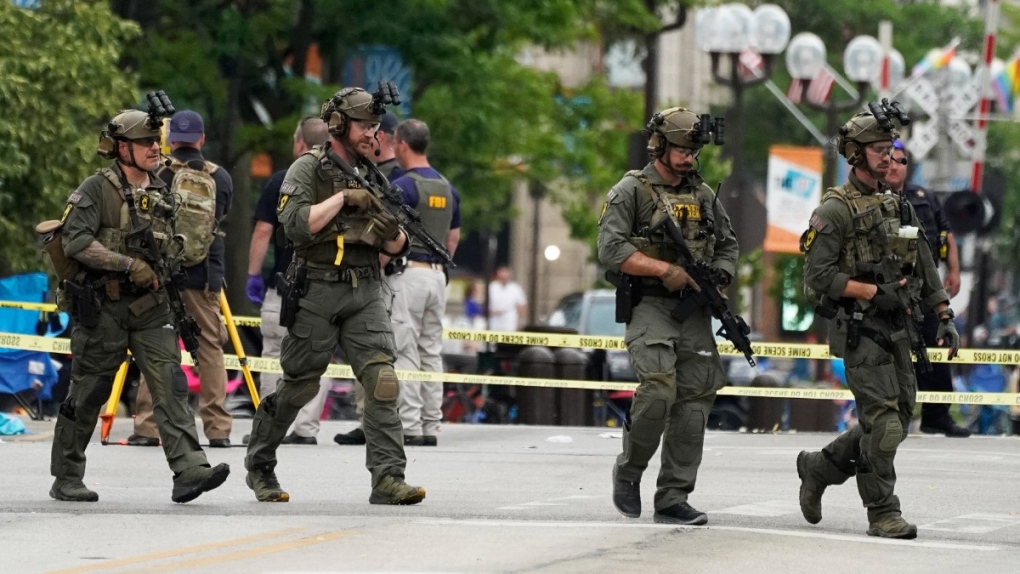 Highland Park’s police chief said the 22-year-old man identified as a person of interest in the shooting that killed at least six people, wounded at least 30 and sent hundreds of people fleeing from an Independence Day parade in suburban Chicago on Monday has been taken into custody.

Police earlier said Robert E. Crimo III should be considered armed and dangerous and was pulled over by police on Monday evening after a brief pursuit.

THIS IS A BREAKING NEWS UPDATE

A gunman on a rooftop opened fire on an Independence Day parade in suburban Chicago on Monday, killing at least six people, wounding at least 30 and sending hundreds of marchers, parents with strollers and children on bicycles fleeing in terror, police said. The suspect remained on the loose hours later as authorities scoured the area and police surrounded a home listed as his possible address.

Highland Park Police Chief Lou Jogmen said Monday afternoon that police have identified 22-year-old Robert E. Crimo III as a person of interest and cautioned he should be considered armed and dangerous. Police declined to answer questions about how they identified Crimo. Authorities described his car as a silver Honda Fit with an Illinois licence plate DM 80653.

The July 4 shooting was just the latest to shatter the rituals of American life. Schools, churches, grocery stores and now community parades have all become killing grounds in recent months. This time, the bloodshed came as the nation tried to find cause to celebrate its founding and the bonds that still hold it together.

“It is devastating that a celebration of America was ripped apart by our uniquely American plague,” Illinois Gov. J.B. Pritzker said at a news conference.

“I’m furious because it does not have to be this way… while we celebrate the Fourth of July just once a year, mass shootings have become a weekly — yes, weekly — American tradition.”

The shooting occurred at a spot on the parade route where many residents had staked out prime viewing points early in the day for the annual celebration. Dozens of fired bullets sent hundreds of parade-goers — some visibly bloodied — fleeing. They left a trail of abandoned items that showed everyday life suddenly, violently disrupted: A half-eaten bag of potato chips; a box of chocolate cookies spilled onto the grass; a child’s Chicago Cubs cap.

“There’s no safe place,” said Highland Park resident Barbara Harte, 73, who had stayed away from the parade fearing a mass shooting, but later ventured from her home.

Lake County Major Crime Task Force spokesman Christopher Covelli said at a news conference “several of the deceased victims” died at the scene and one was taken to a hospital and died there. Police have not released details about the victims or wounded.

Lake County Coroner Jennifer Banek said the five people killed at the parade were adults, but didn’t have information on the sixth victim who was taken to a hospital and died there. One of those killed was a Mexican national, Roberto Velasco, Mexico’s director for North American affairs, said on Twitter Monday. He said two other Mexicans were wounded.

NorthShore University Health Center received 26 patients after the attack. All but one had gunshot wounds, said Dr. Brigham Temple, medical director of emergency preparedness. Their ages ranged from 8 to 85, and Temple estimated that four or five patients were children.

Temple said 19 of them were treated and discharged. Others were transferred to other hospitals, while two patients, in stable condition, remained at the Highland Park hospital. 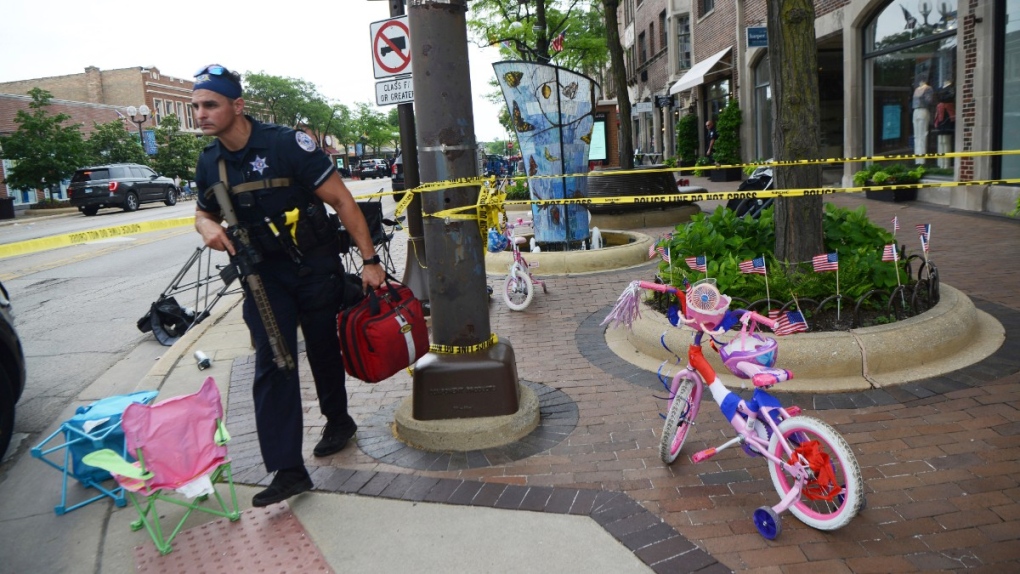 A police officer walks past a child’s bicycle that was left along the parade route a block away from the scene of a shooting involving multiple victims that took place at the Highland Park, Ill., Fourth of July parade, July 4, 2022. (Joe Lewnard//Daily Herald via AP)

The shooter opened fire around 10:15 a.m., when the parade was about three-quarters through, authorities said.

Highland Park Police Commander Chris O’Neill, the incident commander on scene, said the gunman apparently used a “high-powered rifle” to fire from a spot atop a commercial building where he was “very difficult to see.” He said the rifle was recovered at the scene. Police also found a ladder attached to the building.

U.S. President Joe Biden on Monday said he and first lady Jill Biden were “shocked by the senseless gun violence that has yet again brought grief to an American community on this Independence Day.” He said he had “surged Federal law enforcement to assist in the urgent search for the shooter, who remains at large at this time.”

Biden signed the widest-ranging gun violence bill passed by Congress in decades, a compromise that showed at once both progress on a long-intractable issue and the deep-seated partisan divide that persists.

Police believe there was only one shooter but warned that he should still be considered armed and dangerous. Several nearby cities cancelled events including parades and fireworks, some of them noting that the Highland Park shooter was still at large. Evanston, Deerfield, Skokie, Waukegan and Glencoe cancelled events. The Chicago White Sox also announced on Twitter that a planned post-game fireworks show is cancelled due to the shooting.

More than 100 law enforcement officers were called to the parade scene or dispatched to find the suspected shooter. 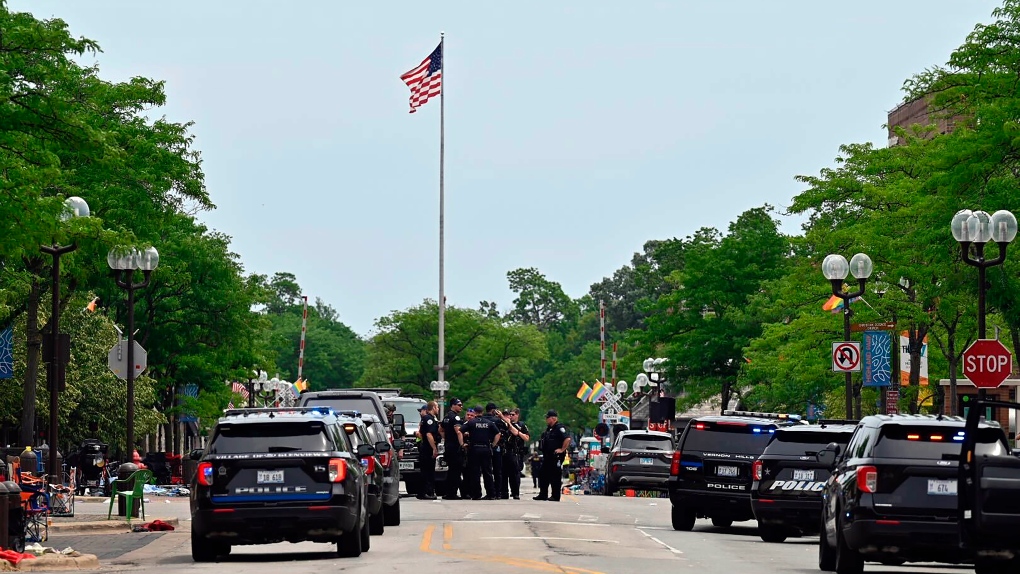 Police from several local municipalities including the Illinois State Police search downtown Highland Park after the mass shooting at the Fourth of July parade, July 4, 2022 in Chicago. (Tyler Pasciak LaRiviere/Chicago Sun-Times via AP)

More than a dozen police officers on Monday evening surrounded a home listed as an address for Crimo in Highland Park. Some officers held rifles as they fixed their eyes on the home. A large armoured truck, marked “Police Rescue Vehicle,” occupied the middle of the road near the residence. Police blockaded roads leading to the home in a tree-lined neighbourhood near a golf course, allowing only select law enforcement cars through a tight outer perimeter.

Highland Park is a close-knit community of about 30,000 people located on the shores of Lake Michigan just north of Chicago, with mansions and sprawling lakeside estates that have long drawn the rich and sometimes famous, including NBA legend Michael Jordan, who lived in the city for years when he played for the Chicago Bulls. John Hughes filmed parts of several movies in the city, including “Ferris Bueller’s Day Off,” “Sixteen Candles” and “Weird Science.”

Pritzker, a Democrat, promised support for the community as well as to bring gunman to justice.

“There are no words for the kind of evil that shows up at a public celebration of freedom, hides on a roof and shoots innocent people with an assault rifle,” Pritzker said. 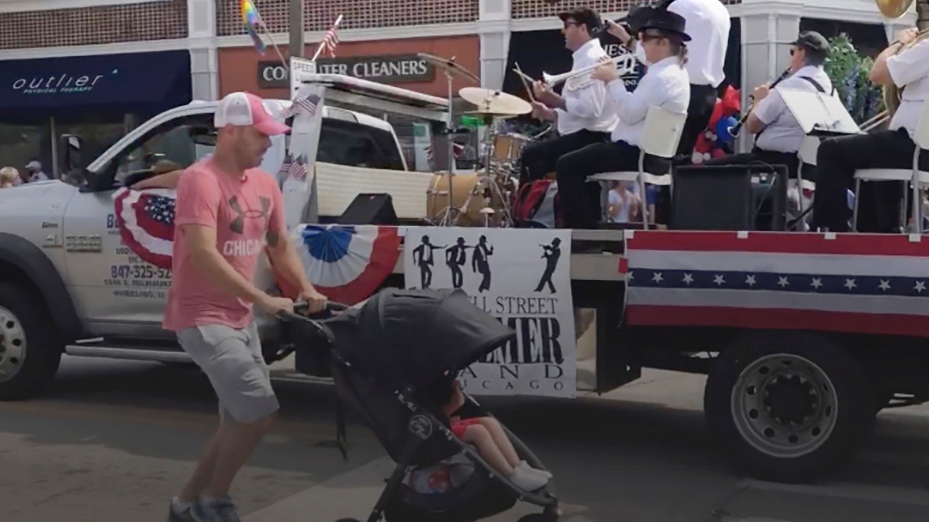 A Fourth of July parade-goer runs for cover after gunfire was heard at the parade, July 4, 2022, in a suburb of Chicago. (Lynn Sweet/Chicago Sun-Times via AP)

Ominous signs of a joyous event suddenly turned to horror filled both sides of Central Avenue where the shooting occurred. Dozens of baby strollers — some bearing American flags, abandoned children’s bikes and a helmet bedecked with images of Cinderella were left behind. Blankets, lawn chairs, coffees and water bottles were knocked over as people fled.

Gina Troiani and her son were lined up with his daycare class ready to walk onto the parade route when she heard a loud sound that she believed was fireworks — until she heard people yell about a shooter. In a video that Troiani shot on her phone, some of the kids are visibly startled at the loud noise, and they scramble to the side of the road as a siren wails nearby.

“We just start running in the opposite direction,” she told The Associated Press.

Her 5-year-old son was riding his bike decorated with red and blue curled ribbons. He and other children in the group held small American flags. The city said on its website that the festivities were to include a children’s bike and pet parade.

Troiani said she pushed her son’s bike, running through the neighbourhood to get back to their car.

“It was just sort of chaos,” she said. “There were people that got separated from their families, looking for them. Others just dropped their wagons, grabbed their kids and started running.”

Debbie Glickman, a Highland Park resident, said she was on a parade float with co-workers and the group was preparing to turn onto the main route when she saw people running from the area.

She didn’t hear any noises or see anyone who appeared to be injured. 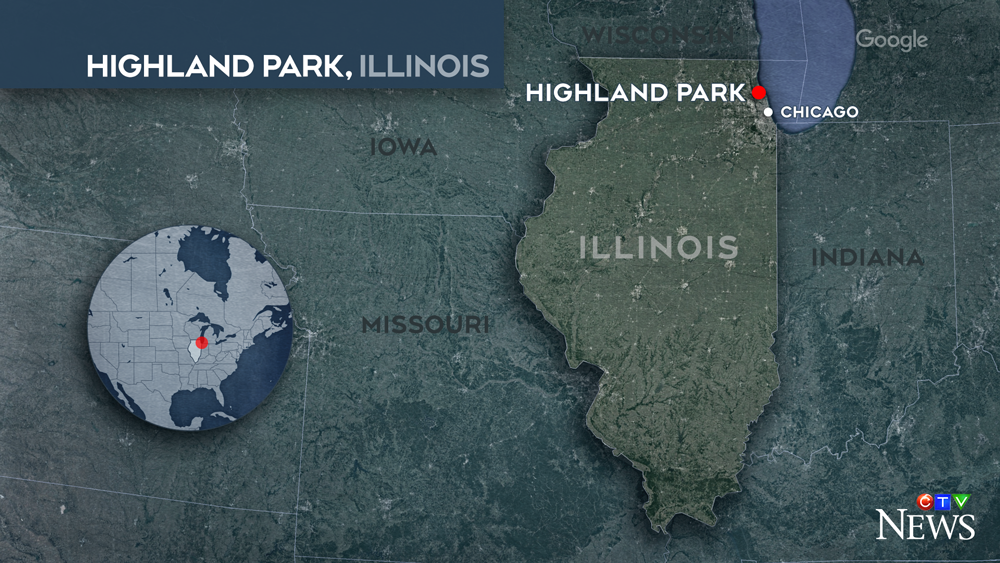