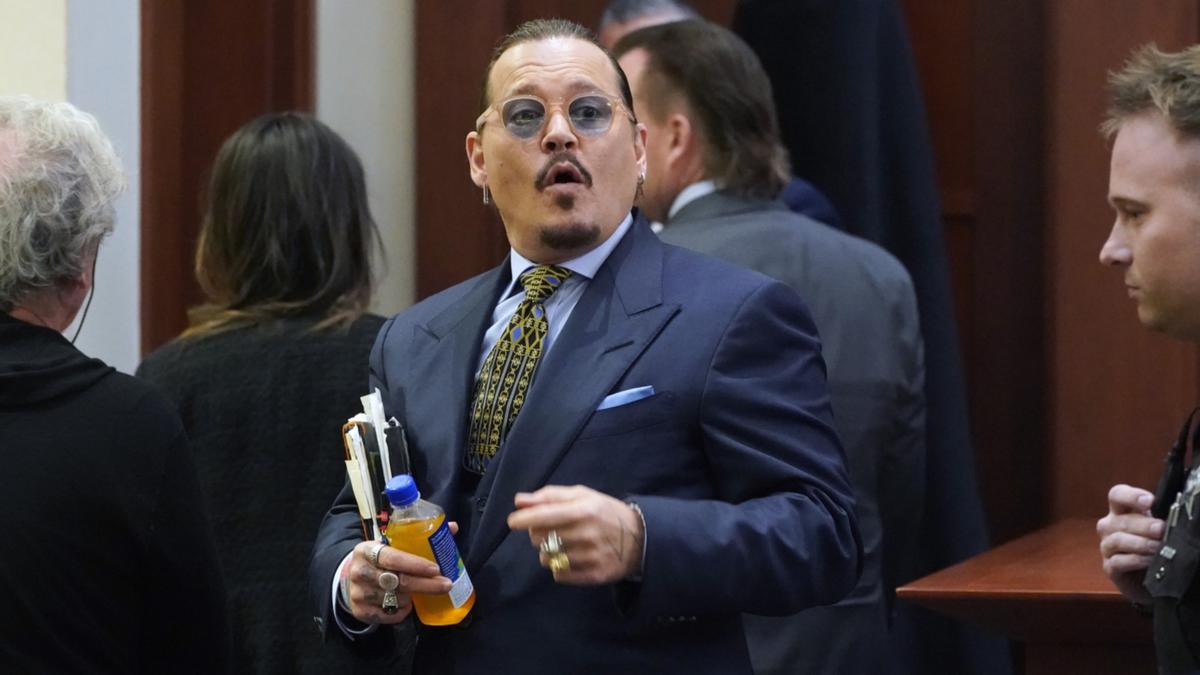 Johnny Depp reacts as ‘wild’ outburst disrupts court case: ‘When are you going to admit this baby is yours?’

Johnny Depp reacted as an outburst interrupted proceedings during his defamation case with Amber Heard.

The incident, which took place on Monday local time, involved a Depp fan who had earlier been involved in a heated confrontation with others who had lined up to get seats inside the Virginia courtroom where the case is ongoing.

For more Celebrity related news and videos check out Celebrity >>

As the court took a mid-morning break after the jury had left, Depp turned to the crowd and waved “as usual”, CourtTV reporter Chanley Painter explained during a segment about the “wild” moment.

“This particular woman had a baby with her and said: ‘I love you Johnny. Our souls are connected. When are you going to admit this baby is yours?’,” Painter added.

Painter said the woman was “promptly removed from the courtroom and her “wristband removed”.

“She will not return to this courtroom,” the reporter said.

The incident was not captured by cameras, which have been live-streaming the case to millions around the globe, but photos appeared to show Depp looking surprised.

The woman reportedly admitted afterwards that it had been a “joke”.

WATCH IN THE VIDEO BELOW: Body language expert gives verdict on Depp and Heard testimonies

Painter added that the outburst showed how “zealous” the fans attending the hearing were.

Earlier, news crews had gathered footage of the same woman embroiled in a heated discussion while waiting in the queue to enter the courtroom as a spectator.

She appeared to be upset that some people had pushed into the queue.

“If you wanna see Johnny Depp then you sit your a** in the chair all night, just like everybody else,” the woman could be heard complaining in footage obtained by CourtTV.

The scenes among those waiting to view the proceedings firsthand were described as being akin to the “Hunger Games”, Painter said.

WATCH IN THE VIDEO BELOW: Spectator who caused outburst at Depp court case argues with fellow fans

During proceedings on Monday, Kathryn Arnold, a producer and entertainment industry consultant, testified that Depp’s career was already in a decline before Heard’s 2018 op-ed piece for The Washington Post.

Arnold said Depp had starred in a number of films that bombed at the box office including “Mortdecai” (2015), “Alice Through the Looking Glass” (2016) and “The Lone Ranger” (2013) in the years leading up to Heard’s piece, which is at the heart of his defamation lawsuit against his former wife.

Reports of poor work habits also made it harder for Hollywood to financially back Depp’s work, according to Arnold.

“Well, we talked about the erratic behavior, the tardiness, the drugs and alcohol abuse,” Arnold testified.

“And the lawsuits have had a really big impact, not just this lawsuit but previously lawsuits that Mr Depp has been involved with because there’s a lot of publicity around anything he does.”

Arnold also referenced a Hollywood Reporter article, which was published before Heard’s piece in the Post, that said Disney was rethinking the future of Depp’s “Pirates of the Caribbean” franchise after diminishing returns on the fifth film.

Denial of responsibility! Verve Times is an automatic aggregator of the all world’s media. In each content, the hyperlink to the primary source is specified. All trademarks belong to their rightful owners, all materials to their authors. If you are the owner of the content and do not want us to publish your materials, please contact us by email – [email protected]. The content will be deleted within 24 hours.
CelebrityEntertainment
0
Share FacebookTwitterGoogle+ReddItWhatsAppPinterestEmail

Is abortion illegal in the U.S. now? Depends where you live

PBA: NLEX gets back on track, beats Meralco