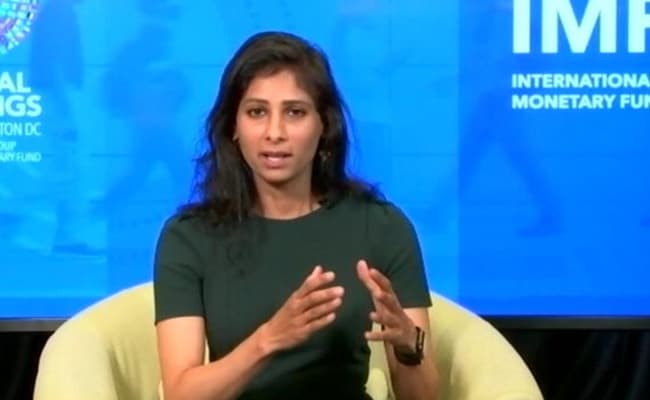 Harvard extended Ms Gopinath’s leave of absence by one year, which allowed her to serve at the IMF for three years, the statement said.

IMF Managing Director Kristalina Georgieva praised Ms Gopinath, who “made history” as the first woman to serve in the top economics post, for her critical analysis during the pandemic.

“Gita’s contribution to the Fund and our membership has been truly remarkable — quite simply, her impact on the IMF’s work has been tremendous,” Georgieva said in a statement.

“We benefitted immensely from her sharp intellect and deep knowledge of international finance and macroeconomics as we navigate through the worst economic crisis since the Great Depression.”

She had a key role in setting global vaccination targets to end the Covid-19 pandemic, and also helped set up a Climate Change team inside the IMF to analyze, among other things, optimal climate mitigation policies, Georgieva said.

Ms Gopinath, a dual US-Indian citizen, was appointed to her role in October 2018.

The IMF said the search for a replacement will begin shortly.

Denial of responsibility! Verve Times is an automatic aggregator of the all world’s media. In each content, the hyperlink to the primary source is specified. All trademarks belong to their rightful owners, all materials to their authors. If you are the owner of the content and do not want us to publish your materials, please contact us by email – [email protected]. The content will be deleted within 24 hours.
Gita GopinathGita Gopinath IMFGita Gopinath newsGita Gopinath quits IMFGita Gopinath to leave IMFGita Gopinath to quit IMFimfIMF chief economist
0
Share FacebookTwitterGoogle+ReddItWhatsAppPinterestEmail

WWE responds after Sasha Banks, Naomi walk out ahead of…

Teslas and other Bluetooth-enabled locks can be hacked