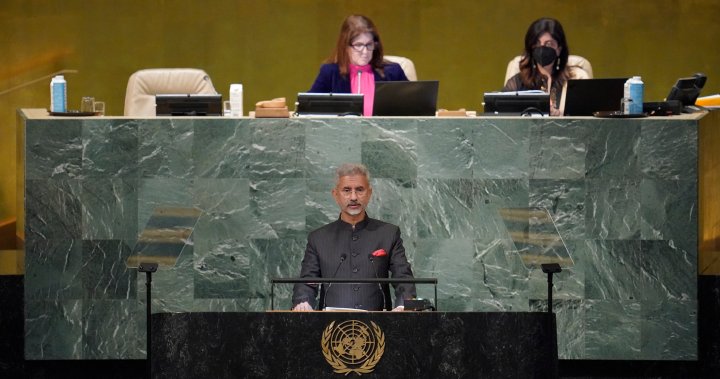 India‘s foreign minister laid out the country’s plans for its turn at the G-20 presidency during his speech Saturday in front of the U.N. General Assembly.

India assumes the mantle of the consortium of leading developed and developing nations in December. Subramanyam Jaishankar said India’s approach would be “based on principles of mutual respect and national ownership with a commitment to sustainable development for all.”

Among India’s priority issues: the growing debt in weak economies, economic expansion, food and energy security, the environment and “the reform of governance of multilateral financial institutions.”

While India has expressed concerns over Russia‘s war in Ukraine, the South Asian country – famously nonaligned during the Cold War – has maintained a neutral stance, refusing to abrogate business ties with Russia and join Western sanctions.

“As the Ukraine conflict continues to rage, we are often asked whose side we are on. And our answer, each time, is straight and honest,” Jaishankar said. “India is on the side of peace and will remain firmly there.”

He called for constructive dialogue, diplomacy and action to resolve the conflict for the sake of all.

“We are on the side of those struggling to make ends meet even as they stare at the escalating costs of food, of fuel and fertilizers,” he added.

Jaishankar repeatedly brought up the scarcity and expense of those three staples and said that India has had to contend with other challenges while “the global attention has been on Ukraine.”

During last year’s high-level meeting, Prime Minister Narendra Modi took aim at India’s neighbors without explicitly naming them. His minister for external affairs proceeded in similar fashion this year, alluding to cross-border terrorist attacks without mentioning either Pakistan or China by name.

“Having borne the brunt of cross-border terrorism for decades, India firmly advocates a zero-tolerance approach,” he said. “In our view, there is no justification for any act of terrorism, regardless of motivation. No rhetoric, however sanctimonious, can ever cover up bloodstains.”

The comment came on the heels of Pakistani Prime Minister Shahbaz Sharif devoting much of his speech Friday to accusing India itself of sponsoring terrorism. Sharif also raised the ever-thorny issue of Kashmir, which – much like Modi last year – Jaishankar did not address during his speech.

Jaishankar touted India’s aid of regional neighbors like Afghanistan, Sri Lanka and Myanmar, as well as its function as a “bridge on some serious but divisive issues” during its expiring term on the U.N. Security Council.

He also acknowledged India’s 75th anniversary of Independence, marked this past August, and pledged to make India a developed country by its 100th centenary and “liberate ourselves from a colonial mindset.”

Denial of responsibility! Verve Times is an automatic aggregator of the all world’s media. In each content, the hyperlink to the primary source is specified. All trademarks belong to their rightful owners, all materials to their authors. If you are the owner of the content and do not want us to publish your materials, please contact us by email – [email protected]. The content will be deleted within 24 hours.
G-20Indiaindia ukraineIndia-RussiaRussiaUkraineUnited NationsUnited Nations General Assembly
0
Share FacebookTwitterGoogle+ReddItWhatsAppPinterestEmail

Avoid eating these things with radish or mooli