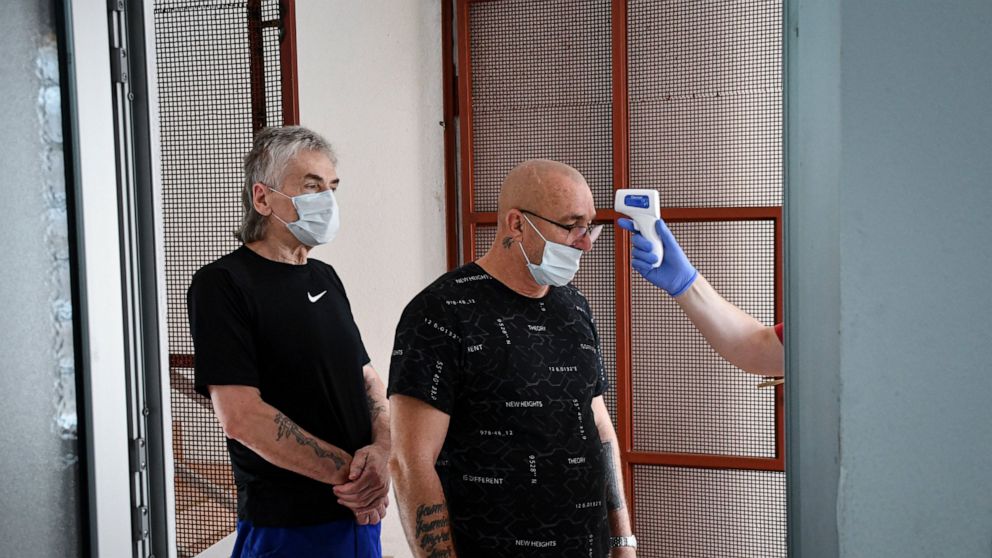 Bosnia’s rate of vaccination against the coronavirus is one of the lowest in Europe, but one population in the Balkan country has bucked the national trend: its prison inmates

SARAJEVO, Bosnia-Herzegovina — Bosnia’s rate of vaccination against the coronavirus is one of the lowest in Europe, but one population in the Balkan country has bucked the national trend: its prison inmates.

Over 80% of the 2,000 men and women serving sentences in Bosnia’s 13 prisons have received at least one dose of a COVID-19 vaccine. That compares to slightly over 27% for the nation as a whole, a rate that results from a lack of takers, not an absence of shots.

Bosnia and most of the rest of the Balkans struggled at the beginning of the year to secure vaccines but had a steady supply of jabs by late spring. While the public demand for shots quickly slowed, interest remained high inside correctional facilities, where authorities say getting vaccinated remains voluntary.

The country’s largest penal institution, the maximum-security prison in the city of Zenica, is a case in point. Over 90% of the prison’s 600 inmates and over 60% of the staff have received two shots after an initial drive to encourage vaccine uptake.

While the overall vaccination rate among all prison employees in Bosnia so far has been lower than among inmates, it is still more than twice as high than the rate in the general population.

Kahric said that getting vaccinated is voluntary for inmates at Zenica and Bosnia’s other prisons. He thinks so many inmates submitted to shots as a matter of convenience; unlike the public at large, prisoners cannot bend or ignore anti-infection rules and must remain quarantined if they come into contact with an infected person.

Prisoners who are eligible for weekend leave also are tested before and after their trips outside. The spread of the virus appears to have generally been better controlled inside than outside Bosnian prisons. Since the start of the pandemic, no major prison outbreaks have been reported.

“Many members of my family got infected, including my mother, so I think that masking up and getting vaccinated is the way to go,” Fahro Kahriman, an inmate at Zanica, said.

In the early days of the pandemic, when most of the world faced shortages of personal protective equipment, Zenica prisoners were put to work sewing face masks as part of the prison’s work program.

The prison produced over 10,000 masks, primarily for in-house use, but also for the Justice Ministry to distribute to other correctional facilities, Kahric said. The program has continued along with the pandemic.

In the past, Zenica prison was notorious for its poor human rights record, but substantial reforms were made in the decade it has been under regular monitoring by relevant European and Bosnian human rights bodies and officials.

Inside the prison’s sewing shop earlier this month, inmates appeared to enjoy light banter while stitching together protective face masks. Most said they freely embraced getting vaccinated against COVID-19, as well as making and wearing face masks as added protection.

Sewing masks is “a way to spend quality time in prison and, at the same time, to contribute to the society,” Kahriman said.

Bosnia, which has a population of 3.3 million, has reported nearly 290,000 virus cases and more than 13,300 COVID-19 deaths in the pandemic, some of the worst infection and mortality rates in Europe.

Denial of responsibility! Verve Times is an automatic aggregator of the all world’s media. In each content, the hyperlink to the primary source is specified. All trademarks belong to their rightful owners, all materials to their authors. If you are the owner of the content and do not want us to publish your materials, please contact us by email – [email protected]. The content will be deleted within 24 hours.
coronavirusCorrectional systemsCOVID-19 PandemicdemographicsDisease outbreaksDiseases and conditionsHealthHealth statistics
0
Share FacebookTwitterGoogle+ReddItWhatsAppPinterestEmail

Rivian R1S and R1T with Max battery packs delayed to 2023

British PM Boris Johnson Says, 90% In ICUs Have Not Had Booster Jab