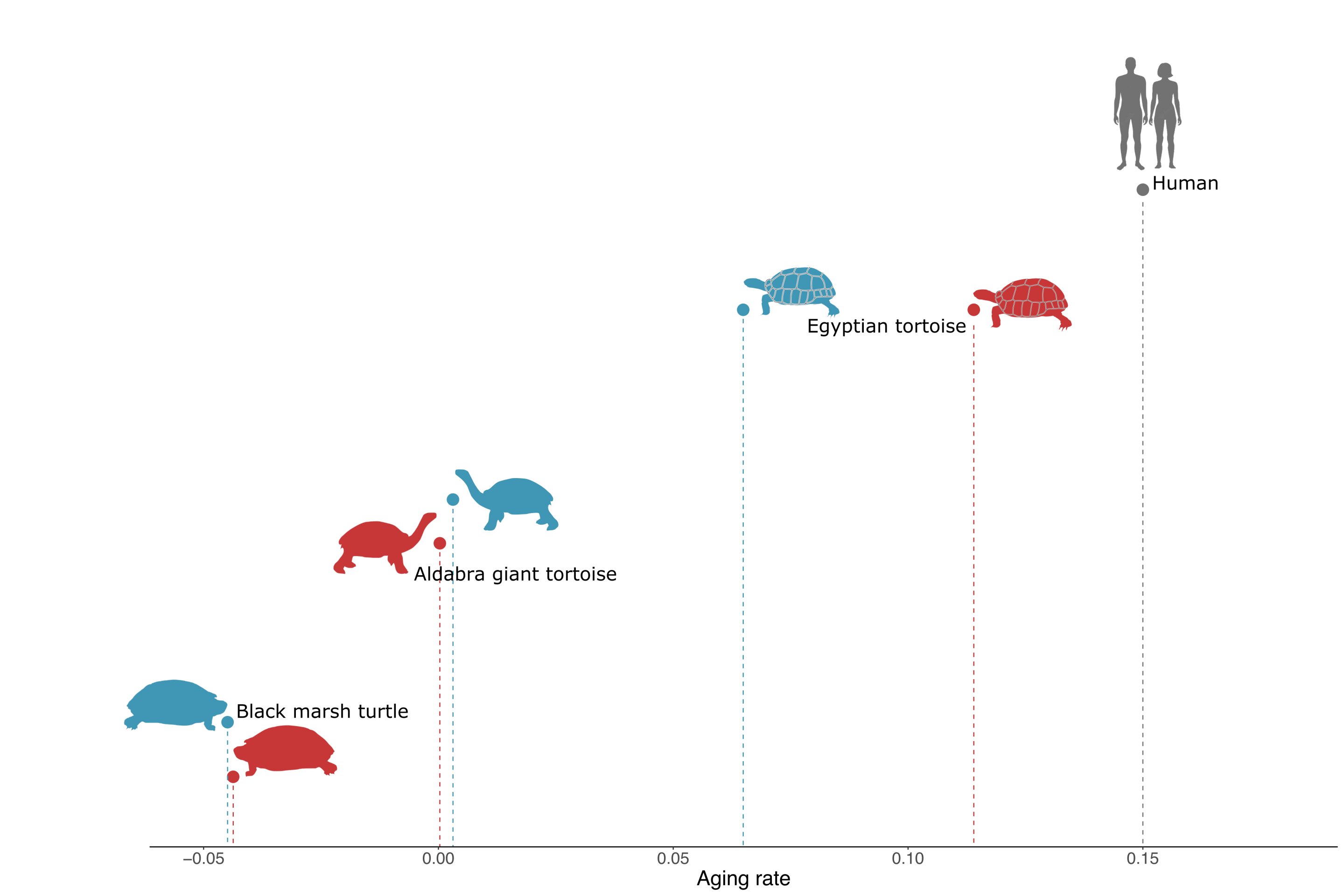 Humans can’t, but turtles can: Switching off senescence

All living organisms age and die—there is no way of escaping death. But not all organisms follow the same pattern of weakening and deterioration to old age and death—counter-intuitive as it may seem.

“Contrary to widespread theories of aging, we show that many species of turtles and tortoises have found a way to slow down or even completely switch off senescence. This means that senescence is not inevitable for all organisms,” said biologist Rita da Silva, who was at University of Southern Denmark when the work was done.

She and other researchers from University of Southern Denmark have published the new study in Science, looking at tortoises and turtles living in zoos and aquariums.

The study finds, that their pattern of aging does not resemble that of humans or other animals: In fact, most of them age slower and in some cases their senescence is negligible.

Out of 52 species, 75% of them show extremely slow senescence, while 80% of them have slower senescence than modern humans.

“We find that some of these species can reduce their rate of senescence in response to the improved living conditions in zoos and aquariums, compared to the wild,” said co-author Dalia Conde, who is an associate professor at Department of Biology, University of Southern Denmark.

Some evolutionary theories predict that senescence appears after sexual maturity as a tradeoff between the energy an individual invests in repairing damages in its cells and tissues, and the energy it invests in reproduction, so its genes are passed to the next generations.

This tradeoff implies among other things that, after reaching sexual maturity, individuals stop growing and start experiencing senescence, a gradual deterioration of bodily functions with age.

Theories predict that such tradeoffs are unavoidable, and thus senescence is inevitable. In fact, this prediction has been confirmed for several species, particularly mammals and birds.

However, organisms that keep growing after sexual maturity, such as turtles and tortoises, are believed to have the potential to keep investing in repairing cellular damage and are thus thought as ideal candidates for reducing and even avoiding the deleterious effects of senescence.

“Note, however, that the fact that some of them show negligible senescence does not mean that they are immortal; it only means that their risk of death does not increase with age, but it is still larger than zero. In short, all of them will eventually die due to unavoidable causes of mortality such as illness,” said another of the researchers behind the study, Fernando Colchero, associate professor at Department of Mathematics and Computer Science, University of Southern Denmark.

Human senescence does not slow under improved living conditions

In the last century, humans have witnessed unprecedented increases in human longevity. Yet, research on humans and non-human primates has shown that improved living conditions does not modify greatly the rate of aging.

Among these species, environmental changes affect mostly infant and juvenile mortality as well as age-independent causes of death such as predation or extreme conditions.

New method for detecting nanoplastics in the human body

Canada to attend G20 summit, even if Putin goes too: Trudeau