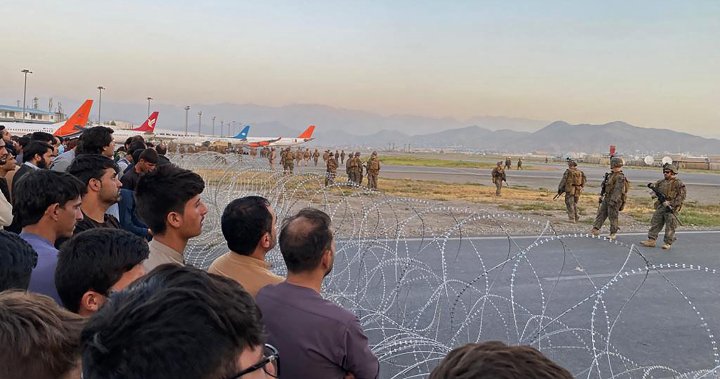 How many Canadians are still in Afghanistan? Government won’t say – National

The government won’t disclose how many Canadians are still stuck on the ground in Afghanistan, citing security reasons as the Taliban tightens their grip on the country and swarm the nation’s capital.

Journalists have faced a torrent of messages in recent days from people in Afghanistan who say they fear for their lives. Many had been told to travel to Kabul, where the Canadian embassy is located, but were greeted by an abandoned building when they arrived.

The unstable situation has many fearing they might be left behind — and an unknown number of Canadians may be in that position.

“Due to the security situation in Afghanistan, Global Affairs is not disclosing the number of Canadians who are registered in the Registration of Canadians Abroad (ROCA) database,” read an emailed statement from a Global Affairs Canada (GAC) spokesperson, sent to Global News Sunday evening.

Insurgents took control of the presidential palace in Kabul on Sunday, declaring in an interview with Al Jazeera TV that “the war is over.” The Taliban took just over a week to seize control over the country after sweeping the country and bulldozing Afghan forces — despite their years of Western training and billions of dollars in foreign-provided equipment.

As the situation heated up, Canada quickly halted diplomatic operations and tore its embassy staff out of the country. But many of those who helped Canadian troops during their time in Afghanistan, including interpreters and their families, remain trapped in the country.

Liberal Leader Justin Trudeau came under criticism from other parties for choosing to call an election on Sunday, as the Taliban descended on Kabul.

“Our democracy, and our democratic institutions are strong enough to be able to ensure that even as we do this important work for Afghanistan, we’re able to check in and make sure that Canadians have their voice on the extraordinarily pressing issues facing them here in this country, right now and for the coming years,” Trudeau said when pressed on the decision.

Canada will be accepting 20,000 Afghans, he added.

“We are extremely concerned about the situation in Afghanistan and I can assure you that officials, and indeed ministers, continue and will continue to weigh in on protecting Canadians, getting Canadians safely out of Afghanistan and continuing to step up as Canada has so many times around the world to bring people to safety,” Trudeau said.

Still, his assurances didn’t spare him from criticism — including from Conservative Leader Erin O’Toole.

“It’s horrible to see the Taliban once again securing control of the country,” he said.

“Canada must work with our allies, and we’re going to be standing up for dignity and for human rights as a government, because Mr. Trudeau has not.”

NDP Leader Jagmeet Singh also tore into Trudeau over the timing of his election call.

“I wouldn’t have called an election,” he said.

“I would be deploying all resources possible to get those that are at risk out of Afghanistan, provide them with help to evacuate not only the people directly impacted, but their families as well.”

Meanwhile, the situation in Afghanistan remains dire. The airport in Kabul has been flooded by Afghans trying to escape the country and fearing they may be left behind. Reports have emerged of revenge killings and brutal tactics from the Taliban in areas they secured in recent days — leaving many desperate to escape the insurgents’ grips.