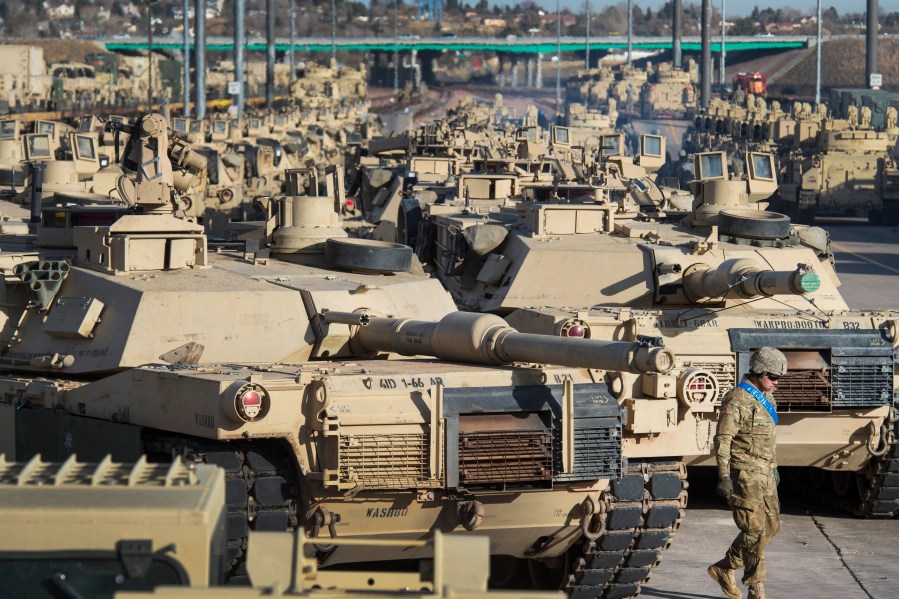 How do M1 tanks compare to Challenger, Leopard tanks?

(NewsNation) — In what would be a reversal, U.S. officials announced Wednesday that they will send 31 M1 Abrams to aid Ukraine, reversing claims they are unsuitable for use in war with Russia.

It is not clear when or how the M1 Abrams tanks would be delivered to Ukraine, or how soon they could have an impact on the battlefield. Military analysts have said Russian forces are thought to be preparing for a spring offensive.

The tank “closes with and destroys the enemy using mobility, firepower, and shock effect,” according to the U.S. Army. It’s built with a 1,500-horsepower turbine engine, 120 mm main gun and special armor making it particularly lethal against heavy armor forces.

It also provides the “lethality, survivability, and fightability necessary to defeat advanced threats well into the future,” according to the Army.

Until now, the U.S. has resisted providing its own M1 Abrams tanks to Ukraine, citing extensive and complex maintenance and logistical challenges with the high-tech vehicles. Washington believes it would be more productive to send German Leopards since many allies have them and Ukrainian troops would need less training than on the more difficult Abrams.

On Tuesday, the Pentagon reiterated the challenges the Abrams posed.

“The M1 (Abrams) is a complex weapons system that is challenging to maintain … that was true yesterday, that is true today and will be true in the future,” Pentagon spokesperson Brigadier General Pat Ryder told reporters.

“We continue to have discussions with Ukrainians and our allies and partners about what are the medium- and long-term defense requirements for Ukraine,” Ryder said.

Meanwhile, the M1 Abrams are seen as unsuitable for Ukraine as they are driven by gas turbine engines with high fuel consumption that would create a challenge for Ukraine to keep them supplied even though they run can also run on diesel.

The Kremlin said on Wednesday that any Abrams battle tanks supplied to Ukraine by the U.S. would “burn,” dismissing the expected delivery as an expensive folly.

Speaking at a daily briefing with reporters, Kremlin spokesman Dmitry Peskov said that while the Abrams shipments were not confirmed, they would be a waste of money.

“I am certain that many experts understand the absurdity of this idea. The plan is disastrous in terms of technology,” he said.

“But above all, it overestimates the potential it will add to the Ukrainian army. These tanks burn just like all the others,” he added.

Kyiv has for months asked for Western tanks that it says it desperately needs to give its forces the firepower and mobility to break through Russian defensive lines and recapture occupied territory in the east and south.

Ukraine forces pull back from Donbas town after onslaught

An alternative to the M1 Abrams is the Leopard 2 tank or Britain’s Challenger 2; however, the Leopard 2 has several advantages over them.

The Leopard 2 runs on a more economical engine that burns diesel, which is also easier to obtain than kerosene.

The British government announced in January it would send a squadron, or 14, of its Challenger 2 battle tanks. However, unlike the Leopard 2, it is not widely used, which limits how many can be made available for Ukraine.

In addition, unlike the M1 Abrams and the Leopard 2 which both have a 120 mm smooth-bore gun, the Challenger 2 has a rifled gun with different ammunition requirements, restricting interoperability.

France has said it was considering sending its Leclerc tank, which has a 120 mm smooth-bore gun, saying all options are on the table. But it has also said French overseas missions limited the number it had available to send and has said the tank’s heavy maintenance demands meant it was not ideal for Ukraine.

The Associated Press and Reuters contributed to this story.