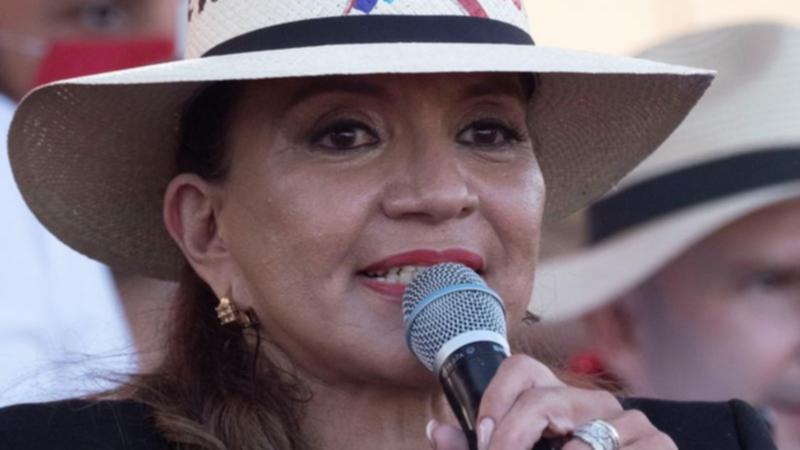 Hondurans have headed to the polls to pick a new president, with leftist candidate Xiomara Castro hoping to oust the right-wing National Party, whose 12-year rule has been beset by graft scandals, chronic unemployment and waves of fleeing migrants.

If she wins, Castro would become Honduras’ first female president and her victory would mark the left’s return to power for the first time since her husband former President Manuel Zelaya was deposed in a 2009 coup.

She has gained favour from voters for her efforts to consolidate opposition to outgoing President Juan Orlando Hernandez, who has denied accusations of having ties to powerful gangs, among other corruption scandals.

Recent polls have reinforced her status as favourite.

“We can’t stay home. This is our moment. This is the moment to kick out the dictatorship,” said Castro, mobbed by reporters just after voting in the town of Catacamas early on Sunday.

The candidate said she trusted that voters would report any problems they see and that international observers would also help to ensure a fair vote.

The election is the latest political flashpoint in Central America, a major source of US-bound migrants and key transit point for drug trafficking, and where concerns over increasingly authoritarian governments have grown.

Castro’s main rival is the National Party’s Nasry Asfura , a wealthy businessman and two-term mayor of the capital Tegucigalpa, who has tried to distance himself from the unpopular incumbent. He was expected to cast his ballot later in the capital.

Polls close at 5pm, and preliminary results are expected three hours later. Some 5.2 million Hondurans are eligible to vote.

Widespread reports of irregularities provoked deadly protests claiming the lives of over two dozen people, but Hernandez’s election win was ultimately rubber-stamped by allies on the electoral council.

Days later, it was vouched for by the government of then-US President Donald Trump.

A large number of national and international election observers are set to monitor Sunday’s voting, including an 80-person delegation from the Washington-based Organization of American States led by former Costa Rican President Luis Guillermo Solis.

“The voice of the Honduran people must be respected and the process must not lead to acts of violence,” Solis told Reuters.

The pre-election tension was showing in some Tegucigalpa neighbourhoods late Saturday, as some businesses boarded up storefront windows, and at least two auto dealerships located in an area near the president’s offices had emptied their lots of cars. The neighbourhood has been the scene of raucous protests in the past.

Political violence has already claimed more than 30 lives this year, including local candidates and activists across all major parties.

Denial of responsibility! Verve Times is an automatic aggregator of the all world’s media. In each content, the hyperlink to the primary source is specified. All trademarks belong to their rightful owners, all materials to their authors. If you are the owner of the content and do not want us to publish your materials, please contact us by email – admin@vervetimes.com. The content will be deleted within 24 hours.
ElectionPolitics
0
Share FacebookTwitterGoogle+ReddItWhatsAppPinterestEmail