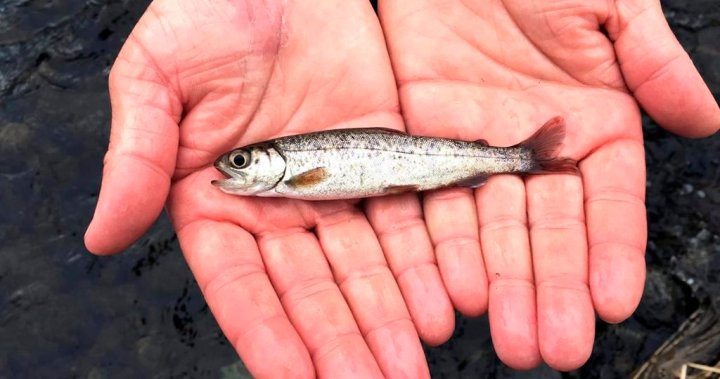 A sweltering heat wave in much of Western Canada in the last week of June had cascading effects on sea life, experts say.

Scott Hinch, director of the Pacific salmon ecology and conservation laboratory at the University of British Columbia, said juvenile salmon such as sockeye, coho and chinook in fresh water would have been most affected by recent heat waves.

“They’re going to be living in fresh water for one to two years and it’s that life history stage, that this particular heat wave and just climate change in fresh water in particular, is going to have some of its greatest effects,” he said in an interview.

Juvenile salmon live in fresh water for up to two years and the heat wave in that part of their life cycle has some of its greatest effects, he said.

Surface waters are warmer than they have been historically, Hinch said.

“And they’re staying warmer longer because of just general increases in air temperatures associated with climate change,” he said.

“The heat waves just make things that much worse.”

Salmon in British Columbia are already at risk due to a combination of factors, including changing climate, mining, logging, habitat loss and the Fraser River landslide.

The Fraser is one of the largest spawning rivers in the world and the landslide, discovered in 2019, decimated early runs of Stuart sockeye and chinook salmon.

Hinch said the ideal water temperature for salmon is between 12 C and 18 C and they can only stand the heat for so long.

Read more:
Up to a billion seashore creatures were cooked to death during B.C. heat wave, researcher says

The heat wave in June where the all-time Canadian temperature record was set saw water in streams hit the mid-20s, “and those are really stressful for juvenile salmon, and lethal,” he said.

“We start seeing really bad things happening when temperatures are at 24 degrees or above.”

There’s a lot less oxygen in warm water and deep water is cooler than the surface, where the juvenile salmon need to feed.

The warmer temperatures also affect plankton and other small fish that salmon eat, he added.

While there is a “sweet zone” that these fish usually call home in lakes during such high temperatures, he said it limits their ability to move around, forage and undertake their normal behaviours.

Now that the top of the lakes are warm, they won’t be cooling soon because churning up the cooler water takes strong air currents and winds that aren’t common in the summer months, he said.

Christopher Harley, a marine biologist at the University of British Columbia, said the recent heat wave saw temperatures higher than 50 C in seabeds and along rocky areas along parts of the shore. Around the same time, the mercury at the Vancouver International Airport hit the mid-30s.

“The rock is very hot and then it’s bouncing all that heat back,” Harley said.

He estimates the heat wave caused the death of more than a billion marine animals along the Pacific coast, including mussels, barnacles, seaweed and sea anemone.

“The more places I visit, the more I realize it’s going to be a lot higher than that. It’s a growing list,” he said of the dying sea life.

Hinch said he’s most troubled about juvenile salmon in small streams that can’t take refuge in deeper areas. Their options are limited to migrating to other waters or simply dying, he said.

“We are going to be leaving a much hotter, hotter world. And how salmon are going to be able to adapt and maintain themselves under those conditions is still the great uncertainty.”

“Just like we predicted it would 30 years ago, but we’re kind of seeing it playing out now.”

Denial of responsibility! Verve Times is an automatic aggregator of the all world’s media. In each content, the hyperlink to the primary source is specified. All trademarks belong to their rightful owners, all materials to their authors. If you are the owner of the content and do not want us to publish your materials, please contact us by email – admin@vervetimes.com. The content will be deleted within 24 hours.
BC Heat WaveDie OffEnvironmentHeatHeat waveMarine LifeOceanocean ecology
0
Share FacebookTwitterGoogle+ReddItWhatsAppPinterestEmail

Solana price: Down 67% from high! Are golden days of this…

No Biden reboot coming from president who thinks he’s…

Common myths about what UK Highway Code changes will mean |…