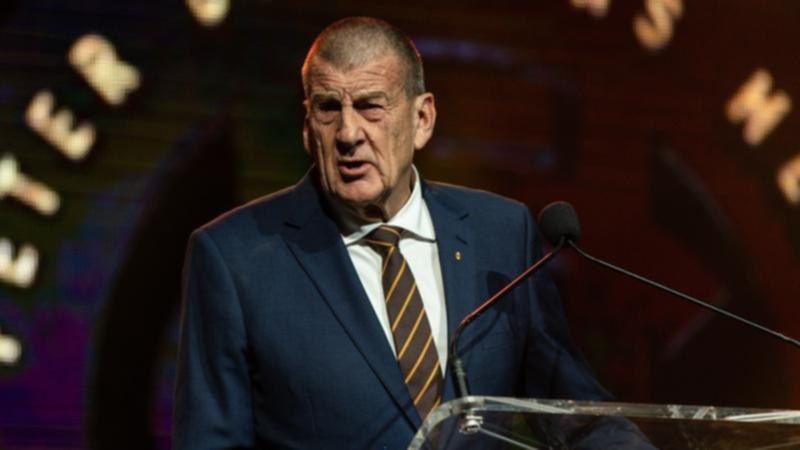 Hawthorn racism: Jeff Kennett describes report as ‘unfair’ and ‘ ‘bump along the highway’ at club awards

Outgoing Hawthorn president Jeff Kennett has called the leaking of racism allegations at the AFL club “unfair” and hopes the unfolding saga can be resolved by the end of the year.

Speaking at the club’s best and fairest awards function on Saturday night, Kennett said the club is not in crisis and has described the issue as a “bump along the highway”.

WATCH THE VIDEO ABOVE: The shocking allegations of racism made against Hawthorn

But he told the audience he was “somewhat flabbergasted – and worse” when he read the draft report of the club’s investigation into the experiences of Indigenous players and their partners while at Hawthorn.

That report was handed to the AFL, which will establish a four-person panel to look at the allegations.

Earlier on Tuesday, Clarkson’s friend and Richmond coach Damien Hardwick said at a function in Perth that Clarkson is “not in a great place”.

On Saturday, The Age also had a report alleging that Clarkson was unsympathetic to Sam Mitchell, now Hawthorn’s coach, when he was playing under him and dealing with family issues.

Clarkson, who was recruited by North Melbourne, and Fagan have stood down from their coaching duties.

“I do not consider this to be a crisis,” Kennett said at the best and fairest night.

“When I read the draft report … I was somewhat flabbergasted – and worse.

“It wasn’t a good read. I hope this matter can be resolved quickly by all parties involved.”

Kennett said the people interviewed for the report had requested confidentiality and Hawthorn respected that.

Calls for players to boycott game, AFLPA concerns of league ‘conflict of interest’

“Sadly, they made a decision to talk to the press … they named people with whom they had very real issues,” he said.

“That was unfair to those (people), so therefore we need to have this resolved.

“I don’t see this is as a crisis – I know this club, I know its history and I know its strength.

“We will deal with this and assist in any way we can.”

Kennett also said the issues were historic and called on any Hawthorn employees to tell the club at the time if they believe inappropriate behaviour has happened.

“The one thing the investigation showed was that we have a safe cultural workplace now. So these are issues of the past,” he said.

He hopes there can be some form of mediation so any issues can be resolved quickly.

“It could be resolved before the end of the year so people can get on with their lives,” he said.

At the end of his speech, Kennett again insisted the Hawks would “overcome” the issue.

“Understand this as being a bump along the highway, but … it is an important bump and it has to be dealt with professionally,” he said.

“I will not accept the fact that we as a club cannot overcome this latest issue.

“We have the people, we have the desire and we have that indelible ingredient which is togetherness.”

Meanwhile, Hardwick was quoted as speaking at a function before the WAFL grand final.

“He’s not in a great place, let’s be perfectly honest,” Hardwick said of Clarkson.

“To have that accusation and alleged incidents thrown at you and then splashed across the media when you don’t have an opportunity to defend yourself is incredibly disheartening and probably a little bit distasteful.”

Mitchell did not refer to the latest allegations against Clarkson involving him or the racism claims in his speech at the Hawthorn best and fairest count.

Denial of responsibility! Verve Times is an automatic aggregator of the all world’s media. In each content, the hyperlink to the primary source is specified. All trademarks belong to their rightful owners, all materials to their authors. If you are the owner of the content and do not want us to publish your materials, please contact us by email – [email protected]. The content will be deleted within 24 hours.
AFLHawthorn Hawkssport
0
Share FacebookTwitterGoogle+ReddItWhatsAppPinterestEmail

India’s Cleanest City Has No Garbage Bins, Earns Crores of Rupees from Its Waste

Big Movers on D-St: What should investors do with Bank Of…

Drug addict who fatally dropped six-month-old baby on his…