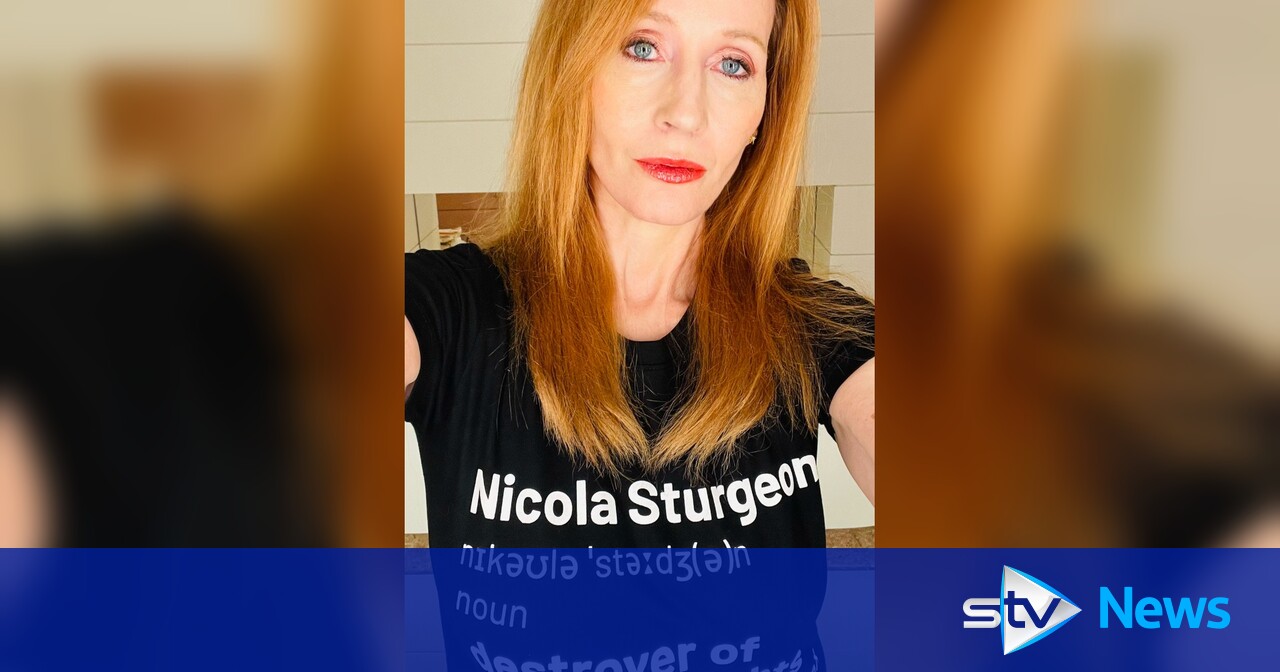 JK Rowling has shared a photograph of her wearing a T-shirt criticising First Minister Nicola Sturgeon over the issue of gender reform.

The author, who wrote the multimillion selling Harry Potter series of books, posted a photo on Twitter of wearing the garment, which features the words: “Nicola Sturgeon: Destroyer of women’s rights.”

She shared the photo as women gathered in front of the Scottish Parliament on Thursday to protest a move by a Holyrood committee to back controversial legislation that aims to make it easier for transgender people to be legally recognised as their preferred gender.

In June 2020, Rowling wrote an essay explaining how she was partly motivated to speak about transgender issues because of her experience of domestic abuse and sexual assault.

But critics have accused the writer of being transphobic, an allegation which she strongly denies.

The author has also continued to be vocal on her views on transgender people and biological sex. Earlier this year, she contacted police after campaigners posted a photograph of her Edinburgh house in November that revealed the property’s address.

It included trans activists standing by the house and carrying placards with slogans such as “trans liberation now”.

Police Scotland confirmed inquiries were carried out and no criminality was established.

What exactly has the Holyrood committee backed?

A majority of MSPs on the Equalities, Human Rights and Civil Justice Committee have recommended the general principles of the Gender Recognition Reform (Scotland) Bill should be approved.

Committee convener Joe FitzPatrick said: “We believe these important reforms will improve the lives and experiences of trans people.”

Papers lodged alongside the Bill by the Scottish Government estimate the changes could result in the number of people applying for a Gender Recognition Certificate (GRC) increasing from 30 a year to 250-300.

Five MSPs on the committee backed the legislation but the two Conservatives – Pam Gosal and Rachael Hamilton – opposed it.

The Bill sets out plans to speed up the time it takes to obtain a GRC, and also lowers the age for obtaining one from 18 to 16.

A medical diagnosis of gender dysphoria would no longer be required, removing the requirement for doctors’ reports.

The period of time someone must have lived in their “acquired gender” before applying would be reduced from two years to three months under the legislation – although a three-month “reflection period” would be introduced to the process.

A previous consultation by the Scottish Government found 60% of respondents backed moving to a system of self-declaration.

A majority of MSPs on the committee backed removing the need for any medical evidence or diagnosis “believing that trans people know their own minds”.

What concerns do people have about gender reform?

Some fear the reforms “could potentially mean the process is open to abuse from bad faith actors, particularly predatory men”.

Concerns have also been raised about the impact the reforms could have on single-sex spaces for women and girls – such as female-only toilets or changing rooms.

The report – published ahead of a demonstration outside Holyrood – said most MSPs on the committee agree that while such views are “sincerely held”, they are satisfied the Bill would not change any of the existing protections women have under the Equality Act 2010, “including the ability to exclude trans people from single-sex services where proportionate and appropriate”.

The committee report said: “The majority is satisfied that the Bill will not change or remove women’s rights, make changes to how toilets and changing rooms operate, redefine what a man or a woman is, nor change or expand trans people’s rights.”

FitzPatrick said MSPs had heard a “wide range of views” while scrutinising the legislation.

He added: “Whilst not all the committee agreed, for the majority of our members it is clear that now is the time for reform of the gender recognition process and we support the general principles within the Bill.

“We believe these important reforms will improve the lives and experiences of trans people.”

Social justice secretary Shona Robison welcomed the committee’s support for the principles of the Bill, saying this would “reform the system for obtaining a Gender Recognition Certificate in Scotland”.

She added: “Legal gender recognition has been available for 18 years but many find the current system for obtaining a Gender Recognition Certificate to be intrusive, medicalised and bureaucratic.

“This Bill aims to simplify and improve the process for a trans person to gain legal recognition, giving them better access to their existing rights.

“Our support for trans rights does not conflict with our continued strong commitment to uphold the rights and protections that women and girls currently have under the 2010 Equality Act. This Bill makes no changes to that Act.

“We will carefully consider the committee’s report ahead of the next stages of the Bill.”

Elon Musk may have lost his Midas touch