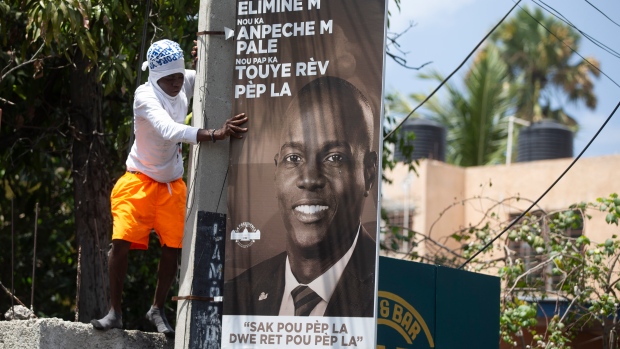 NEW YORK —
Colombian President Ivan Duque said Wednesday there is evidence and testimony that seriously implicate “practically all” of the former Colombian soldiers being held in Haiti in the assassination of that country’s president, Jovenel Moise.

In an interview with The Associated Press, Duque said the arrested ex-soldiers still need to be tried, but that “clearly, based on the testimony of many,” it is evident “that there is a level of implication” in the July 7 killing of Moise, who was assassinated at his home in Haiti’s capital, Port-au-Prince.

More than 40 people have been arrested in Haiti in connection with the killing, including several Haitian police officers, a former Haitian senator and 18 former Colombian soldiers.

Duque struck a harsher tone than in the past regarding the Colombians held in Haiti since shortly after the killing. Previously, he had said a small group of recruiters knew what the real intention of the ex-soldiers’ trip to Haiti was and they misrepresented the goal of the mission to the former soldiers.

The president told AP on Wednesday that he never said the former soldiers were misled.

“I have always said that an investigation has to be carried out, and the investigation has been done, and in fact the Colombian police contributed,” he said. “And in fact, one of the people who fled from Haiti, who was later captured, talked about the level of involvement.”

Duque seemed to be referring to Mario Antonio Jose Palacios, identified as one of the main suspects in Moise’s murder. He is detained in Florida. According to the accusations, Palacios spoke voluntarily and said he was hired to travel to Haiti to offer security and participate in a purported operation to arrest the president.

Families of the ex-soldiers have complained that the detainees have not been able to defend themselves in Haiti and do not have lawyers.

In July, Duque said that “within the group (of former soldiers) there were people who had received different instructions.” Even so, the president pointed out that “regardless of the level of knowledge one had,” it was clear the entire group participated in the assassination.

That same month he also told a radio station that “everything indicates a large group of people who arrived in Haiti were `blindfolded,’ taken for a supposed protection mission, while others, a small group apparently, had detailed knowledge of the criminal operation and the intent to kill the president of Haiti.”

On Wednesday, Duque said Colombia’s hands are tied in the judicial process in Haiti.

“We can try to work diplomatically to guarantee that the trial be carried out earlier and that they have a minimum of conditions as inmates. But beyond that, Colombia cannot act, because clearly there are some facts. There are some accusations. There are some testimonies,” the president said.

Duque, a conservative who cannot seek re-election in Colombia’s May 29 presidential election. also spoke about the socialist government of President Nicolas Maduro in neighboring Venezuela.

In 2019, Duque said that Maduro’s administration “had very few hours left.” On Wednesday he acknowledged receiving criticism for making that comment.

“Maybe, if you look at it in hindsight, maybe if I looked at it with a self-critical sense, I would say, well, I shouldn’t have done it,” Duque said. “But what I can say clearly is that, thank God, we raised our voice. Thank God, more than 50 countries reject that dictatorship.”

bank of india share price: Big Movers on D-St: What should…