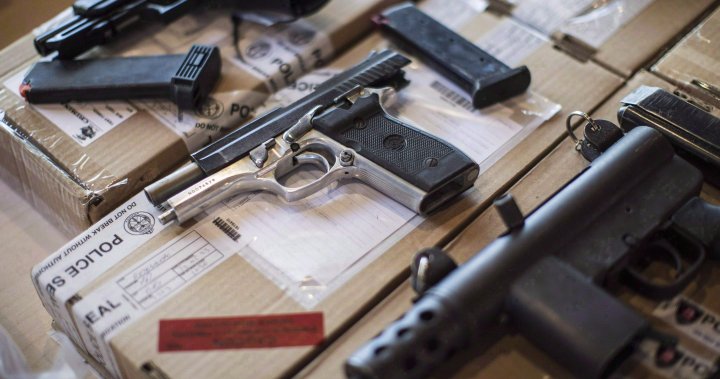 Gun control advocates and the mayors of several large Canadian cities are welcoming the federal government’s proposed freeze on the sale and transfer of handguns, a central feature of new firearm legislation that is also angering some gun owners.

The freeze was an unexpected addition to the new Bill C-21, which also seeks to take away guns and firearm licences from domestic abusers and crack down on gun smuggling and trafficking.

“These are substantial, effective, popular and historical measures that will take Canada in the right direction,” Nathalie Provost, a survivor of the 1989 mass shooting at Polytechnique, said in a statement shared by prominent advocacy group PolySeSouvient.

Ottawa is moving to freeze handgun sales nationwide. Here’s what that means

The legislation tabled in Parliament on Monday replaces a previous version of Bill C-21 that expired when last year’s election was called, and did not include the nationwide freeze on selling, buying, importing and transferring handguns.

The Liberals had previously promised to support provinces and territories that wanted to pursue a full ban, which gun control advocates argued would create a patchwork of ineffective rules across the country.

Under the new legislation, existing handgun owners would be allowed to keep their firearms but would only be allowed to sell or transfer to businesses and exempt individuals, chiefly valuable goods carriers and sport shooters.

The bill would not ban handguns, but rather seek to cap the number already in Canada.

Provost, who attended Monday’s announcement along with other gun violence victims, survivors and advocates, said the inclusion of the nationwide freeze shows the government is listening to those groups.

However, she and other members of PolySeSouvient said they were hopeful the final version of the bill will include a complete ban on assault-style weapons like the one used in the Polytechnique massacre.

Public Safety Minister Marco Mendicino promised Monday to make sure such firearms are automatically prohibited when they enter the market in future. A mandatory buyback program for those weapons is set to begin by the end of this year.

“Given today’s extremely positive announcements, I’m very much inclined to believe (Mendicino’s promise),” Suzanne Laplante-Edward, whose daughter Anne-Marie was killed at Polytechnique, said in a statement. “We will just have to wait a few more months.”

For now, advocates say the national handgun freeze is a welcome start.

“It will have a measurable impact to our ER,” Dr. Brett Mador, a trauma and general surgeon at the University of Alberta Hospital and a member of Canadian Doctors for Protection from Guns, told Global News.

“As health-care providers, we are trying to treat disease but also trying to prevent it, and every gunshot is preventable.”

The number of registered handguns in Canada increased by 71 per cent between 2010 and 2020, reaching approximately 1.1 million, according to federal statistics. Handguns were the most serious weapon present in the majority of firearm-related violent crimes between 2009 and 2020.

NDP public safety critic Alistair MacGregor said his party wants to believe the announcement is an urgent priority and not just another political stunt.

“If the Liberals are finally serious this time, New Democrats are here to get this done,” he said in a statement. “We are committed to addressing gun violence and making our communities safer.”

Mayors of Canada’s largest cities said they were thankful the federal government moved to effectively ban handguns on a national level, rather than leaving it up to provinces and municipalities.

Toronto Mayor John Tory welcomed the proposed handgun freeze as a “step in the right direction.”

“Gun violence is a national problem requiring national solutions,” he said. “Toronto city council has been clear that it supports a national handgun ban.”

“As I have said before, guns have no place in our cities,” he said in a statement, adding he will continue to pursue actions that crack down on other sources of gun violence including untraceable “ghost” guns and illegally imported weapons.

Montreal Mayor Valerie Plante also expressed hope that the freeze will lead to a national handgun ban, while also applauding the steps laid out in the new legislation.

Prior to the announcement, Calgary Mayor Jyoti Gondek said Monday she was hopeful such restrictions would not be “shoved” to municipalities to deal with.

“They need to take care of us here,” she told reporters.

The bill would also allow for the automatic removal of gun licences from people who commit domestic violence or engage in criminal harassment, such as stalking.

In addition, it would create a new “red flag” law allowing courts to require that people considered a danger to themselves or others surrender their firearms to police.

The government says the measure would guard the safety of those applying through the court process, often women in danger of domestic abuse, by protecting their identities. The decision to shield those identities would be up to a judge’s discretion.

“We love to see it,” said Angela Marie MacDougall, executive director of Battered Women’s Support Services in Vancouver, when asked in an interview about the new legislation.

“We think that gun control is just one part of an effective strategy in preventing femicide.”

Statistics Canada found in 2019 that a woman in Canada is killed by her intimate partner about once every six days.

Yet some firearm owners are expressing frustration, arguing the new law, if passed, will do little to target criminals and the gun violence they unleash.

“We follow the rules and abide by the laws and look after our firearms and we are scapegoats. They are on the attack.”

A Global News investigation found many guns used by criminals in Canada came from the U.S. through illegal trafficking.

Handguns present in most firearm-related violent crimes in Canada: report

While the Conservative Party said it welcomes those measures, which give new authority to border agents to deny entry to criminally-involved foreign nationals and to investigate transborder crime, it said the full bill will not make Canadians safer.

“Today’s announcement once again proves Liberals are focused on headlines, not on safety,” public safety critic Raquel Dancho said in a statement.

Cox agrees, saying only law-abiding gun owners will be targeted. He’s also worried that the proposed laws will cause his business and other shooting ranges to suffer.

“The problems associated with bullets flying in the streets of our urban and rural communities have virtually nothing to do with legal, law-abiding gun owners taking their firearms to and from shooting ranges,” said Rod Giltaca, CEO and executive director of the Canadian Coalition for Firearm Rights, in an interview.

“This looks to be a lot more political than it is about public safety.”

Prime Minister Justin Trudeau noted repeatedly on Monday that the legislation will not go after the “vast majority” of gun owners, who he said “are responsible and follow the law.”

“We are, however, facing a level of gun violence in our communities that is unacceptable, which is why we are acting” though this latest legislation, he told reporters.

–With files from Adam Toy, Abigail Bimman and the Canadian Press

Denial of responsibility! Verve Times is an automatic aggregator of the all world’s media. In each content, the hyperlink to the primary source is specified. All trademarks belong to their rightful owners, all materials to their authors. If you are the owner of the content and do not want us to publish your materials, please contact us by email – [email protected]. The content will be deleted within 24 hours.
CanadaCanada gun controlCanada handgun banCanada. NewsFirearmsGun controlGun Control BillGun Control Canada
0
Share FacebookTwitterGoogle+ReddItWhatsAppPinterestEmail