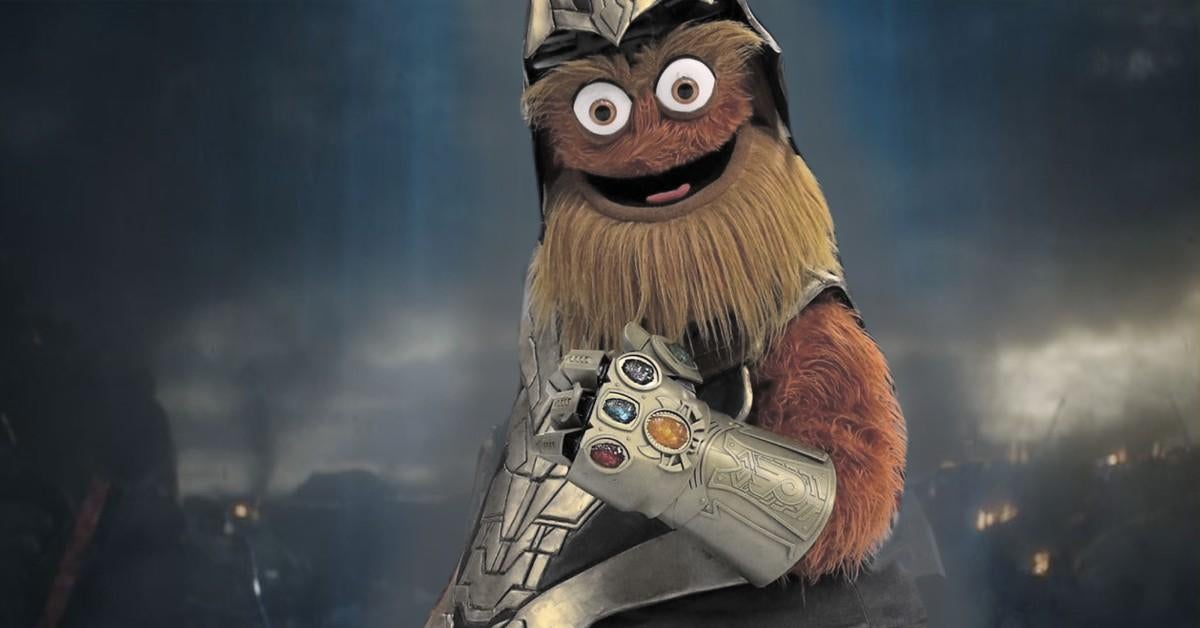 Gritty Dresses as Thanos at NHL Game in Viral Tweets

Ever the one to court online controversy, and an expert at grabbing headiness for his online antics, Philadelphia Flyers mascot Gritty took to the ice tonight in a surprise get-up, dressed as the Mad Titan himself, Thanos. The mascot appeared in the character’s attire, complete with an Infinity Gauntlet, as a part of the “Marvel Super Hero Day” for the NHL team. Gritty posted a video of him getting into costume as well as a few shots of him on the ice which you can find below. Accompanying him were two cohorts with Captain American and Iron Man masks, but their outfits can’t compare to Gritty’s. Check it out!

Josh Brolin previously took on the role of Thanos in four Marvel Studios movies, appearing in Guardians of the Galaxy for one scene, making a cameo in Avengers: Age of Ultron, and then starring in Avengers: Infinity War & Avengers: Endgame. Despite dying twice in the 2019 feature, Brolin’s character doesn’t seem to be fully finished either, as the actor reprised him once again for Marvel’s What If…? animated series that premiered last year. It seems likely he’ll be back for yet another episode of the show as well as at least one story where he’ll seemingly appear was bumped to the second season of the show.

I am inevitable. @Marvel pic.twitter.com/tYdzQfL2SI

Despite getting dusted, Thanos’ presence still looms large in the MCU and references to the Mad Titan abound. Marvel’s Hawkeye TV series made headlines when it was airing due to the amount of “Thanos was right” mugs that characters drank out of throughout the show, plus Marvel’s Eternals feature film namedropped him more than once. That film also concluded with Eros, the brother of Thanos, making his MCU debut. Despite all that there was never a chance that Thanos was going to cameo in the film.

“It honestly wasn’t (on the table),” Eternals producer Nate Moore previosuyl revealed to ComicBook.com’s Phase Zero podcast. “We knew this was a post-Endgame movie and I think to bring him [Thanos] back that quickly even, would’ve been crazy…As a fan I would’ve been like, ‘Really guys? You literally just got rid of that guy, you brought him back.'”

“It doesn’t mean the idea of Thanos is gone. Obviously, if you seen the film in the of tags, that’s an idea that will continue, I think, to bear fruit, and that we’ll explore,” the producer added. “Because there’s so much about Thanos we don’t know, even though we do know a lot. But that character at no point was ever in any draft of a script or a trim or anything.”

Denial of responsibility! Verve Times is an automatic aggregator of the all world’s media. In each content, the hyperlink to the primary source is specified. All trademarks belong to their rightful owners, all materials to their authors. If you are the owner of the content and do not want us to publish your materials, please contact us by email – [email protected]. The content will be deleted within 24 hours.
Avengers: Endgameavengers: infinity warEternalsGrittyNHLThanos
0
Share FacebookTwitterGoogle+ReddItWhatsAppPinterestEmail