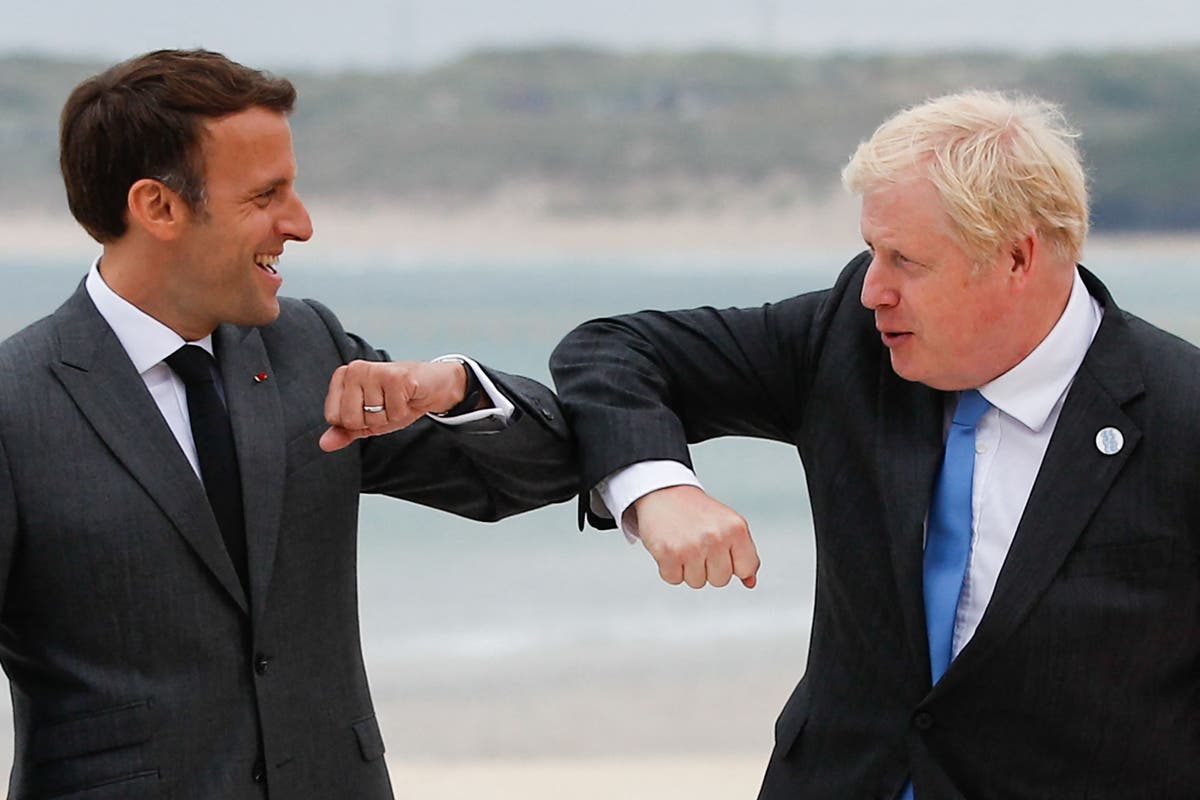 The Elysee Palace has rejected claims that Emmanuel Macron confused the constitutional status of Northern Ireland in a conversation with Boris Johnson at the G7 summit in Cornwall.

Reports today suggested that a mix-up on NI had sparked an outburst from Mr Johnson that EU leaders had to get the importance of the territorial integrity of the UK “into their heads”.

However, Mr Macron’s office has said the French leader had only pointed out that mainland Britain and Northern Ireland were on two different islands after Mr Johnson asked him whether he would accept a ban on movements of sausages between Toulouse and Paris.

Downing Street has it will not discuss the details of the incident.

Meanwhile, David Attenborough told G7 leaders that they face some of the most important decisions in human history as he called for stronger action on the climate crisis.

“We know in detail what is happening to our planet, and we know many of the things we need to do during this decade,” the British environmentalist told G7 leaders in a recorded video address on the final day of G7 talks in Cornwall.

“Tackling climate change is now as much a political and communications challenge as it is a scientific or technological one,” he said, according to Reuters. “We have the skills to address it in time, all we need is the global will to do so.”

Why the last day of the G7 summit may be the last chance to find billions for the climate emergencyG7 attendees 2021: Which leaders will be at summit?UK to donate 30 million vaccines to poorer countries by end of year, with five million by September

Boris Johnson says the G7 have pledged over 1 billion coronavirus vaccine doses for poorer nations — far short of the 11 billion doses sought by the Wold Health Organization (WHO).

He said the doses would come both directly and through the international COVAX program.

It was one of a series of commitments announced at thr end of the three-day summit in Cornwall.

Cutting foreign aid spending is bad for the UK’s reputation and will make it harder for Boris Johnson to bring the international community together on key issues, a former minister has said.

“Is there enough money to drive forward the vaccination of the world, which is the Prime Minister’s ambition and upon which our national interest and our welfare depend in the future?” he continued. “I think the jury so far is out on that, we’ll see whether the summit communique commits the richest countries to step up to the plate.”

However, he said: “I have to say it has been more difficult for the Prime Minister to do that when in the previous two global summits in Birmingham and in Gleneagles Britain really led from the front on development, on tackling poverty, on bringing the world together on that agenda.”

“It has been more difficult to do that this time because Britain is the only G7 country that is reversing that, it’s cutting its aid when all the others are either increasing it or keeping it at the same level,” Mr Mitchell said, noting the Government’s decision to suspend the foreign aid guarantee to spend 0.7% of national income.

Instead the Government will cut that to 0.5% due to the coronavirus pandemic.

Asked whether the UK’s aid cut makes the Conservative Party look like the “nasty party”, he said: “We are a big-hearted, broad party that really care about these issues.”

“I worry that in the rather mean and almost Dickensian approach to our development spending, where we’ve cut it in the middle of a pandemic, in breach of the promises we all made, all 650 of us at the last general election, arguably in breach of the law, very senior lawyers in Britain have said this is unlawful because it is not missing the target, it’s changing the target to 0.5%,” he said

G7 leaders have agreed to ramp up their production and deliveries of Covid-19 vaccines around the world, European Union Council President Charles Michel has said.

“The priority was to ensure we can meet the demand for vaccines, and here the EU has taken the leadership. Partners have now joined us to accelerate production and delivery of vaccines worldwide,” Michel said in a video post on Twitter.

A draft of the G7 communique on Sunday said the group would commit to providing 1 billion COVID-19 vaccine doses over the next year and work with the private sector, the G20 and other nations to boost the flow of vaccines in the future, according to Reuters.

G7 leaders to call for ‘transparent’ study into Covid-19 origins

Group of Seven leaders will reportedly call for a transparent and science-based study into the origins of Covid-19 to be convened by the World Health Organization.

In a draft communique, leaders call for a “timely, transparent, expert-led and science-based WHO-convened Phase 2 Covid-19 Origins study,” according to Reuters.

The communique is reportedly almost finalised.

The Elysee Palace has rejected claims that Emmanuel Macron confused the constitutional status of Northern Ireland in a conversation with Boris Johnson at the G7 summit in Cornwall.

Reports today suggested that the supposed mix-up sparked an outburst from Mr Johnson that EU leaders had to “get into their heads” the importance of the territorial integrity of the UK.

However, Mr Macron’s office has said the French leader had merely been pointing out that mainland Britain and Northern Ireland were on two different islands, after Mr Johnson questioned him on whether he would accept a ban on movements of sausages between Toulouse and Paris.

“We know in detail what is happening to our planet, and we know many of the things we need to do during this decade,” he said in a recorded video address on the final day of the summit in Cornwall.

“Tackling climate change is now as much a political and communications challenge as it is a scientific or technological one,” he said, according to Reuters. “We have the skills to address it in time, all we need is the global will to do so.”

US President Joe Biden told a Catholic priest “many serious matters” were discussed at this year’s G7 summit as he attended morning Mass in Cornwall on Sunday.

Father Philip Dyson told the PA news agency that he not been given advance warning that the president and his wife would be attending the service.

“We realised people were coming with security so I thought maybe the president would be coming along so we just welcomed him,” he said.

The priest said he felt nervous leading the service with the Bidens in attendance.

“It’s the President of the United States of America,” he said.

Still, he said: “It’s a great occasion to welcome him into our parish, into the church, and it’s lovely to know he made the time in his busy schedule in order to come to Mass.”

Father Dyson said he even managed to have a “quick word” with the US leader.

“I welcomed him to Cornwall and he said he was enjoying his time here and there were many serious matters they were discussing and just hope it’s going to come to fruition,” he said.

“I think the G7 has been such a great occasion,” he added. “The scripture readings were appropriate because it was about creation and climate, and things growing, so it absolutely suited the occasion.”

Father Dyson said the scriptures had not been inspired by the G7 summit, during which climate talks have been a major focus.

“It’s just the way it always is. The word of God always fits in,” he said.

The event came with the prime minister widely expected to use a Downing Street press conference on Monday to announce a delay in the next stage of England’s route out of coronavirus lockdown.

No 10 said there were fewer than 30 guests, the event was outside and all participants in the summit have a daily testing regime.

“The event last night was done in an entirely Covid-secure way within the existing rules,” the prime minister’s official spokesman said.

“This was an informal gathering of the G7 leaders and rightly it is held in private … but you can see it was a relaxed atmosphere and gave the leaders a chance to discuss outside of a formal setting.”

The dinner was cooked by Simon Stallard, from the Hidden Hut in Portscatho, and included beef, lobster and other local fish.

US President Joe Biden and First Lady Jill Biden have attended morning Mass in Cornwall on the final day of the G7 summit.

The couple arrived at the Sacred Heart and St Ia Catholic Church in St Ives, a short drive from where they have been staying in Carbis Bay, at 9.15am and left just after 9.40am.

Asked for his thoughts on the church, Mr Biden said it was “beautiful”.

He did not answer a question about the G7 and China.

The president is open about his Catholic faith and famously visited the St Joseph on the Brandywine Roman Catholic Church in Delaware on the morning of the US election last November.

His speeches regularly include biblical references and he reportedly received a congratulatory phone call from Pope Francis after winning last year’s election.

ICYMI: As Biden talks climate on the world stage, his own green plans are in danger

Joe Biden’s early ambition is running smack into political reality, both at home and abroad, writes my colleague Andrew Naughtie:

Murder Trial in Sweden Could Shine Unsavory Light on Iran’s…