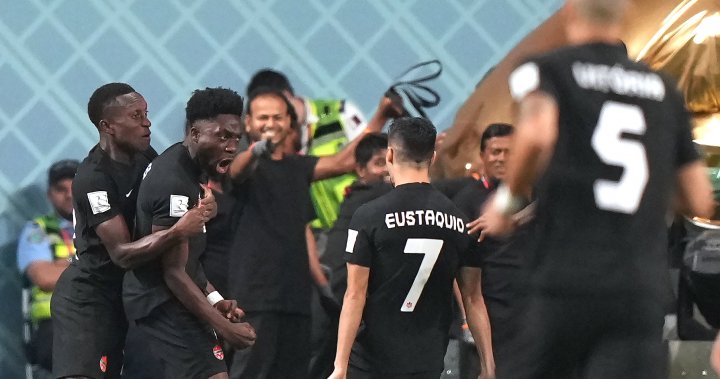 Canadian defender Alistair Johnston knew something good was coming when he saw Tajon Buchanan launch his cross into the Croatian penalty box.

“We have a saying – we like to call it a ‘goal ball,’” said Johnston, a CF Montreal fullback/wingback who can deliver a fine cross in his own right.

“As soon as it leaves your foot, as the guy who’s put in the cross, you just know that ball’s got goal written all over it. As soon as it left his foot, I said that in my head – goal ball. And Fonzie dunked on it.

“What a moment. You could just feel the energy. I think if you checked everyone’s GPS, that was probably the top speed, the max speed ever reached from every single one of the players, getting over to that corner flag (to celebrate with goal-scorer Alphonso Davies). It was just a feeling of ‘Ah, we’ve finally done it. We’ve finally scored at the world’s biggest stage and we do belong.’

“Of course we would have liked the rest of the night to go a little bit better, but it was a special moment than none of us will forget any time soon.”

Davies goal – Canada’s first ever at the men’s World Cup – was the high point of the evening for Canada on Sunday at Khalifa International Stadium. No. 12 Croatia, runner-up to France four years ago in Russia, rallied with two goals late in the first half and added two more after the break for a 4-1 win that ended Canada’s hopes of advancing to the knockout round at the 32-team tournament.

Buchanan’s cross curled away from goal and was met by Davies’ head as the Bayern Munich star soared high above Croatian defender Josip Juranovic, ending Canada’s 36-year wait for a goal after being blanked in three straight games in its only other trip to the men’s soccer showcase in 1986.

The goal came 27 years after Helen Stoumbos scored Canada’s first ever-goal at the Women’s World Cup in a 3-2 loss to England in June 1995.

5:39
How Canada’s World Cup appearance is growing soccer at home


The time of Davies’ score has been officially pegged at 68 seconds into Sundays match. Canada Soccer initially had it at 67 but FIFA says it came one second later.

Either way it ranks as the fastest goal in a group stage match at the World Cup since American Clint Dempsey scored after 29 seconds against Ghana in 2014. And it is the fastest goal to date at the tournament in Qatar.

It also removed Canada from the list of World Cup participants yet to score, leaving Congo (competing as Zaire), China, Indonesia (competing as Dutch East Indies) and Trinidad and Tobago stuck on zero.

Goalkeeper Milan Borjan started the play with a goal kick that found Cyle Larin at midfield. The Besiktas striker controlled the ball with his foot and sent it over to Buchanan, who surged forward, taking two touches before lifting his head and seeing Davies headed into the box like an Exocet missile.

“Not the outcome we wanted, but we’ll keep fighting for everyone,” Davies said in a social media post to his 5.1 million followers on Instagram and 489,600 on Twitter. “Happy to be able to score my first WC goal for the team and to be able to put my name in the history books. Couldn’t have done it without my brothers!”

Davies said Tuesday he was happy to put his name in the history books with a highlight-reel header against Croatia. But he says the Canadian men want something out of their final game – and to show they belong on the world stage.

The Bayern Munich star has his parents in Qatar and says his mother teared up a little bit when he scored.

The goal by Davies was his 13th for Canada – the first by header. Davies’ left foot accounted for 11 of his Canadian goals. A 12th came off his body.

Johnston believes Davies may use his head more often in the future.

“He’s the best athlete arguably in world football. He’s unbelievable.There’s no reason why he can’t be dominant (in the air). You saw what he did. He put that (Croatian defender) on a poster, unfortunately for him.

“Fonzie has that ability, And I think he’d like to add that to his repertoire. You put in crosses like that, it’s an invitation to go head the ball.”


Midfielder Ismael Kone, the only other Canadian player to speak to the media on Monday, wasn’t so sure.

The 41st-ranked Canadians, the second team to be eliminated from the tournament after host Qatar, wrap up play Thursday against No. 22 Morocco.

Having drawn kudos for its bright, energetic performance in a 1-0 loss to No. 2 Belgium and scored against Croatia, the Canadians are now looking to get a result against Morocco.

Losing at the World Cup is getting old. And having to wait another four years for a chance to get in the win column is no fun.

According to Opta, Canada is the third team to lose its first five World Cup matches, joining Mexico (which lost its first nine) and El Salvador (lost six).

Coach John Herdman, who riled Croatia with his fiery words to his team in the wake of the Belgium loss, apparently was more restrained when he gathered the players for a post-game huddle Sunday night.

“It was a little different that the post-match huddle against Belgium,” Johnston said with a smile. “There was no quotes that are going to go all over the world.”


The message was put the game behind you, learn from your mistakes and focus on Morocco.

“We’ve made a ton of people very proud back home and we need to continue to keep our head held high and play for them,” said Johnston. “Because that’s what this World Cup is about. It’s about showing your country in the best light to the rest of the world.”

There was more to celebrate Monday for the players as friends and family visited the Canadian training centre.

Denial of responsibility! Verve Times is an automatic aggregator of the all world’s media. In each content, the hyperlink to the primary source is specified. All trademarks belong to their rightful owners, all materials to their authors. If you are the owner of the content and do not want us to publish your materials, please contact us by email – [email protected]. The content will be deleted within 24 hours.
Alphonso DaviesCanadaCanada MoroccoCanada Morocco gameCanada Morocco timeCanada Morocco world cupCanada World CupFIFA
0
Share FacebookTwitterGoogle+ReddItWhatsAppPinterestEmail

Overwatch 2’s Season 2 is a battle for Olympus