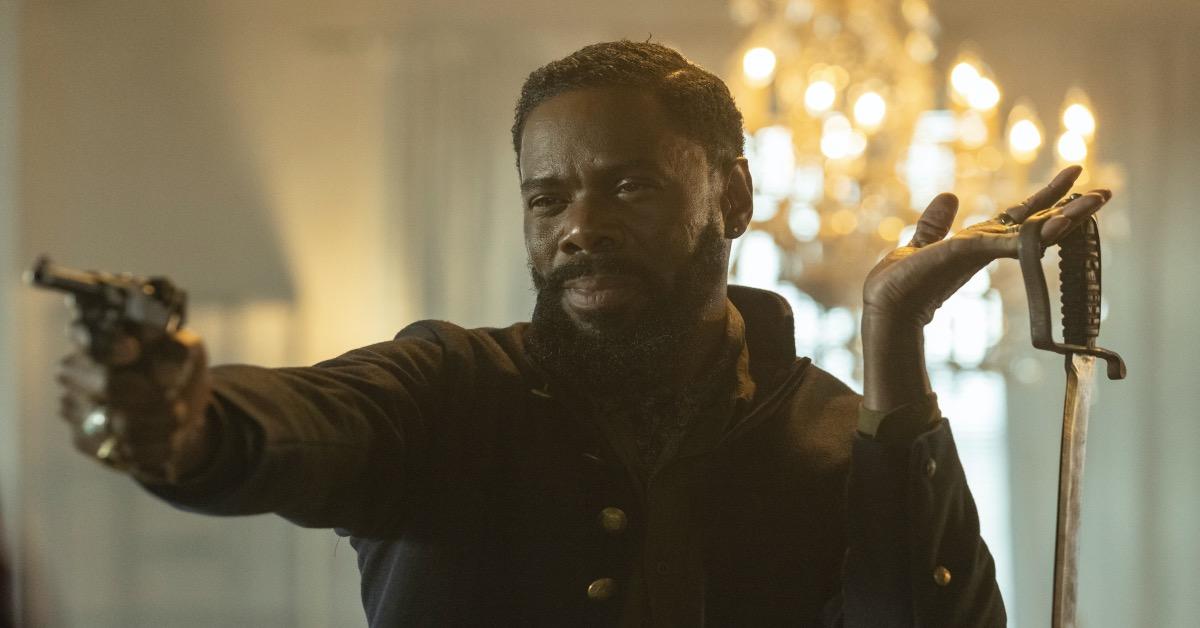 Warning: this story contains spoilers for Fear the Walking Dead Season 7 Episode 5, “Till Death.” There’s a new Negan to fear. When Sherry (Christine Evangelista) escaped the Saviors and Negan’s (Jeffrey Dean Morgan) Sanctuary on The Walking Dead, her husband Dwight (Austin Amelio) crossed the country — and shows — to find her. Reunited on Season 6 of Fear, Dwight and Sherry split over Negan PTSD: living under Pioneer leader Virginia’s (Colby Minifie) subjugation. After spending last season gunning for Virginia to exorcise her Negan demons, Sherry agreed to start over with Dwight for their new beginning.

But their beginning was the end for Teddy Maddox (John Glover), who turned Texas into ground zero of the nuclear-zombie apocalypse to end Season 6. In “The Beginning,” Dwight and Sherry sheltered in a storm cellar with the Larsons, saving the young family from Teddy’s acolytes.

Months later, Dwight and Sherry are the Dark Horses: now-legendary outlaws operating under a code of honor keeping people safe from assholes. Assholes like Victor Strand (Colman Domingo), the friend-turned-foe at war with Morgan Jones (Lennie James) from atop his Tower that survived the fallout.

Forcibly reunited with Strand in “Till Death,” the ex-Saviors are offered residency in The Tower if they recover Mickey (Aisha Tyler): a resident Strand says is fixated on a suicide mission searching for her husband and the fabled destination Padre. “We’re very particular about who we let in and out of our little sanctuary,” says Strand, who threw Will (Gus Halper) off its roof to start Season 7.

Dwight and Sherry notice the wall of walker pictures Strand claims is there to identify The Tower group’s missing loved ones, recalling how the Saviors collected Polaroids of Negan’s victims on The Walking Dead. “You know, we lived in a place like this before. And that didn’t turn out so hot,” Sherry tells Strand. “And the fact that you’re even calling this a sanctuary makes me pretty damn sure that it’s anything but.”

Dwight wants to cut a deal to secure a place in Strand’s Tower for Kevin (Aaron Spivey-Sorrells), Kim (Julia Barnett), and their daughter Briga (Ella McCain). Sherry wants to find Mickey, help her find her husband, and they all find Padre together. But the former wrestling star refuses to return, revealing the real reason Strand wants her back: Mickey is the only one to escape The Tower surrounded by Strand’s zombie moat. He’ll do anything to make sure no one else finds out how.

The trio returns to the storm cellar to find the Larson family dead — murdered by hired gun Eli (Alex Skuby), out for revenge after running afoul of the Dark Horses earlier in the episode. Caught with Polaroid pictures, Eli claims Strand put out a hit on the Larsons in exchange for a place in The Tower.

Another reveal: Dwight only considered returning Mickey to The Tower to secure somewhere safe to start a family with Sherry. Strand ordered the Larsons killed to “make us doubt ourselves, make us doubt our code,” Dwight tells Sherry. “Make us think his way is the only way, but it’s not. I’d rather die fighting with you than live hiding with him.”

“I think it’s the moment when Dwight sees those Polaroids with Eli, and he realizes that taking any kind of deal with Strand is tantamount to throwing in with Negan at the Sanctuary,” co-showrunner Ian Goldberg explained on Fear the Walking Dead Episode Insider. “It is just a new iteration of that, and he will not let himself go there again.”

Daryl (Norman Reedus) exiled Dwight from Virginia after Rick Grimes (Andrew Lincoln) captured Negan to end the Savior War in The Walking Dead‘s Season 8, spurring Dwight’s cross-country search for Sherry after she escaped the Sanctuary and disappeared during Season 7.

“There’s just a lot of mistrust that plays on Dwight’s own trauma from his past, what happened with Negan, and he’s rightfully suspicious of Strand’s motives,” Goldberg said. “There is Strand looking to hunt down someone who escaped The Tower and saying that he has her best interests at heart. Seeing what Strand does to the Larsons speaks volumes about what Strand is willing to do to get what he wants.”

The showrunner added of the Vic-tatorship: “This harkens back to the Strand that we saw throw Will off the roof in ‘The Beacon.’ This Victor Strand is not above doing some very morally gray actions to preserve what he’s built and to hold on to who he’s become.”

Follow the author @CameronBonomolo on Twitter for all things TWD and stay tuned to ComicBook for coverage all season long. New episodes of Fear the Walking Dead Season 7 premiere Sundays at 9/8c on AMC.

Denial of responsibility! Verve Times is an automatic aggregator of the all world’s media. In each content, the hyperlink to the primary source is specified. All trademarks belong to their rightful owners, all materials to their authors. If you are the owner of the content and do not want us to publish your materials, please contact us by email – admin@vervetimes.com. The content will be deleted within 24 hours.
Colman DomingoFear the Walking DeadJeffrey Dean MorganNegan (Walking Dead)The Walking DeadVictor Strand
0
Share FacebookTwitterGoogle+ReddItWhatsAppPinterestEmail