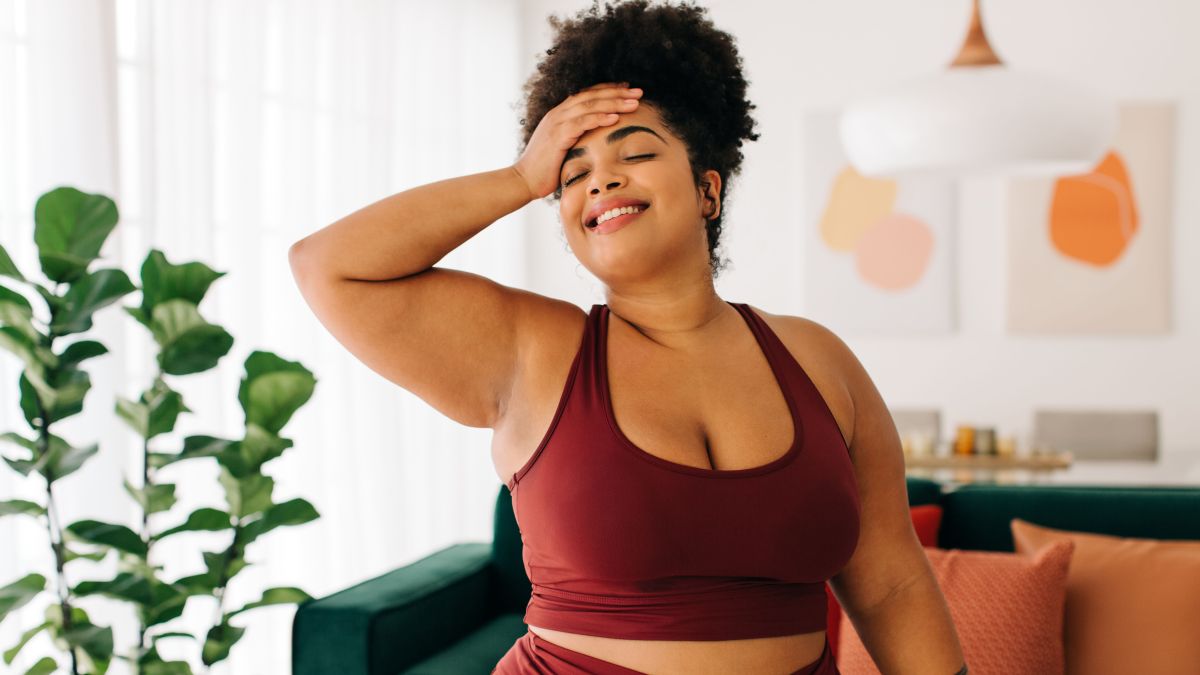 Exercise on period: How the menstrual cycles affect energy levels

Do you exercise on your period? Or are you wondering whether it’s safe to workout during your time of the month?

No matter what stage you are in of your menstrual cycle, once you’re kitted out in some workout essentials, like one of the best sports bras for running (opens in new tab) – if you feel up to it – there’s nothing to stop you from exercising, even if you are on your period.

But don’t just take our word for it. Science has proven that exercising on your period is safe to do. In fact it could prove to be very beneficial. However you might experience a number of different physical and psychological symptoms, such as feeling your energy levels are lower.

To discover everything there is to know about exercise on periods, we turned to the science and asked an expert to weigh in on the topic.

How does your period affect energy levels?

Your period can affect your energy levels in a couple of ways.

Firstly, if you experience heavy bleeding and lose more than 80 milliliters of blood during one menstrual period, it can lead to iron deficiency. Iron helps our body make red blood cells. But if our body doesn’t have enough iron, it can’t produce enough red blood cells which can lead to anemia (opens in new tab). According to the Institute of Quality and Efficiency in Health Care (opens in new tab), a lack of red blood cells in our blood means our bodies get less oxygen which in turn makes us feel ‘weak and tired’.

Secondly, changing hormone levels have a big part to play in our energy levels.

Tamara Hew-Butler, who is Associate Professor of Exercise Physiology at Wayne State University (opens in new tab), explains that women and those who menstruate tend to have lower energy levels during the second half of the of the menstrual cycle, known as the luteal phase which occurs during days 15 to 28. But why is this?

Tamara Hew-Butler is a podiatric physician and associate professor of Exercise and Sports Science at Wayne State University in Detroit, Michigan. She obtained her BS in Kinesiology at the University of California at Los Angeles, CA; Doctor of Podiatric Medicine (DPM) at Temple University in Philadelphia, PA; and Philosophy Doctor (PhD) at the University of Cape Town, South Africa. She is a Fellow of the American College of Sports Medicine (FACSM) and specializes in both sports medicine and exercise physiology.

“Physiologically speaking, the first two weeks of the menstrual cycle – the follicular phase – is characterized by low levels of the two main female sex hormones, estrogen and progesterone,” Hew-Butler says.

“Research (opens in new tab) suggests that the perception of low energy during the second half of the menstrual cycle mostly results from negative moods. I.e., irritability, anger and fatigue which increase the perception of fatigue.”

How does your period affect sporting performance?

There’s a desperate need for more research that examines how menstrual cycles impact sporting performance. However, there are a few questionnaire-based studies that shed light on how periods typically affect people who exercise. Here’s what we found:

1. It could affect endurance and strength

Many people believe their period can affect sporting performance. Specifically, people who menstruate believe it affects their strength and endurance.

2.  It can heighten physical and psychological distress

Of note, 93% reported menstrual cycle-related symptoms with 33% per cent perceived heavy menstrual bleeding and 67% considered these symptoms impaired their performances.

These symptoms are likely to have a negative impact on performance, so don’t be surprised if you find it harder to achieve your usual run time or lift the same weights when you’re on your period.

3.  It can leave you feeling tired

Another way your period may negatively affect sporting performance is through the development of iron deficiency and anemia due to heavy menstrual bleeding.

One study, published in PLOS One (opens in new tab), found that heavy bleeding is very common in elite athletes, with 37% of those included in the study reporting the symptom. This was also associated with self-reported anemia in the athletes – a condition linked with fatigue. And you’re unlikely to hit your personal best when you’re feeling tired.

4.  It affects everyone differently

While it’s likely that periods affect sporting performance, every woman and person who menstruates will experience this differently.

Research in the International Journal of Environmental Research and Public Health (opens in new tab) reviewed studies investigating the effects of the menstrual cycle phase and found: “Studies examining objective performance (using anaerobic, aerobic or strength-related tests) do not report clear, consistent effects of the impact of menstrual cycle phase on physical performance. Overall sport performance can be influenced by both perceived and physical factors.”

Which is why, Hew-Butler states: “Although scientists make broad generalizations from the (very limited) scientific findings available, every female is their own experiment and must investigate what works – and does not work – during both training and competition.”

Is it good to exercise on your period?

According to Hew-Butler, it is neither good nor bad to exercise during your period and is largely an individual decision, based upon your symptoms and comfort level.

“Exercising while menstruating is not physiologically harmful,” Hew-Butler tells us.

Cheveley Park Stakes: Meditate back out to bag Group One victory at Newmarket for Aidan O’Brien | Racing News