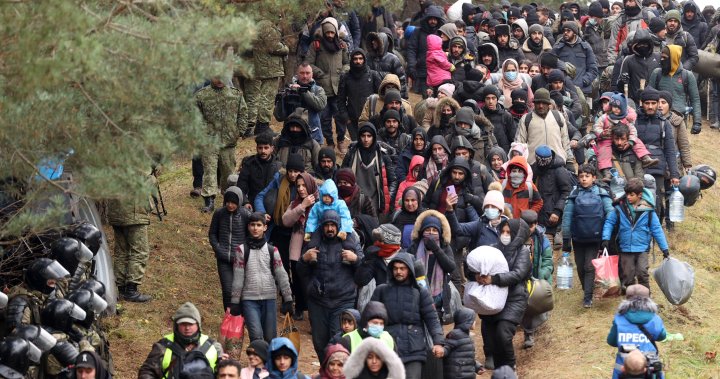 The European Union will step up sanctions against Belarus, which on Monday denounced as “absurd” Western accusations that it was driving a migrant crisis that has left up to 4,000 people stranded in freezing forests on its border with Poland.

EU foreign ministers are meeting in Brussels to agree on further measures pressuring Belarus, where veteran leader Alexander Lukashenko cracked down on protesters challenging as fraudulent a presidential vote in which he had claimed victory.

The 27-nation EU slapped sanctions on Minsk for violating human rights. Less than a year after the August 2020 election, migrants from Iraq, Afghanistan, Congo and Cameroon started appearing on Belarus’ land borders with the EU, trying to cross into member states Lithuania, Latvia and Poland.

“What we see in Minsk, this inhumane system of using refugees as tools to exert pressure on the European Union, has not improved but has got worse over the last days,” Germany’s EU Minister Haiko Maas said on arriving to talks with his peers.

“We will toughen sanctions on individuals who are involved in this human trafficking, and we will have to talk about the fact that severe economic sanctions are inevitable … We will have to tackle the airlines, too.”

Migrants from the Middle East and Africa had not previously used this migration route to the wealthy European bloc.

Polish border guards have reported 5,100 attempted irregular crossings from Belarus so far in November, compared to 120 in all of 2020. Comparative numbers also spiked in the two Baltic states.

“Today we are going to approve a new package of sanctions,” said the EU’s top diplomat, Josep Borrell, adding they will target airlines and travel agencies involved in “this illegal push of migrants.”

The Belarusian foreign ministry replied by dismissing as “absurd” accusations that Minsk had engineered the migrant crisis on its borders with the European Union, according to Russian state news agency RIA.

Lukashenko said Belarus was trying to convince migrants to go back home. “But nobody wants to go back,” he said, according to Belarus’ state news agency Belta. Minsk would retaliate against any new EU sanctions, he was quoted as saying.

Maas called on Lukashenko’s most powerful ally, Russian President Vladimir Putin, to put pressure on Minsk to stop risking people’s lives in a tug-of-war with the EU.

At least eight people have died along the 200-kilometer-long land border between Poland and Belarus, including from cold and exhaustion.

The sparsely populated area of lakes, swamps and forests is becoming even more hostile to people trying to keep themselves warm around bonfires through the cold November nights.

Maas and Borrell urged Warsaw to allow humanitarian aid on the frontier, where Poland has erected a barbed wire fence and deployed some 20,000 police, border guards and soldiers.

The Kremlin said it was ready to mediate between Belarus and the EU, that Putin would talk to Lukashenko, and that Moscow had no plans to reroute gas flows away from Belarus despite Minsk threatening to cut transit to Europe through the Yamal pipeline.

EU members Lithuania, Latvia and Estonia have warned of a risk of military conflict and their presidents will discuss the matter on Monday with Poland’s Andrzej Duda.

Travel agencies in the Middle East working in partnership with tour operators in Belarus provided tourist visas to thousands of people in recent months, a Reuters investigation revealed.

Read more:
What’s behind the migrant crisis at the Belarus-Poland border, and what happens next?

The EU would target airlines that are flying migrants from the Middle East to Minsk in order to take them to the border, the bloc’s chief executive said. Maas stressed Turkish Airlines has stayed away.

Denial of responsibility! Verve Times is an automatic aggregator of the all world’s media. In each content, the hyperlink to the primary source is specified. All trademarks belong to their rightful owners, all materials to their authors. If you are the owner of the content and do not want us to publish your materials, please contact us by email – admin@vervetimes.com. The content will be deleted within 24 hours.
Alexander LukashenkoBelarusBelarus Alexander LukashenkoBelarus Migrantsbelarus poland borderBelarus refugeesEU Belarus sanctionsis belarus part of the eu
0
Share FacebookTwitterGoogle+ReddItWhatsAppPinterestEmail

October retail sales are expected to be strong, showing economy is back on track

There Will Be No More Night review – chilling meditation on…

“Who gives a damn about excuses?”

Equations built giants like Google. Who’ll find the next…