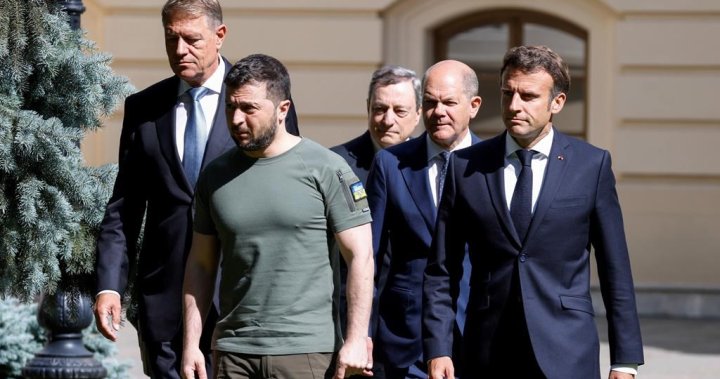 The European Union’s executive arm on Friday recommended making Ukraine a candidate for EU membership, a first step on what was expected to be a long road for the war-torn country to join the 27-nation bloc.

The European Commission delivered its proposal to award Ukraine candidate status after a fast-tracked analysis of answers to a questionnaire. The Ukrainian government applied for EU membership less than a week after Russia invaded the country.

“Ukrainians are ready to die for the European perspective,” commission President Ursula von der Leyen said. “We want them to live with us, the European dream.”

The leaders of the bloc’s existing members are scheduled to discuss the recommendation during a summit next week in Brussels. The European Commission’s endorsement, while a strong sign of solidarity with Ukraine, is likely to take years or even decades to materialize into EU membership.

Launching accession talks with a potential member requires unanimous approval from all member nations. They have expressed differing views on how quickly to add Ukraine to their ranks.

But Ukraine’s bid received a shot in the arm Thursday when the leaders of France, Germany, Italy and Romania visited the country and vowed to back Kyiv in becoming an official candidate.

To be admitted, potential newcomers need to demonstrate that they meet EU standards on issues such as fighting corruption and democratic principles and must absorb about 80,000 pages of rules covering everything from trade and immigration to fertilizer and the rule of law.

“Yes, Ukraine deserves a European perspective. It should be welcomed as a candidate country, on the understanding that important work remains to be done,” von der Leyen said Friday. “The entire process is merits-based. It goes by the book and therefore, progress depends entirely on Ukraine.”

Denial of responsibility! Verve Times is an automatic aggregator of the all world’s media. In each content, the hyperlink to the primary source is specified. All trademarks belong to their rightful owners, all materials to their authors. If you are the owner of the content and do not want us to publish your materials, please contact us by email – [email protected]. The content will be deleted within 24 hours.
EUEU bloceu commissionEU UkraineEuropean Comisssioneuropean unionEuropean Union ukrainePolitics
0
Share FacebookTwitterGoogle+ReddItWhatsAppPinterestEmail