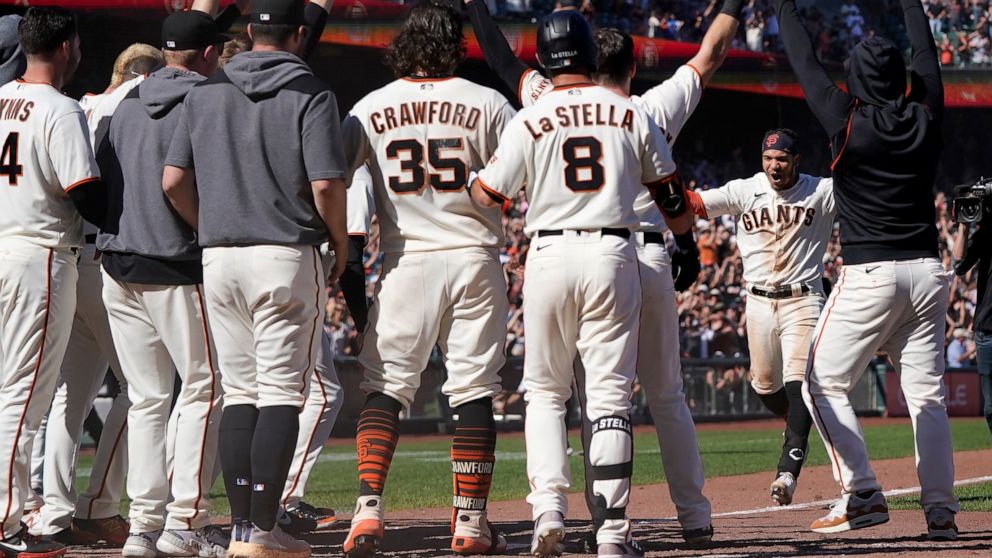 SAN FRANCISCO — Thairo Estrada hit a two-run homer with one out in the ninth inning and the San Francisco Giants edged the Pittsburgh Pirates 8-7 in a back-and-forth game Sunday.

Evan Longoria, whose wild throw gave Pittsburgh the go-ahead run in the top of the ninth, started the rally in the bottom half with a leadoff single against Wil Crowe (4-7).

After pinch-runner J.D. Davis was forced out at second on a grounder by Mike Yastrzemski, Estrada cleared the wall in left-center for his 11th homer.

Bryan Reynolds homered, doubled and drove in five runs for the Pirates, who lost their their fourth in a row. They went 2-8 on a road trip that covered nearly 6,000 miles from Baltimore to Arizona to San Francisco.

Camilo Doval (4-5) pitched the ninth for the victory working for a third straight day.

It was 6-all in the Pirates ninth when they put runners at first and second with one out. Rodolfo Castro hit a slow roller toward third base for an infield single and Longoria’s throw sailed over first baseman Wilmer Flores.

Ben Gamel tried to score from first base, too, on the overthrow and was thrown out at the plate. The Pirates challenged the call, which was upheld.

LaMonte Wade Jr. hit a three-run homer in the second to put the Giants ahead 4-0.

Reynolds had a two-run double in the fifth as Pittsburgh scored three times to close within 5-3. Reyonds, who had three hits, had a three-run homer in the seventh that put the Pirates ahead 6-5.

Brandon Crawford hit a tying double in the Giants seventh.

Pirates: 3B Ke’Bryan Hayes missed his third straight game with back spasms.

Giants: C Joey Bart played for the first time since last Monday after dealing with a sprained right ankle. … LF Joc Pederson left the game with a bruised right hand after being hit by a pitch in the fourth.

Pirates: Following an off day, RHP Mitch Keller (4-8, 4.25) takes the mound at home against Boston on Tuesday night to began a nine-game homestand. Keller is seeking to win back-to-back starts for the first time this season.

Denial of responsibility! Verve Times is an automatic aggregator of the all world’s media. In each content, the hyperlink to the primary source is specified. All trademarks belong to their rightful owners, all materials to their authors. If you are the owner of the content and do not want us to publish your materials, please contact us by email – [email protected]. The content will be deleted within 24 hours.
Alex CobbAthlete healthAthlete injuriesBaseballBrandon BeltBrandon CrawEvan LongoriaJ.D. Davis
0
Share FacebookTwitterGoogle+ReddItWhatsAppPinterestEmail