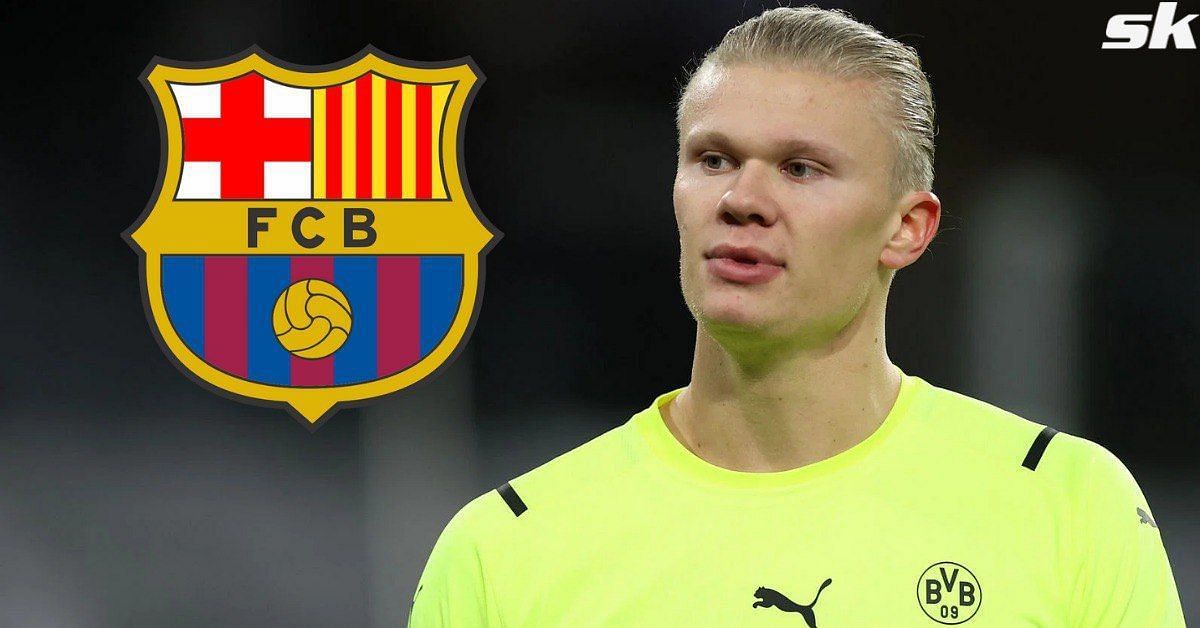 Barcelona president Joan Laporta is reportedly determined to bring Erling Haaland to Camp Nou and is already making inroads with his agent Mino Raiola. Laporta allegedly held talks with Haaland’s super-agent Raiola in Italy and is considering making the striker Barcelona’s marquee signing in the summer.

26-time La Liga winners, Barcelona, are in dire need of inspiration at the moment. The Blaugrana have crashed out of the Champions League for the first time in 17 years and currently sit in eighth place in La Liga. Bringing a player of Erling Haaland’s caliber would not only add much-needed firepower to Barcelona’s arsenal but also give them a morale boost.

However, bringing a player of Haaland’s stature to Camp Nou is easier said than done at this point. Barcelona are in a bit of a mess financially and will need to sell a few players to meet Haaland’s €75million release clause next summer. Although difficult, Barcelona are fancying their chances of pulling it off, and Laporta is reportedly using his good relationship with Raiola to sweeten the deal.

Raiola to @Sport1: “Erling Haaland will take the next step. Bayern, Real, Barcelona, Man City – these are the big clubs he can join. Man City won the PL five times, significantly more than Man United. When we moved to BVB, we all knew that this step would come”. ???? #Haaland

Raiola to @Sport1: “Erling Haaland will take the next step. Bayern, Real, Barcelona, Man City – these are the big clubs he can join. Man City won the PL five times, significantly more than Man United. When we moved to BVB, we all knew that this step would come”. ???? #Haaland https://t.co/favWzbr9LL

As per Mundo Deportivo, Raiola has notified Barcelona of Haaland’s salary expectations and other commissions. And while we are yet to learn about the actual figures, Barcelona have already started working on making Laporta’s dream signing a reality.

Except for Ansu Fati, Pedri, Nico Gonzalez, and Gavi, no Barcelona player is untouchable at the moment. Barcelona manager Xavi is determined to bring Barcelona’s glory days back and is not afraid of shuffling the pack to get the results.

Apart from Barcelona, Manchester City, Bayern Munich, and Real Madrid are also keeping a close eye on Haaland’s whereabouts. A summer switch to one of these four clubs is looking more likely than ever.

Veteran right-back Dani Alves made his second debut for Barcelona in a friendly against Boca Juniors in the UAE on Tuesday. In the memorial match for Diego Maradona, Alves put in an impressive shift, despite not playing a match in over four months.

The world’s most decorated footballer is currently not a part of the Barcelona roster for the season, making him ineligible for competitive matches. He will be able to take part in La Liga, Europa League, and the Copa del Rey following his registration in January.

Denial of responsibility! Verve Times is an automatic aggregator of the all world’s media. In each content, the hyperlink to the primary source is specified. All trademarks belong to their rightful owners, all materials to their authors. If you are the owner of the content and do not want us to publish your materials, please contact us by email – [email protected]. The content will be deleted within 24 hours.
BarcelonaErling HaalandFootballNews
0
Share FacebookTwitterGoogle+ReddItWhatsAppPinterestEmail