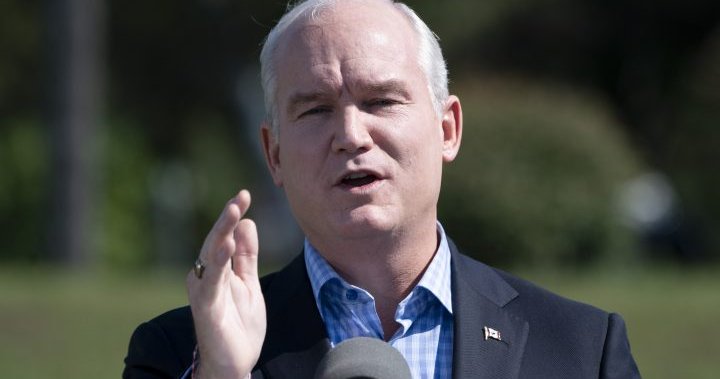 Conservative Leader Erin O’Toole has removed a Saskatchewan senator from the party a day after she launched a petition to force him to face a leadership review.

In a statement Tuesday, O’Toole said Sen. Denise Batters had been removed from the Conservative national caucus.

“As the Leader of the Conservative Party of Canada, I will not tolerate an individual discrediting and showing a clear lack of respect towards the efforts of the entire Conservative caucus, who are holding the corrupt and disastrous Trudeau government to account,” O’Toole said.

On Monday, Batters launched the petition calling for a leadership review within six months, specifically pointing to O’Toole’s loss of the 2021 federal election and his party policy reversals during the campaign.

Batters said the petition is needed because O’Toole “reversed core policies” without input from either party members or caucus, and proceeded to lose the election.

He reversed core policies without input from members & caucus, then lost #Elxn44 by every measure.

Our members deserve to have a say!
Sign at: https://t.co/u20cvWmiJ6
VIDEO: pic.twitter.com/GLPyfC0X3w

The news came as a surprise to Batters, herself, who said Tuesday afternoon that nobody from O’Toole’s office had contacted her about her petition.

“You’d think if such a significant step were to be taken that it would be incumbent on them to let me know,” Batters, who referred to herself as a “team player at heart,” said in an interview.

“(But) no one, either Mr. O’Toole or member of his staff or team have contacted me personally at all. And I have not heard that from anyone like that.”

Batters pointed to post-election statements by Sen. Michael MacDonald, who in a letter obtained by the Globe and Mail urged MPs to vote in favour of a “necessary” review of O’Toole’s leadership.

But a Conservative source told Global News Tuesday evening that Batters went beyond simply suggesting O’Toole face a referendum on his leadership.

“She said we have no chance of winning the next election – and if she feels that way, she shouldn’t be part of the team,” the source, who agreed to speak about internal party affairs on the condition they not be named, said.

“Caucus is over the division. They want to move on. It’s time to get on board or get out.”

That’s enough to force out any MP insufficiently united behind O’Toole’s leadership – and it’s likely to be seen as a threat by caucus rabble rousers who want a change in management.

It’s also the first indication of the actual numbers behind the caucus division that has plagued O’Toole since September’s election loss. If O’Toole’s team can count on the support of roughly 70 MPs, it may suggest they’re less certain of how the remaining 48 would vote.

Both storylines will come to a head on Wednesday, when O’Toole convenes a caucus meeting ahead of next week’s return of Parliament.

Denial of responsibility! Verve Times is an automatic aggregator of the all world’s media. In each content, the hyperlink to the primary source is specified. All trademarks belong to their rightful owners, all materials to their authors. If you are the owner of the content and do not want us to publish your materials, please contact us by email – admin@vervetimes.com. The content will be deleted within 24 hours.
CanadaCanada election 2021Conservativeconservative leadership petitionConservative PartyDenise BattersErin O'TooleNews
0
Share FacebookTwitterGoogle+ReddItWhatsAppPinterestEmail

Congress to edge past BJP in a close contest