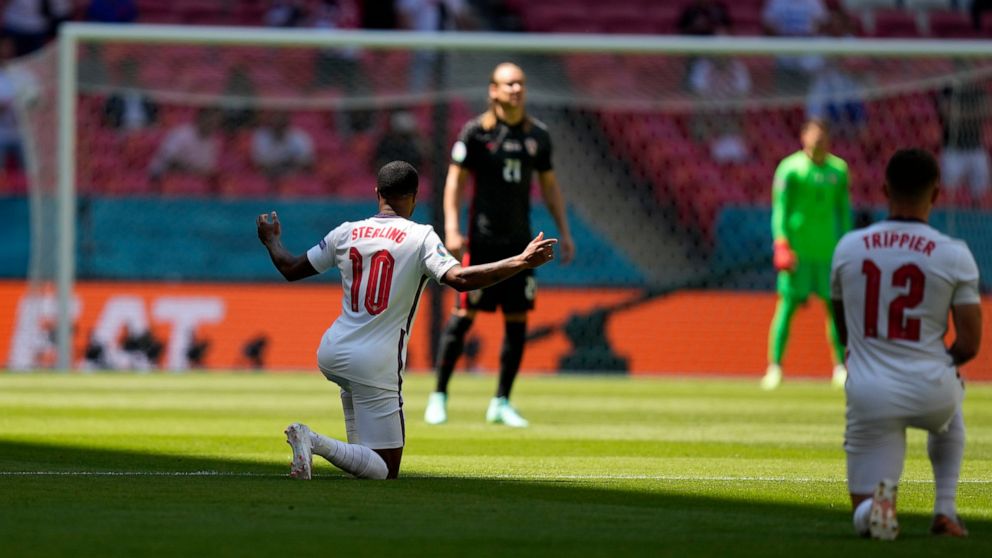 LONDON — Sections of fans at Wembley Stadium booed England players for taking a knee before the European Championship game against Croatia on Sunday.

The boos, which could be heard over those fans applauding, came despite pleas from the team to respect the anti-racism gesture. Croatia’s players did not take a knee as expected.

“Everybody should cheer for England,” British Prime Minister Boris Johnson said a short time later the G7 Summit, while not saying if he would take a knee if he was a player.

Some England fans claim taking a knee is a political act but the English Football Association said again ahead of the team’s opening Euro 2020 match that the gesture is important to them and should be respected.

“They are doing this as a mechanism of peacefully protesting against discrimination, injustice and inequality,” the FA said in a statement to fans. “This is personally important to the players and the values the team collectively represents. This gesture of unity and fighting against inequality can be traced back as far as the 18th century.

The jeering was by some fans who also chanted “No surrender” during the national anthem. That’s a dated reference to the conflict endured for generations that saw Britain hit by terrorist attacks from the Irish Republic Army.

Croatia’s national anthem was also booed by some of the 22,500 fans allowed into Wembley, which could lead to the country’s soccer association being fined by UEFA.

Denial of responsibility! Verve Times is an automatic aggregator of the all world’s media. In each content, the hyperlink to the primary source is specified. All trademarks belong to their rightful owners, all materials to their authors. If you are the owner of the content and do not want us to publish your materials, please contact us by email – [email protected]. The content will be deleted within 24 hours.
2020 UEFA European Football ChampionshipsCroatiaEastern EuropeenglandeuropeGeneral newsInternational soccerMen's soccer
0
Share FacebookTwitterGoogle+ReddItWhatsAppPinterestEmail