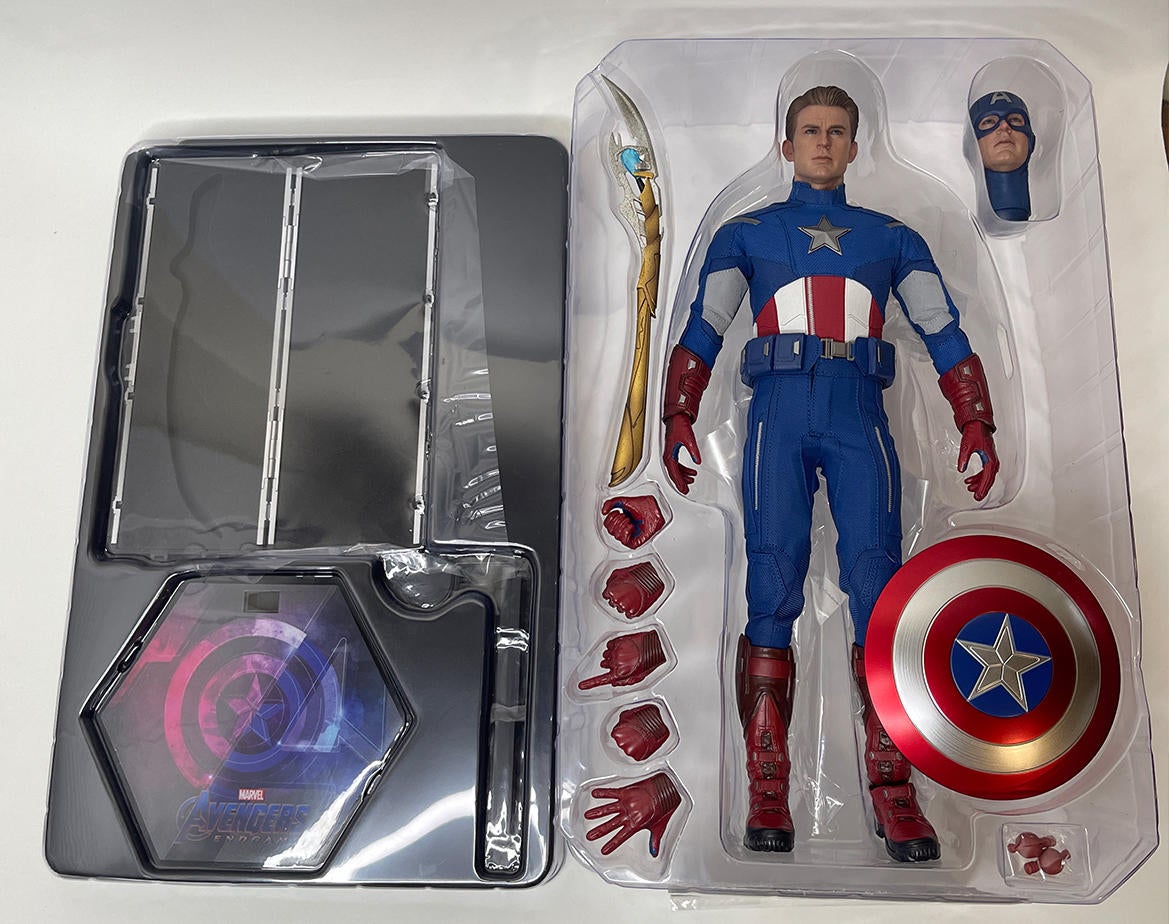 Marvel Studios figures by Hot Toys seem to be rolling out by the dozen. With Disney+ shows adding new costumes for existing characters, introducing variant versions of familiar faces, and introducing new heroes all together, there is no shortage of high-end collectibles for Marvel fans. Prior to 2021’s onslaught of Marvel Cinematic Universe content and characters, 2019 offered Avengers: Endgame which saw varying version of characters appearing as time travel came into play. Now, Sideshow is gearing up to launch a Hot Toys sixth scale figure which brings the 2012 version of Captain America into collections, revisiting the popular star-spangled costume the character wore in The Avengers.

Sideshow provided ComicBook.com with an advanced sample of what is officially billed as Captain America (2012 Version). We got a look at the package, the figure, and all of the accessories that come along with it. First impression is that this is the perfect way to start or continue a collection of 2012 Avengers figures without having to pay an aftermarket price for a used edition of the now hard-to-find figure. While it’s not the exact same figure as the Hot Toys collectible that released in the Avengers line, it does come with some great accessories and a similar look.

First things first: the packaging. The Captain America (2012 Version) comes in the same sleek Avengers: Endgame sleeve with character art and the Avengers logo blended together as other Endgame figures. Together with other Endgame boxes, the sleeve looks great and has holographic Captain America and Avengers logos on its sides (get a look at those in the video above). The sleeve slides off for those who want to keep their 2012 Cap figure in the box to unveil a clear plastic barrier which allows for a clear view of the figure and its accessories. See it all below!

Taking the figure out and getting its protective wrapping up, the colors of the costume pop nicely. The standard costume from Avengers: Endgame offers up one of the most memorable moments in MCU history in sixth scale form (check it out here) but this 2012 Cap has colors which pop out and catch eyes more quickly on a shelf. The red, white, and blue are just bright enough to accurately represent the look in the film but also shine nicely on a shelf.

The figure is packaged with the Captain America shield, its other accessories, and sitting above a second level of plastic containing its base stand and a carrying case for the Loki’s scepter accessory. Check it out below!

The accessories are where this figure catches a huge win. Loki’s scepter looks brilliant, calling any MCU fan’s mind immediately back to the tool that was used throughout the franchise’s first ensemble film. Five alternate hand options, the carrying case, and a shield which actually buckles onto Cap’s arm make for a satisfying amount of customization options.

The figure articulates well, offering pose options through the shoulders, elbows, wrists (spinning, not bending), hips, knees, and ankles. The ankles can offer a gap between the heel of the foot and the rest of the leg if leaned too far forward. It’s a minor flaw which can be covered up by sliding the detached upper portion of Cap’s red boot down but really results in trying to keep the figure from bending the ankles in a way that it looks like an achilles tendon is completely missing. Overall, it poses well and the alternate hands make for great options like recreating the moment when Cap made commands for the Avengers and NYPD.

Check out the figure and its accessories. They can be seen in the photos below!

The costume on this Cap looks great. It doesn’t have all the bells and whistles that some figures come with like actually functioning zippers but they don’t seem necessary on this one. The textures of the suit allow for rigid light reflection and an authentic feel. Unsurprisingly, it is a tremendously designed suit that accurately represents the suit 2012 Cap wore in Endgame.

Fittingly, the figure comes with two different heads. One sees the face of Steve Rogers (Chris Evans) in a brilliantly sculpted form. The other sees Cap with his helmet on. You’ll need to buy two figures if you want to have them throw down the way they did when 2012 Cap thought he was looking at Loki rather than his future self. The sculpts are attached to neck pieces which pop into place between the figure’s shoulders so they can rotate to the left and right but offer very limited bending for forward or back.

Overall, the figure offers a really authentic and fun take of the 2012 version of Captain America. The ability to have it be a present-day version of the character wearing the older Cap suit or a 2012 version of the character that fits rights into a line up of original Avengers heroes is a huge bonus. Topped with the Loki’s scepter accessory and the carrying case which it actually fits into, the $259 price tag makes this one a really great value for a classic Avenger. The detail is all there, the posing is good, and the accessories are a home run. You can get a closer look at the figure and my first reactions as I unboxed the figure in the video above.

Want to talk more about this figure? Hit me up on Instagram or head over to Sideshow’s official landing page for it!

Denial of responsibility! Verve Times is an automatic aggregator of the all world’s media. In each content, the hyperlink to the primary source is specified. All trademarks belong to their rightful owners, all materials to their authors. If you are the owner of the content and do not want us to publish your materials, please contact us by email – admin@vervetimes.com. The content will be deleted within 24 hours.
chris evansMarvel
0
Share FacebookTwitterGoogle+ReddItWhatsAppPinterestEmail

Brooks Koepka wins ‘The Match’ with rout over Bryson DeChambeau