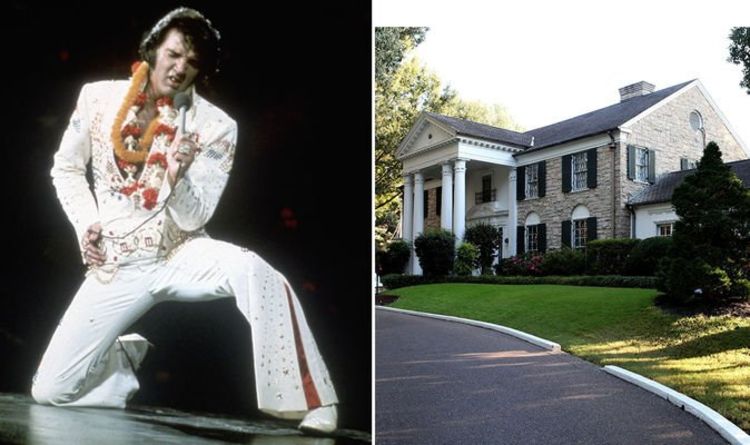 Five years after Elvis Presley’s death, Graceland was opened to the public for tours. But from 1982 until her death in 1993, The King’s Aunt Delta continued to live at the Memphis mansion and use a bedroom next to the kitchen while guests were looking around. Express.co.uk recently took part in a virtual live tour of Graceland, which included a look inside a number of unseen downstairs rooms including this space she would use in the daytime.

During the 1980s, Graceland’s kitchen was also not part of the tour, so that Aunt Delta could use it and the bedroom next to it.

Our tour guide, on-site archivist Angie Marchese, said on the live stream: “We call it Delta’s bedroom because this is a room she would use a lot during the day when we opened up for tours and then she would use the other room at night.”

The other room is the master bedroom that’s seen early on in the in-person tour. Prior to Delta, it was used by Elvis’ mother Gladys until her death in 1958 and then The King’s grandmother Minnie Mae until she died in 1980.

Entering the bedroom Delta used in the day, Angie pointed out its simple design and the TV and cable box from the early 1990s still intact.

On the chest of drawers was a framed picture of Elvis’ ex-wife Priscilla, his daughter Lisa Marie and Priscilla’s son Navarone Garibaldi.

Interestingly the drapes were a royal blue, having been put up in the late 1970s, while the carpet had been replaced shortly before Delta’s death in 1993.

Angie pointed out how one of the drawers contains the china that Lisa Marie uses for meals when she and her family visit Graceland.

The archivist herself knew Delta for the last four years of her life and described how at the end of the touring day. the guides would signal to her that she could come out and use the rest of the mansion in the evening.

After this, Delta would know that she had free run of the house and used it as she would in Elvis’ lifetime.

Angie added: “She would often change stuff on the dining room table.

“So you would come in one day and the placemats would be blue, the next day they could be red.

“You didn’t know what colour the dining room table was going to be decorated.”

Angie added: “Edmund her Pomeranian sometimes would run out in the Jungle Room in the middle of the day.

“And then you’d hear her yell at him to get back into the kitchen. So it was always a lot of fun when Delta was around.”

The Elvis expert also pointed out how near the kitchen in one of the cupboards was a Southfork Ranch mug The King’s Aunt used.

Angie reckons this was gifted to her by Priscilla who was starring in the TV show Dallas which featured the ranch.

Breast implants associated with a rare form of cancer