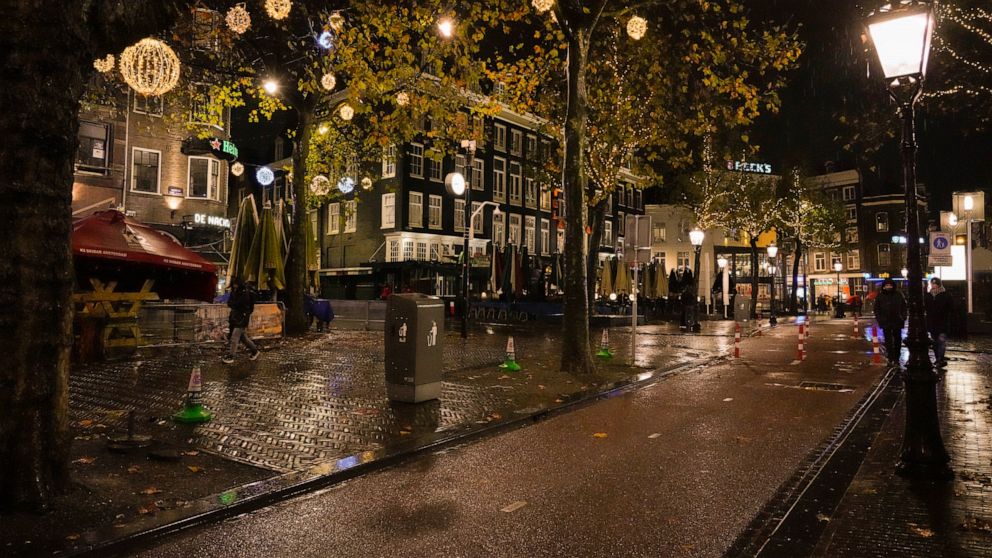 The Netherlands has moved into a tougher lockdown that was announced amid spiking infection rates even before the country recorded its first confirmed cases of the new, more highly transmissible omicron variant

AMSTERDAM — The Netherlands moved into a tougher lockdown Sunday that was announced amid spiking infections even before the country recorded its first confirmed cases of the new, more highly transmissible omicron virus variant.

Bars, restaurants, nonessential stores, cinemas and theaters were among the public places forced to shut from 5 p.m. until 5 a.m. under the new lockdown.

Wilko Klippens, who runs the Biessels cafe on the Grote Markt square in the city of Nijmegen, said the latest lockdown will further eat into his savings.

The restrictions took effect hours after Health Minister Hugo de Jonge announced that at least 13 travelers who arrived at Amsterdam’s Schiphol Airport on Friday tested positive for the new variant. He urged other travelers who arrived last week from southern Africa to get tested as well.

“We have appealed to everyone … who has been in southern Africa in the past week to report to the local health authority … to make a separate test appointment,” he said.

The Netherlands has seen a string of record daily infections in recent weeks and an earlier partial lockdown appears to have had little effect. Dutch hospitals have warned that intensive care units could become overwhelmed by the end of the week. The Dutch government has mandated that all nonessential surgeries, such as hip replacements, be postponed to free up ICU beds for COVID-19 patients.

De Jonge said he could not rule out imposing more restrictions leading up to Christmas.

Wilma van Kampen said she would adhere to the lockdown and hoped that the situation does not deteriorate.

“I’m a nurse. I know how sick people get. I see a lot of people suffering from COVID,” she said.

Earlier Sunday, a heavy police presence massed in the eastern city of Nijmegen ahead of a banned protest against coronavirus measures. Police said they arrested or turned away multiple people during checks on roads leading into the city.

Just over a week ago, a coronavirus protest in the port city of Rotterdam degenerated into violence that prompted police to open fire on rioters who threw rocks and fireworks at officers, vandalized police cars and set fires in the city’s streets.

In Nijmegen on Sunday, Monique van Aken said she doesn’t expect this lockdown to be the last.

“I think it’s going to be happening all the time. It’s going to mutate, and we have to be prepared for that,” she said. “After this variant, new variants will come.”

Follow all AP stories on the pandemic at https://apnews.com/hub/coronavirus-pandemic.

Denial of responsibility! Verve Times is an automatic aggregator of the all world’s media. In each content, the hyperlink to the primary source is specified. All trademarks belong to their rightful owners, all materials to their authors. If you are the owner of the content and do not want us to publish your materials, please contact us by email – admin@vervetimes.com. The content will be deleted within 24 hours.
AmsterdamBusinesscoronavirusCOVID-19 PandemicDisease outbreaksDiseases and conditionseuropeGeneral news
0
Share FacebookTwitterGoogle+ReddItWhatsAppPinterestEmail

Can you ever use lube as a facial primer? | Fashion

Popular Netflix Series Jumps to the Top of Streaming Charts…