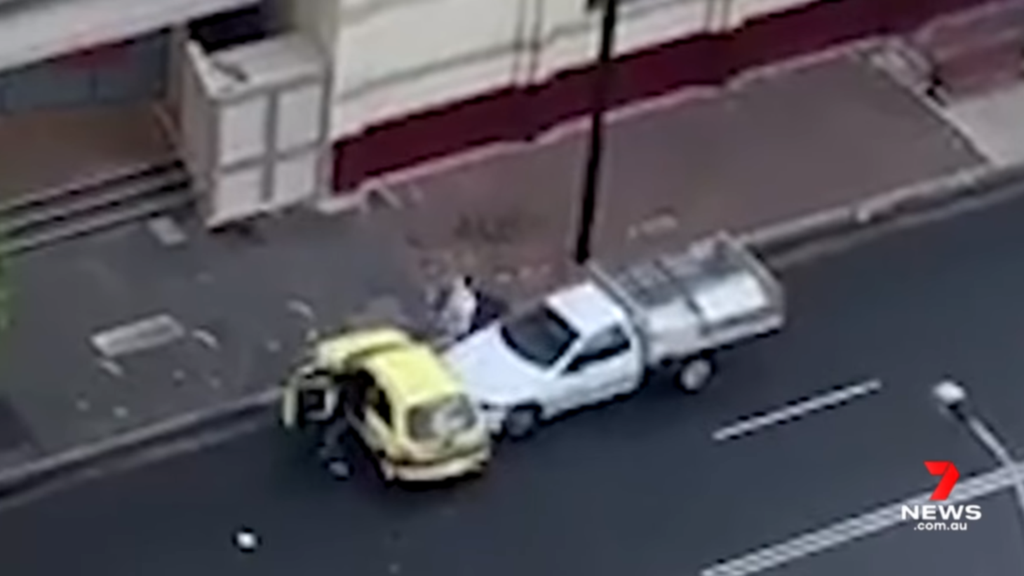 A Newcastle mother will spend more than two years behind bars after a shocking road rage incident which almost killed her ex-boyfriend and caused multiple collisions.

On Saturday, the Newcastle Local Court sentenced Kristianne Bycroft to two years and four months in jail for her actions.

The 29-year-old mother was trying to chase down a former boyfriend who owed her money when she said she was overcome with rage.

Watch the road rage incident in the video player below.

Multiple videos taken by bystanders, which were played to the court and went viral around the world, shows Bycroft ramming into cars in November last year.

Bycroft had a fight with her 55-year-old partner in a KFC carpark on November 13.

She then followed the man in her ute, hitting his car several times before hitting another car at a busy intersection.

Her ex-partner leapt out of his Barina moments before she slammed into it multiple times.

Witnesses couldn’t stop the 29-year-old as she chased down her partner over $300.

The court heard the young mum’s three-minute rampage put a significant number of lives at risk.

Bycroft’s lawyer told the court the young mum had suffered years of abuse in a toxic relationship with a man who squandered her inheritance.

The court heard the $300 that was owed to her was all the money she had left and this is what tipped her “over the edge”.

Bycroft said she felt “utter shame” and “regret” and is humiliated by her actions.

With time already served, she could walk free by March next year.

She is banned from driving for three years.

Denial of responsibility! Verve Times is an automatic aggregator of the all world’s media. In each content, the hyperlink to the primary source is specified. All trademarks belong to their rightful owners, all materials to their authors. If you are the owner of the content and do not want us to publish your materials, please contact us by email – [email protected]. The content will be deleted within 24 hours.
Car AccidentsCar CrashNewsNSW NewsNSW PoliceSydney
0
Share FacebookTwitterGoogle+ReddItWhatsAppPinterestEmail