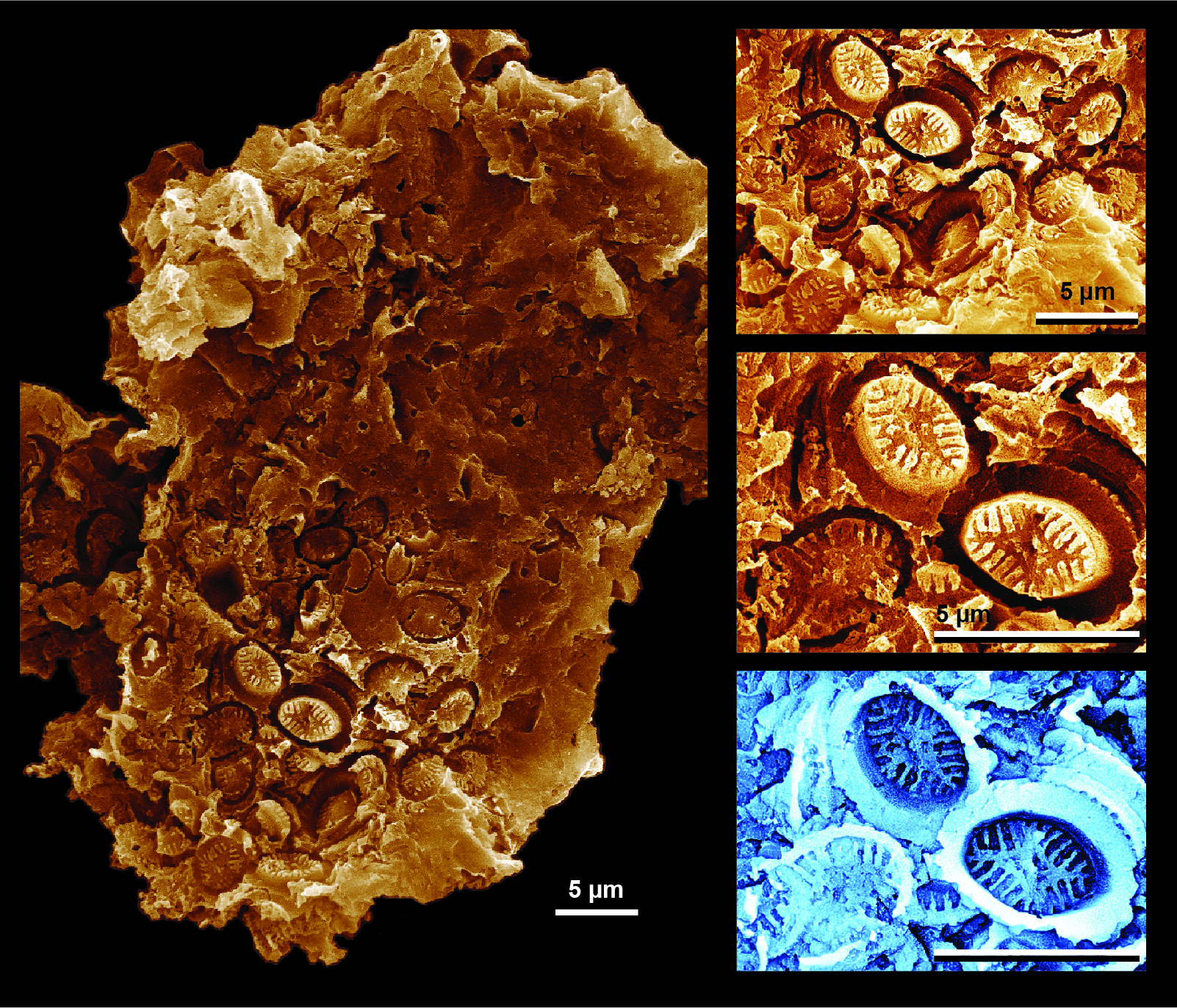 An international team of scientists from UCL (University College London), the Swedish Museum of Natural History, Natural History Museum (London) and the University of Florence have found a remarkable type of fossilization that has remained almost entirely overlooked until now.

The fossils are microscopic imprints, or “ghosts”, of single-celled plankton, called coccolithophores, that lived in the seas millions of years ago, and their discovery is changing our understanding of how plankton in the oceans are affected by climate change.

Coccolithophores are important in today’s oceans, providing much of the oxygen we breathe, supporting marine food webs, and locking carbon away in seafloor sediments. They are a type of microscopic plankton that surround their cells with hard calcareous plates, called coccoliths, and these are what normally fossilize in rocks.

Declines in the abundance of these fossils have been documented from multiple past global warming events, suggesting that these plankton were severely affected by climate change and ocean acidification. However, a study published today in the journal Science presents new global records of abundant ghost fossils from three Jurassic and Cretaceous warming events (94, 120 and 183 million years ago), suggesting that coccolithophores were more resilient to past climate change than was previously thought.

“The discovery of these beautiful ghost fossils was completely unexpected”, says Dr. Sam Slater from the Swedish Museum of Natural History. “We initially found them preserved on the surfaces of fossilized pollen, and it quickly became apparent that they were abundant during intervals where normal coccolithophore fossils were rare or absent—this was a total surprise!”

Despite their microscopic size, coccolithophores can be hugely abundant in the present ocean, being visible from space as cloud-like blooms. After death, their calcareous exoskeletons sink to the seafloor, accumulating in vast numbers, forming rocks such as chalk.

“The preservation of these ghost nannofossils is truly remarkable,” says Professor Paul Bown (UCL). “The ghost fossils are extremely small ‒ their length is approximately five thousandths of a millimeter, 15 times narrower than the width of a human hair! ‒ but the detail of the original plates is still perfectly visible, pressed into the surfaces of ancient organic matter, even though the plates themselves have dissolved away”.

The ghost fossils formed while the sediments at the seafloor were being buried and turned into rock. As more mud was gradually deposited on top, the resulting pressure squashed the coccolith plates and other organic remains together, and the hard coccoliths were pressed into the surfaces of pollen, spores and other soft organic matter. Later, acidic waters within spaces in the rock dissolved away the coccoliths, leaving behind just their impressions—the ghosts.

“Normally, paleontologists only search for the fossil coccoliths themselves, and if they don’t find any then they often assume that these ancient plankton communities collapsed,” explains Professor Vivi Vajda (Swedish Museum of Natural History). “These ghost fossils show us that sometimes the fossil record plays tricks on us and there are other ways that these calcareous nannoplankton may be preserved, which need to be taken into account when trying to understand responses to past climate change”.

Professor Silvia Danise (University of Florence) says: “Ghost nannofossils are likely common in the fossil record, but they have been overlooked due to their tiny size and cryptic mode of preservation. We think that this peculiar type of fossilization will be useful in the future, particularly when studying geological intervals where the original coccoliths are missing from the fossil record”.

“The ghost fossils show that nannoplankton were abundant, diverse and thriving during past warming events in the Jurassic and Cretaceous, where previous records have assumed that plankton collapsed due to ocean acidification,” explains Professor Richard Twitchett (Natural History Museum, London). “These fossils are rewriting our understanding of how the calcareous nannoplankton respond to warming events.”

Finally, Dr. Sam Slater explains: “Our study shows that algal plankton were abundant during these past warming events and contributed to the expansion of marine dead zones, where seafloor oxygen-levels were too low for most species to survive. These conditions, with plankton blooms and dead zones, may become more widespread across our globally warming oceans.”

Citation:
Discovery of ‘ghost’ fossils reveals plankton resilience to past global warming events (2022, May 19)
retrieved 20 May 2022
from https://phys.org/news/2022-05-discovery-ghost-fossils-reveals-plankton.html

Perron scores twice, Blues even series with 4-1 win over Avs