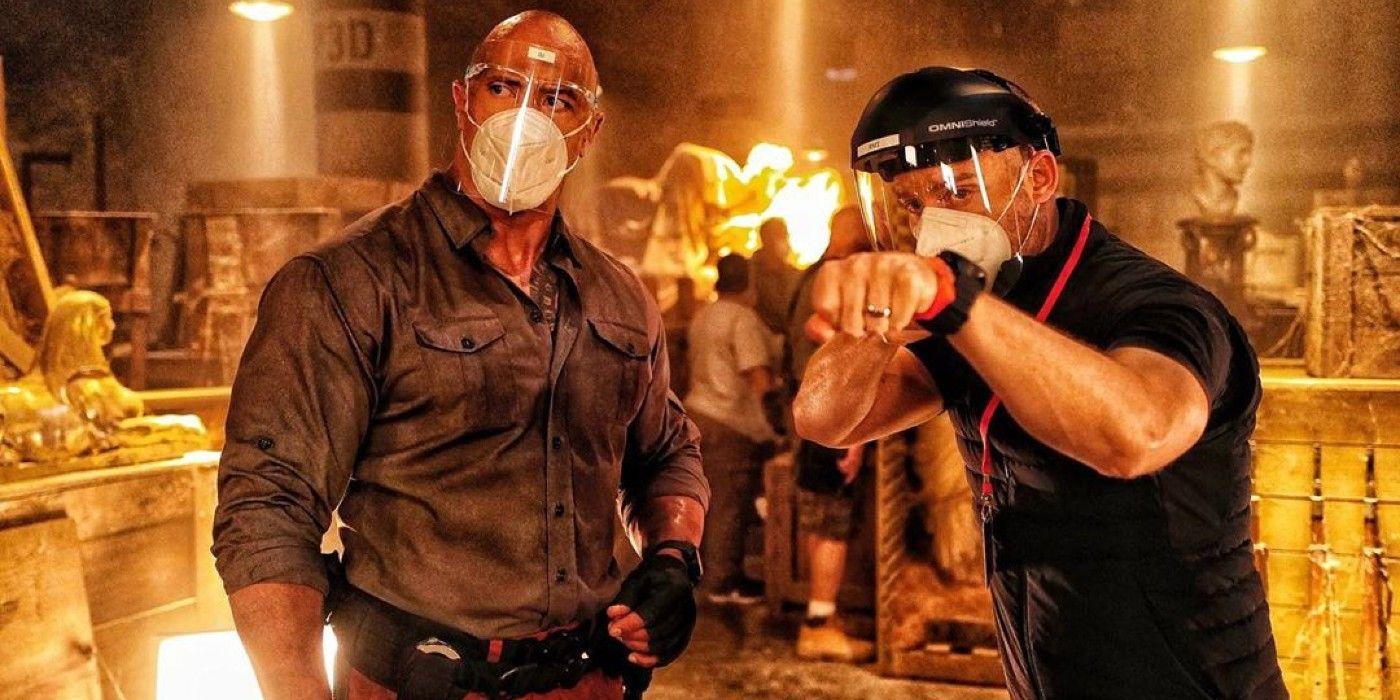 Director Confirms Sequel Talks With Netflix But There’s a Catch

Red Notice is Netflix’s newest action/comedy which sees Dwayne Johnson, Ryan Reynolds, and Gal Gadot on a globetrotting adventure. The movie, which was helmed by Rawson Marshall Thurber, not only had Netflix’s biggest opening day for any film, but it also became the streaming service’s most-watched movie. Despite the movie’s weak reviews from critics, audiences seem to be loving it. In fact, there’s a good chance the movie will get a sequel. During a recent chat with Collider, Thurber teased that he has some ideas.

“I’m not working on the script for a sequel…I’ve certainly been noodling with what I would do for a follow-up and not to telltale out of school but yeah Netflix…we’ve been having those conversations,” the director shared.

Thurber recently spoke with Empire Magazine about working with the Red Notice cast. “I mean, talk about charisma,” Thurber shared. “So what does happen when you get Deadpool, Wonder Woman, and Black Adam in the immediate vicinity of one another? I feel very, very fortunate. It’s a little bit like directorial cheating, having all three of them together in the same frame. Chemistry is just not a function of writing or even directing – it’s a function of casting. You either have it or you don’t. And those guys have something special.”

Back when it was revealed that 150 million people had watched Red Notice, Thuber and Johnson took to Instagram to celebrate. “Wow 🙏🏾 me and @rawsonthurber (writer, director, creator of RED NOTICE💎) were TRULY SURPRISED, coming home to this tonight from our beautiful families!!!,” Johnson wrote. “🎈🎈CONGRATULATIONS 🎈🎈 Our RED NOTICE movie is on its way to becoming the MOST WATCHED MOVIE IN THE HISTORY OF NETFLIX!!! 🔥🔥 In our opening weekend alone, OVER 150 MILLION PEOPLE WATCHED RED NOTICE.🔥🔥 And ABSOLUTELY LOVED IT with a MASSIVE 92% AUDIENCE SCORE 🌍 We’re blessed and grateful boys ~ @laurenhashianofficial @sarahkthurber you’re our f’n ROCKSTARS and Jazzy, Kensie, Tia, Sutton we love you with all we got!! ❤️ THANK YOU EVERYONE WORLDWIDE for loving RED NOTICE.” You can watch their video below:

In Red Notice, Johnson’s federal agent character is on the hunt for Reynolds’ art thief. “[Dwayne plays an] FBI profiler who specializes in art crime,” Thurber explained. “He is on the hunt for Ryan Reynolds, who plays the most wanted art thief in the world. Gal Gadot plays this mysterious figure in the art world. As the say… high-jinks ensue.”

Would you like to see a Red Notice sequel? Tell us in the comments!

Denial of responsibility! Verve Times is an automatic aggregator of the all world’s media. In each content, the hyperlink to the primary source is specified. All trademarks belong to their rightful owners, all materials to their authors. If you are the owner of the content and do not want us to publish your materials, please contact us by email – admin@vervetimes.com. The content will be deleted within 24 hours.
Rawson Marshall Thurberred notice
0
Share FacebookTwitterGoogle+ReddItWhatsAppPinterestEmail