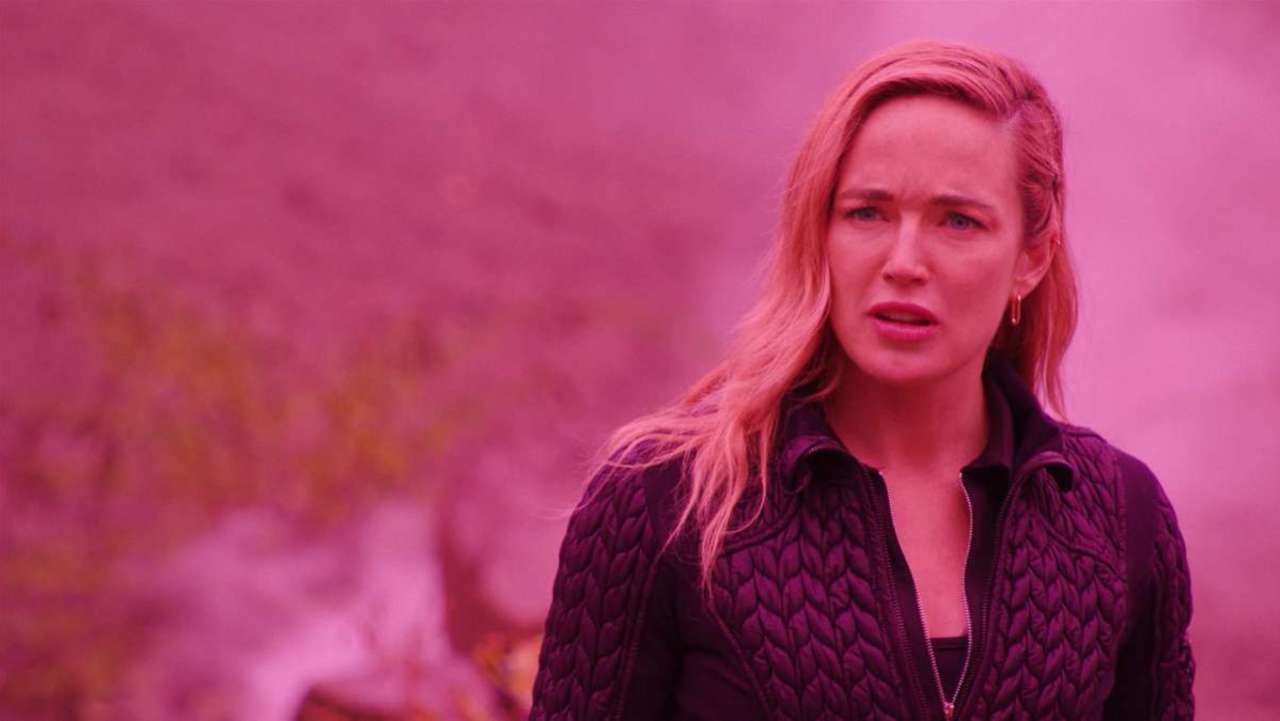 DC’s Legends of Tomorrow Recap: Here’s Everything You Missed in “Meat: The Legends”

DC’s Legends of Tomorrow‘s sixth season got off to a zany start last week when the time-traveling heroes discovered that their captain Sara Lance (Caity Lotz) had been kidnapped by aliens — one of which was revealed to be none other than Gary Green (Adam Tsekhman). That situation ended up getting even more complicated when Sara’s attempt to get back home to Earth resulted in the release of aliens into the timeline before the spaceship she was on ended up running out of fuel and went hurtling toward a planet.

The aliens in the timeline are proof Sara’s alive, however, and the Legends have enlisted Spooner (Lisseth Chavez) to help them deal with the aliens and find out where Sara is. In this week’s episode, that means tracking down the first alien to pop up messing with the timeline in San Bernadino, California circa 1955 while for Sara, it means encountering an unexpected figure on an alien world who may or may not present a way home.

Need to get caught up on the major details and stories from this week’s episode of DC’s Legends of Tomorrow? We’re here to help. Here are the major plot points for “Meat: The Legends”. Warning: Full spoilers for the episode beyond this point. Read on only if you want to know.

The episode picks up where the Season 6 premiere left off with the realization that aliens have been dropped into the timeline. While one hits the Waverider’s windshield, they quickly get a lead on where one of the aliens ended up: San Bernadino, California 1955 where all of the city’s residents were murdered practically overnight. Ava wants Spooner to help talk to the aliens, but she’s very reluctant to help after finding out that per Gideon there’s nothing in her head to be removed.

The Legends head to Big Bang Burger in 1955 where the team splits up to mingle and see if they can track down the alien. Zari, Mick, Behrad, and Nick sit down to eat. Zari uses one of her branded supplements and she suggests to Behrad that they should start sharing the totem. Behrad disagrees. Mick tries to listen in on the cops. Ava and Constantine talk to the police, who are sent off on a call and Spooner starts reacting, noting that the alien is hungry. Spooner confronts the waitress, but Mick says he’s found the alien by interpreting the police codes. The alien likes meat. Zari, Behrad and Nick get jobs at Big Bang.

In space, Gary and Sara crash land on an alien world. Gary explains that he and Kayla were hired by a power-hungry space lord and they’ve crashed on his world. Sara soon observes a dog outside on the planet and decides it means the air is breathable so she’s going to follow the dog. Gary doesn’t have any specific skills that helps them find the dog. He also opens up to Sara about his life a bit. They come across the dog who has a massive bone and they continue to follow him. The dog leads them to a hut on the planet where they’re met by a woman with a spear — Amelia Earhart.

Ava, Spooner, Constantine, and Mick go to the butcher shop and find the Big Bang alien mascot wildly eating meat but he’s not the alien. Gideon confirms this, but Spooner is still getting alien vibes so Constantine performs magic, prompting the guy to projectile vomit. Turns out the sauce at Big Bang is the alien. It’s a parasite.

At Big Bang, Zari and Behrad continue to clash about the totem, but business begins to pick up. Ava contacts the team to tell them to stop serving burgers because anyone who has eaten them is infected. They start to clear things out when the owner, Burt, tries to stop them but they’re soon confronted by a frenzied waitress. The sauce turns out to be the burger joint’s owner’s wife Rhonda’s secret recipe. Ava, Mick, Spooner, and Constantine go to the wife’s house and Ava continues to insist that Spooner talk to the alien but Spooner keeps trying to tell her that’s not how it works. At the house, Ava discovers the alien goo is dripping from an air conditioning vent into the secret sauce.

And the sauce also has secrets

Spooner and Constantine observe the alien capsule in the garage and Ava explores the attic. Spooner reads the capsule and it clues them into the goo not actually being the alien and in the attic, Ava encounters the alien’s pod, but she’s knocked out by Rhonda who is protective of the alien. Turns out, the business was failing and when the sauce dripped onto dinner accidentally and was a hit, she opted to use it to save the business and her marriage. Spooner and Constantine end up saving Ava, knocking Rhonda out. When she comes to, the alien emerges from her pod and eats Rhonda before escaping.

At Big Bang, the patrons have gone berserk for meat. Zari has the idea to use her Dragon Ash supplements on the crazy patrons so she and Behrad cook it up into the burgers. Behrad gives her the totem to use. They work together to serve the Dragon Ash laced burgers and soon enough, people pass out. However, the alien is headed toward Big Bang Burger and wants to eat more people. It arrives and consumes Burt. Spooner takes down the alien.

Not what it seems

Amelia doesn’t know how she ended up there or where they are exactly. When Sara asks her to help repair the ship, Amelia becomes insistent that they eat with her before doing so. It soon becomes aparent that Amelia is not actually Amelia, but likely some sort of alien herself. She attacks Sara, injuring her. Sara and Gary escape, but soon lights appear. They’re being tracked.

Welcome to the team

n the Waverider, Spooner and Ava bond a bit. Spooner reveals that her mom was also taken by aliens, but not returned. Killing the alien on the mission didn’t make her feel better and Ava invites her to join the team. Spooner plans to keep on killing aliens until they find Sara and she gets closure. The timeline is restored, with the waitress taking over Burt’s business and rebranding it as Big Belly Burger. Behrad and Zari talk about the totem. Inside the totem, Zari 1.0, frustrated with their conversation, snaps her fingers and splits the totem in two, one for each.

Denial of responsibility! Verve Times is an automatic aggregator of the all world’s media. In each content, the hyperlink to the primary source is specified. All trademarks belong to their rightful owners, all materials to their authors. If you are the owner of the content and do not want us to publish your materials, please contact us by email – [email protected]. The content will be deleted within 24 hours.
dc
0
Share FacebookTwitterGoogle+ReddItWhatsAppPinterestEmail

‘No such thing as impossible:’ Nunavut MP…

Moscow will give away free cars to people who get COVID…