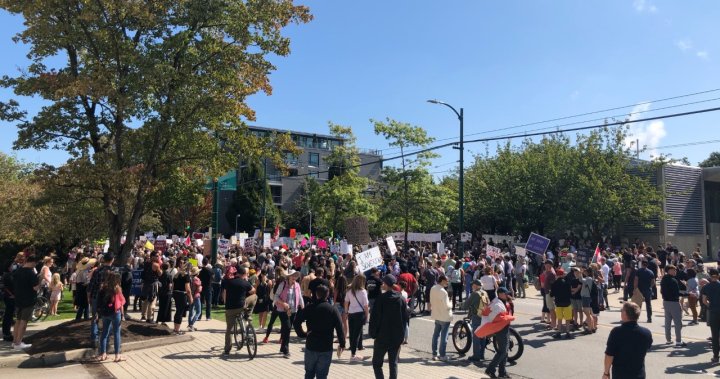 Protesters opposed to COVID-19 protocols and vaccine mandates gathered at several B.C. hospitals on Wednesday for what was billed as a “world-wide walkout” for “health freedom.”

“Stand up for freedom now or lose everything,” reads the tagline on a poster for the event, which also advertised rallies at hospitals across the country.

Large crowds gathered outside Vancouver General Hospital and Kelowna General Hospital, where the sounds of honking horns and protesters’ bullhorns filled the air. Organizers were also promoting similar protests outside the the B.C. legislature in Victoria and Royal Inland Hospital in Kamloops.

In Vancouver, where police estimated about 5,000 protesters at the event’s peak, many told Global News they rankled at being called “anti-vaxxers,” and said they felt like they weren’t being offered a true choice when it came to the vaccine.

“There’s coercion, they’re basically saying they’re going to strip you from society if you don’t get it,” one protester told Global News.

This anti-all things covid protest in Vancouver was advertised as a protest organized by “Canadian Frontline Workers.”

I was here for about an hour — didn’t see or talk to a current healthcare worker. pic.twitter.com/g3TuR226AP

Health workers in the hospital look on.
Most have say they feel extremely disrespected by the protest. pic.twitter.com/BCm8og9iVg

On Vancouver Island, where several protests took place, Island Health said health-care workers were “verbally abused” as they came and left work, and that in at least one case a health-care worker was assaulted.

“What happened to our health-care teams today is not acceptable to me nor to the people and communities they serve. Our health-care teams deserve respect and support, no matter what personal beliefs we hold,” Island Health CEO Kathy MacNeil said in statement.

Vancouver police urged drivers to avoid the area of 12 Avenue and Cambie Street as demonstrators made their way from the hospital to City Hall.

Police said they were monitoring the protest, and that public safety remained their priority.

In Kelowna, RCMP said it would ensure the protest would not interfere with hospital operations, and that officers would address non-compliance of health orders on a “case-by-case basis.”

In Kamloops, RCMP said one man was arrested for allegedly throwing eggs at protesters.

Ambulance with flashing lights makes it was through anti-vaxx protestors at Vancouver City Hall. 12th and Cambie is an essential route for emergeny vehicles. @CKNW @GlobalBC pic.twitter.com/bZmQsx8eqm

At one point the Vancouver crowd was forced to part as an ambulance with lights and sirens activated slowly made its way through the protesters. Demonstrators could be heard chanting “lock her up” in relation to provincial health officer Dr. Bonnie Henry.

A spokesperson for BC Emergency Health Services said it was “slow going” for ambulances in the area, but that it had not had to re-direct any ambulances from hospitals facing protests.

“There has been some reports of slowdowns as paramedics navigate through heavily congested areas. We’re doing our best to arrive as safely as possible at hospital emergency departments around the province,” the spokesperson said.

Several health-care workers took to social media to express their disgust at the protests.

View from the OR today. The same OR that is running at <60% capacity for the 3rd week in a row due to an overwhelming # of COVID+ unvaxxed hospitalizations. I’ve never been so disappointed in my community. pic.twitter.com/bAfn3iunv2

Dr. Gareth Eeson, a surgical oncologist at Kelowna General Hospital, posted a video of protestors seen through a window from an operating room.

“View from the OR today. The same OR that is running at <60% capacity for the 3rd week in a row due to an overwhelming # of COVID+ unvaxxed hospitalizations. I’ve never been so disappointed in my community,” he wrote.

On Facebook, physician Kari Way posted that she accepted people’s right to protest, but that doing it outside of a hospital made health-care workers feel “deeply disrespected.”

According to Wray, the protests had left some nurses and family members of critically ill patients to tears, blocked ambulnaces from accessing the emergency room, taken up parking for pregnant women in labour and distressed confused elderly patients.

“We were working hard long before the pandemic. We miss out on sleep, emptying bladders, meals, life to serve. Our nurses and staff are stellar- and they are burning out. Morale is low. Tensions are high. Beds are full.

But we wake up. Tired. We show up. Discouraged. We work more than our required time. Because our patients need it.

In the wake of the protests, Premier John Horgan released a statement supporting health-care workers.

“Health-care workers have been true heroes throughout the COVID-19 pandemic, working long hours in difficult conditions to care for us, our loved ones and to keep our communities safe,” he said in the statement.

“While everyone has the right to peaceful protest, the targeting and harassment of health-care workers at health-care facilities today is completely unacceptable.”

The events were organized by a group calling itself “Canadian Frontline Nurses.”

The group’s organizers include Kristen Nagle, an Ontario nurse who was fired following a trip to anti-lockdown events Washington, D.C., amid COVID-19 restrictions, and Dr. Stephen Malthouse, a B.C. physician who the CBC reports has been reprimanded by the College of Physicians and Surgeons of B.C. for spreading COVID-19 misinformation.

On its Facebook page, the group also clarified that it was not asking nurses to walk out of hospitals and abandon their patients.

In promotional materials for the demonstrations, the group urged people to “stand together (and) reject the tyranny of mandatory vaccines.”

While vaccines are not mandatory for the general public in B.C., staff in long-term care and assisted-living facilities — the sites of hundreds of COVID-19 deaths — will be required to be immunized by Oct. 12.

On Tuesday, provincial health officer Dr. Bonnie Henry hinted that a wider mandate for all healthcare workers could be coming soon.

Starting Sept. 13 vaccines will be required for the public to access a variety of non-essential services, including dining in at restaurants or attending indoor concerts or sporting events.

While fully vaccinated people now make up more than two thirds of all British Columbians, provincial data shows they accounted for just two in 10 cases in the past week, and just over one in 10 hospitalizations over the last two weeks.

Denial of responsibility! Verve Times is an automatic aggregator of the all world’s media. In each content, the hyperlink to the primary source is specified. All trademarks belong to their rightful owners, all materials to their authors. If you are the owner of the content and do not want us to publish your materials, please contact us by email – [email protected]. The content will be deleted within 24 hours.
anti-vaxbc coronavirusbc covidbc covid updatebonnie henry updateCOVIDcovid 19 bccovid protest
0
Share FacebookTwitterGoogle+ReddItWhatsAppPinterestEmail

Mark Levin: How many Anne Franks are in Afghanistan tonight?