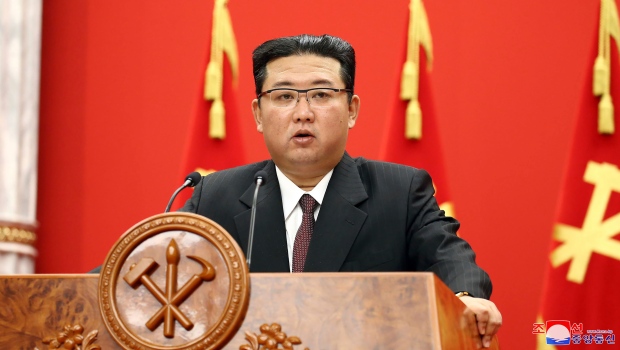 SEOUL, SOUTH KOREA —
After spending two years in a strict lockdown because of the COVID-19 pandemic, North Korea may finally be opening up — slowly. The reason could reflect a growing sense of recognition by the leadership that the nation badly needs to win outside economic relief.

The North’s tentative reopening is seen in the apparent resumption of North Korean freight train traffic into neighbouring China. But it comes even as Pyongyang has staged several weapons tests, the latest being two suspected ballistic missiles on Thursday, and issued a veiled threat about resuming tests of nuclear explosives and long-range missiles targeting the American homeland.

The apparently divided message — opening the border, slightly, on one hand, while also militarily pressuring Washington over a prolonged freeze in nuclear negotiations — likely signals a realization that the pandemic has worsened an economy already damaged by decades of mismanagement and crippling U.S.-led sanctions over North Korean nuclear weapons and missiles.

According to South Korean estimates, North Korea’s crucial trade with its ally China shrank by about 80% in 2020 before plunging again by two-thirds in the first nine months of 2021 as it sealed its borders.

The partial reopening of the border also raises questions about how North Korea plans to receive and administer vaccines following a yearlong delay in its immunization campaign.

“North Korea could end up being the planet’s last battlefield in the war against COVID-19. Even the poorest countries in Africa have received outside aid and vaccines or acquired immunity through infection, but North Korea is the only country in the world without a real plan,” said analyst Lim Soo-ho at Seoul’s Institute of National Security Strategy, a think tank run by South Korea’s main spy agency.

Commercial satellite images indicate that the first North Korean freight train that crossed the Yalu River last week then returned from China and unloaded cargo at an airfield in the border town of Uiju, according to the North Korea-focused 38 North website. The airfield is believed to have been converted to disinfect imported supplies, which may include food and medicine.

China’s Foreign Ministry has said trade between the border towns will be maintained while pandemic controls stay in place. But South Korean officials say it isn’t immediately clear whether the North is fully reopening land trade with China, which is a major economic lifeline.

Some South Korean media have speculated North Korea may have temporarily reopened the railroad between Sinuiju and China’s Dandong just to receive food and essential goods meant as gifts for its people during important holidays, including the 80th birth anniversary of leader Kim Jong Un’s father next month, and the 110th birth anniversary in April of his grandfather who founded North Korea.

Many experts, however, say it’s more likely that the pandemic’s economic strain is forcing North Korea to explore a phased reopening of its borders that it could quickly close if greater risks emerge.

Following two years of extreme isolation and economic decay, Pyongyang’s leadership is looking for more sustainable ways to deal with a pandemic that could last years.

While North Korea has so far claimed zero virus infections, it also calls its antivirus campaign a matter of “national existence.” It has severely restricted cross-border traffic and trade, banned tourists and kicked out diplomats, and is even believed to have ordered troops to shoot-on-sight any trespassers.

Pyongyang’s leadership knows that a major COVID-19 outbreak would be devastating because of North Korea’s poor health care system and may even fan social unrest when combined with its chronic food shortage, experts say.

South Korean officials have said that North Korea established disinfection zones in recent months at border towns and seaports. The World Health Organization said in October that the North had started receiving shipments of medical supplies transported by sea from China through its port of Nampo.

The pandemic is another difficulty for Kim, who gained little from his nuclear disarmament-for-aid diplomacy with former U.S. President Donald Trump. Those talks imploded in 2019.

Kim in 2020 acknowledged that his previous economic plans weren’t working and opened 2021 by issuing a new development plan for the next five years.

But North Korea’s review of its 2021 economy during a December ruling party meeting indicated that the first year of the plan was disappointing, Lim said. A rare piece of tangible progress was a modest increase in food production, which rebounded from a 2020 marked by crop-killing storms and floods.

North Korea’s resumed trade with China will be driven by imports. Most of North Korea’s major export activities are blocked under international sanctions tightened since 2016 after Kim accelerated nuclear and missile development.

The North may focus on importing fertilizer to boost food production. It also needs construction materials for development projects important to Kim. Factory goods and machinery are crucial to revive industrial production, which has been decimated by two years of halted trade.

Experts, however, still expect North Korea’s trade with China to be significantly smaller than pre-pandemic levels.

North Korea can’t immediately purchase a huge amount of goods because the multiyear toll of sanctions and pandemic-related difficulties has thinned out foreign currency reserves.

“Still, it’s clear that North Korea isn’t a country that can survive without imports for two or three years, so it’s certain they will attempt to slowly increase imports within a limited scope,” said Go Myong-hyun, an analyst at Seoul’s Asan Institute for Policy Studies.

North Korea has so far shunned millions of vaccine shots offered by the U.N.-backed COVAX distribution program, possibly reflecting an unease toward accepting international monitors. But the country may still seek help from China and Russia to inoculate workers, officials and troops in border areas as it proceeds with a phased resumption of trade, said Hong Min, an analyst at Seoul’s Korea Institute for National Unification.

North Korea may also be forced to adopt a scaled-back vaccination program by tightly restricting access to border areas and providing regular testing and vaccination for border workers.

“It could take nearly 100 million shots to fully vaccinate the North Korean population of more than 25 million, and the country will never get anything close to that,” Lim said.

Denial of responsibility! Verve Times is an automatic aggregator of the all world’s media. In each content, the hyperlink to the primary source is specified. All trademarks belong to their rightful owners, all materials to their authors. If you are the owner of the content and do not want us to publish your materials, please contact us by email – [email protected]. The content will be deleted within 24 hours.
CanadaCanada Coronaviruscanadianscoronavirus outbreakCOVIDcovid-19covid-19 canadainteractive
0
Share FacebookTwitterGoogle+ReddItWhatsAppPinterestEmail

Change of heart? It may affect thinking and memory skills in middle age — ScienceDaily