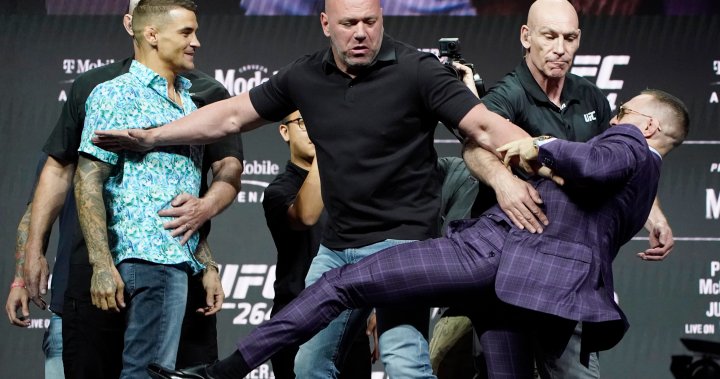 LAS VEGAS (AP) — Conor McGregor wore a plaid purple suit and sunglasses when he performed some of his greatest Vegas hits at his UFC 264 news conference Thursday ahead of his latest attempt to roll back the mixed martial arts clock.

The biggest star in combat sports preened, strutted and misbehaved at T-Mobile Arena, delighting his fans in a raucous crowd anticipating the finale to one of the biggest fight trilogies in recent history on Saturday night.

McGregor threw a bottle of Dustin Poirier’s hot sauce into the stands early on and then prowled the stage, security guards separating him from his opponent. He threw a kick at Poirier during their event-ending faceoff — when he was too far away to connect, of course.

In between, the loquacious Irishman insulted Poirier’s wife, repeatedly vowed to kill Poirier in the cage, questioned Poirier’s love for his native Louisiana and called Poirier a common epithet that’s much less loaded on McGregor’s side of the pond.

Poirier and the assembled fans got another recital of McGregor’s classic verbal combination of dexterity and brutality, the secret to burrowing inside the heads of several opponents during his rocket ride into the sports stratosphere in the previous decade.

“On Saturday night, you’re going to get walked around that octagon like a dog and then put to sleep,” McGregor said to Poirier.

“He’s not in the same stratosphere as me,” McGregor insisted later. “The man looks disgraceful up here. He looks frail at this weight now. The weight cut is getting to him.”

“He’s going out on a stretcher in this fight,” McGregor said finally.

And while McGregor’s fans drank it up faster than a double shot of their hero’s Proper Twelve whiskey, Poirier appeared to weather the verbal blows perfectly well.

After all, McGregor’s carefully crafted persona doesn’t hit quite so hard when McGregor has had his hand raised in victory just once since the Obama administration: For all his fame, fortune and celebrity, he’s 1-2 in the cage and 0-1 in the boxing ring since November 2016.

Poirier laughed at the difference from the promotion for their second fight last January, when McGregor was disarmingly friendly and charming throughout. Even with a resumption of hostilities, Poirier insisted he won’t allow McGregor into his head as he did in 2014, when McGregor knocked him out in their first meeting.

“I see a man here that I’ve defeated, and I know I can defeat again,” Poirier said.

McGregor has reached a level of power in the fight game where he’s no longer defined by mere wins and losses. His appearances in a cage or a ring are international events, and he has built a celebrity persona that towers above his peers even as its foundation of sports success eroded over the past half-decade.

But instead of settling into what would likely be several comfortable years fighting non-title UFC spectacles and taking more cash-grab boxing matches, McGregor chose to return to his last defeat. Instead of moving on, he wants to go back, to get it right — and to set a new path in front of the UFC’s first full-capacity crowd in its hometown since the start of the pandemic.

T-Mobile Arena hadn’t been built when the duo first met in 2014 and McGregor stopped Poirier in 106 seconds. Their rematch six months ago was in Abu Dhabi inside the UFC’s coronavirus bubble, and Poirier stopped McGregor in the second round of an equally emphatic victory.

“He’s Buster Douglas,” McGregor said. “It was a fluke win, and I’m going to correct it on Saturday night.”

McGregor has hinted at what he suspects to be the causes of his one-sided loss in January to Poirier, who leg-kicked McGregor into serious pain before finishing him with precise punches.

McGregor says he wasn’t completely focused on MMA last year, and he had already arranged his post-fight boxing training camp to prepare for a lucrative fight with Manny Pacquiao. McGregor also claims he was overly confident and too nice to Poirier, thinking back to his win seven years earlier and assuming he could do the same things again.

The niceness was mostly eliminated after their second bout, which included an extended brouhaha over a charity donation promised by McGregor to Poirier. McGregor already returned to his usual anarchic shenanigans on social media, calling Poirier an “inbred hillbilly” and further insulting Poirier’s wife.

Away from the public, McGregor says he went back to work. He moved his training camp to Southern California, working out in strict secrecy with his closest trainers and coaches. He changed his workout and diet regimens, moving to a six-meals-a-day consumption schedule in a bid to improve both his conditioning and his power.

Although he performed like a Vegas lounge singer Thursday, McGregor insists we’ll see all the hits on Saturday night.

“My mindset is I’m back on the building sites with a hard hat and two hammers in my hands,” said McGregor, a former labourer and apprentice plumber before his MMA career. “That’s my mindset. I’m not relishing in my past accomplishments. I’m back.”

Denial of responsibility! Verve Times is an automatic aggregator of the all world’s media. In each content, the hyperlink to the primary source is specified. All trademarks belong to their rightful owners, all materials to their authors. If you are the owner of the content and do not want us to publish your materials, please contact us by email – [email protected]. The content will be deleted within 24 hours.
Conor McGregorDustin PoirierFightingMixed Martial ArtsMMASportsUFCUFC 264
0
Share FacebookTwitterGoogle+ReddItWhatsAppPinterestEmail

How Richard Branson will ride own rocket to space

The Best Hiking Gear for Women (Cute and Comfortable!)

WHO: China's COVID plan is 'unsustainable'…