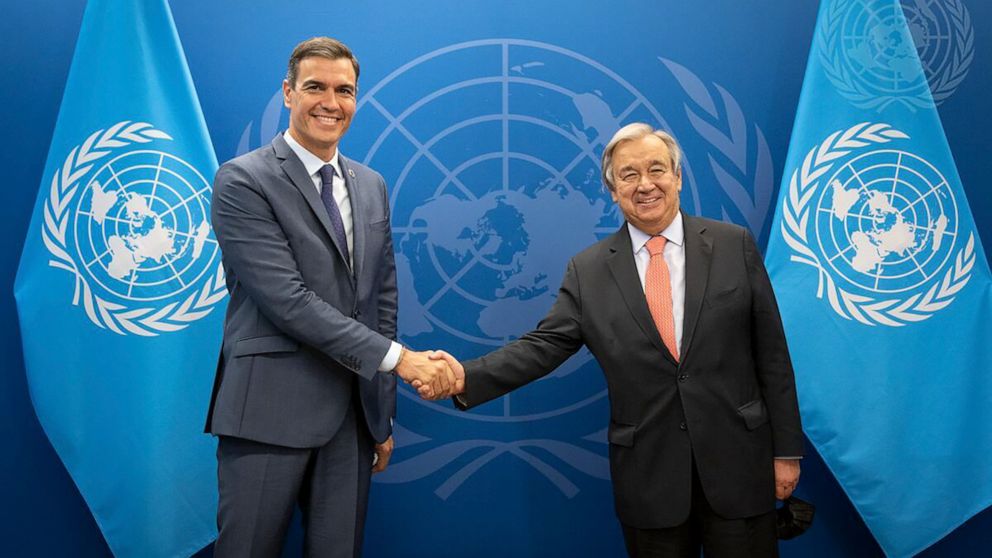 NEW YORK — Leaders from Europe, the Americas and Africa called Tuesday for urgent action and funding to ease a growing global food security crisis that has been exacerbated by Russia’s war with Ukraine and, thanks to climate change, threatens to get worse in coming years.

Speaking at a Global Food Security Summit on the sidelines of the annual U.N. General Assembly, the leaders demanded an end to the war, with each calling it a needless “aggression” and Spain’s prime minister accusing Russian President Vladimir Putin of trying to “blackmail” the world with hunger by causing severe disruptions in the export of Ukrainian grain.

The leaders also took Russia to task for spreading misinformation about the destination of Ukrainian grain that has been shipped out of the Black Sea under a U.N.-brokered agreement mediated by Turkey.

“Russia must end its illegal war against Ukraine, which has certainly been an essential source of the world’s food supply,” Spanish Prime Minister Pedro Sanchez told the gathering. “The truth is that Putin is trying to blackmail the international community with a large part of the world’s food needs. We cannot combat hunger without peace. The world is expecting much from us. Let’s act together, and let’s act now.”

Last week, the U.N. food chief warned the world is facing “a global emergency of unprecedented magnitude,” with up to 345 million people marching toward starvation — and 70 million pushed closer to starvation by the war in Ukraine. David Beasley, executive director of the U.N. World Food Program, told the U.N. Security Council that the number is 2½ times the number of acutely food-insecure people before the COVID-19 pandemic hit in 2020 and that there is a real risk of “multiple famines” this year.

“This is not acceptable. This is not sustainable,” said European Commission President Charles Michel. “Russia’s war against the people of Ukraine is a test — a test of our international rules-based order.”

Along with Sanchez, the event featured Senegalese President Macky Sall, German Chancellor Olaf Scholz, Colombian President Gustavo Petro and U.S. Secretary of State Antony Blinken filling in for President Joe Biden. Michel opened the event by calling out what he said were Russia’s lies about Ukrainian grain not getting to countries that need it most.

“Contrary to Russian disinformation, this food is getting to Africa, the Middle East and Asia,” he said.

“We must not believe Russia’s disinformation,” Scholz echoed. “Data clearly shows that the majority of grain exports facilitated goes to developing and emerging countries and has global impacts on grain availability and prices.”

He said next year may be even more difficult as the food shortage will be compounded by a lack of fertilizer, something Sall said was particularly worrisome for African nations.

Blinken called the numbers “staggering” and said Biden would be announcing additional U.S. contributions to fight the crisis on Wednesday. Blinken called on other countries to follow suit.

“Some countries with the capacity to do more are among those doing the least,” he said. “That needs to change. No matter what countries have done so far, every country is called upon to do more.”

Blinken also called for the renewal of the July agreement on the shipments of Ukrainian grain.

Denial of responsibility! Verve Times is an automatic aggregator of the all world’s media. In each content, the hyperlink to the primary source is specified. All trademarks belong to their rightful owners, all materials to their authors. If you are the owner of the content and do not want us to publish your materials, please contact us by email – admi[email protected]. The content will be deleted within 24 hours.
Antony BlinkenDavid BeasleyGeneral newsGovernment and politicsGustHealthHuman welfareHunger
0
Share FacebookTwitterGoogle+ReddItWhatsAppPinterestEmail