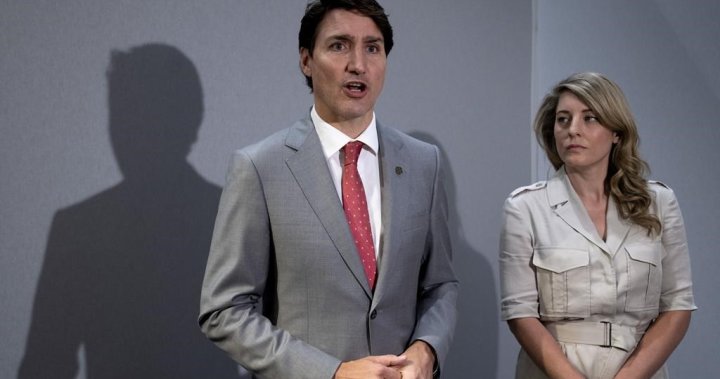 Foreign Affairs Minister Melanie Joly says Canada will be bringing the concerns of smaller Commonwealth nations to the G7 leaders in Germany Sunday, particularly the growing threat of famine.

Prime Minister Justin Trudeau and Joly arrived in Kigali, the capital of Rwanda, on Wednesday for the Commonwealth Heads of Government meeting, which has been dominated by the concerns of nations that are suffering from food scarcity.

She said Canada is in “listening mode” at the Commonwealth, where leaders of smaller nations are able to speak without the dominating presence of the United States, Russia and China.

Canadian officials have been trying to reinforce that the cause of the shortage is Russia’s illegal invasion of Ukraine.

“What is clear to us is that Russia is weaponizing food and putting a toll on many countries around the world, and putting 50 million lives at risk,” Joly told reporters Friday evening in Rwanda.

She said Russia has been targeting Ukrainian ports and grain silos and systematically preventing grain from reaching countries that need it.

Trudeau had attempted to meet with the chair of the African Union Commission, Moussa Faki Mahamat, for several days during the Commonwealth summit but the sit-down was repeatedly postponed and eventually cancelled.

Shortly after Trudeau arrived in Rwanda the government announced Canada would dedicate a new ambassador to the African Union, which has suffered from the food shortages inflicted on the continent as a result of the war between Russia and Ukraine.

Both Ukraine President Volodymyr Zelenskyy and Russian President Vladimir Putin have met with representatives of the African Union, with Russia blaming Russian sanctions for stopping up the flow of grain.

Trudeau travels to the Bavarian Alps in Germany for the G7 Summit Saturday night, where the conflict with Ukraine will be top of mind.

Joly said she spoke to her G7 counterparts Friday, and expects famine and safe passage for Ukrainian refugees to be the top concern.

Some of the other voices the prime minister has promised to centre at his international meetings belong to youth leaders who spoke at a dialogue event Saturday, focused on issues facing young people around the world.

Some of the delegates spoke about the devastating effects of climate change, particularly around remote island nations where infrastructure cannot withstand natural disasters and rebuilding efforts take years. The onslaught takes a toll on education and health services, one delegate told the forum.

Denial of responsibility! Verve Times is an automatic aggregator of the all world’s media. In each content, the hyperlink to the primary source is specified. All trademarks belong to their rightful owners, all materials to their authors. If you are the owner of the content and do not want us to publish your materials, please contact us by email – [email protected]. The content will be deleted within 24 hours.
CanadaG7G7 SummitG7 summit CanadaGermanyRwandaWhat is G7 summitWorld
0
Share FacebookTwitterGoogle+ReddItWhatsAppPinterestEmail

Google’s Pixel 5 was the last of its kind