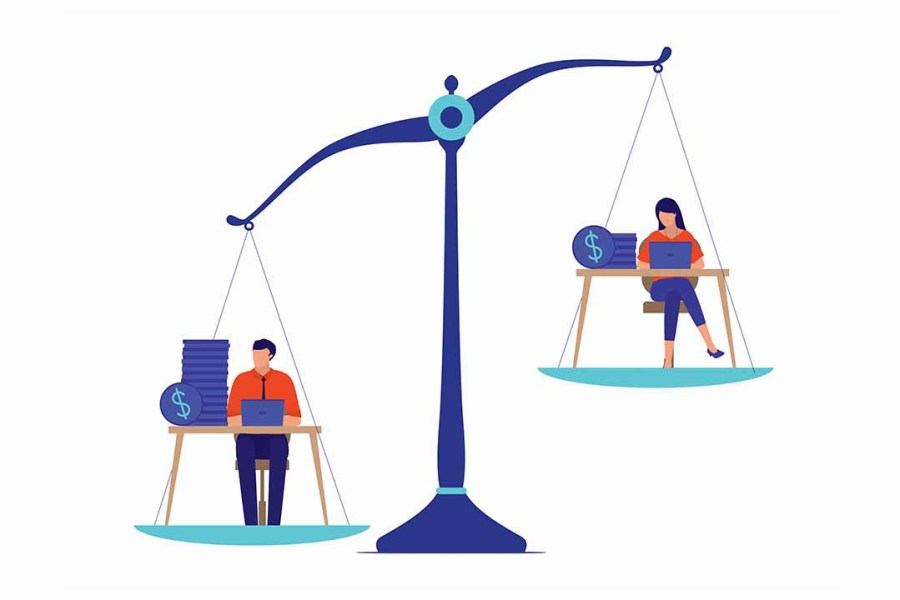 Can the U.S. close a gender pay gap widened by the pandemic?

(NewsNation) — Record-low unemployment may be good for workers asking for better wages, hours and benefits, but is it enough to close the gender pay gap?

When considering both part time and full time work, the gap is closer to 77 cents for every man’s $1 last year. The disparity is even starker for Black, Latina and indigenous women, all groups who’s pay gaps widened in 2021.

Unfortunately, experts like Dr. Betsey Stevenson, a researcher at the National Bureau of Economic Research, say even those gains could be at risk, as many women suffered setbacks as a result of burnout, workforce dropouts, work gaps and lower earnings in the pandemic economy.

“Every act of discrimination you experienced in your life tends to accumulate over time,” Stevenson said. “The cumulative hit of 1,000 little paper cuts really starts to show by the time you hit age 50.”

But one state has completely bucked the norms: Vermont, where the gap has narrowed from 16 cents in 2015 to 9 cents today and is the lowest in the country. The national pay gap has only closed 2.4 cents in that period.

So, what are they doing differently?

One effort moving the needle, officials say, is a seven-year initiative called Change the Story Vermont, which brought together thousands of employers and employees alongside advocates and lawmakers  to brainstorm ways to close the gender pay gap.

A range of solutions emerged from this effort. Lawmakers passed new legislation like pay equity measures, bans that prohibit an employer from asking for a salary history and stronger wage transparency laws.

Simultaneously, the initiative created voluntary programs, like mentorships for businesses to teach each other on how to create better workplaces. They could also join a pledge to pay workers equally called the Vermont Equal Pay Compact, which 200 businesses have signed to date.

“Trying to get everybody on the same page is sometimes challenging,” said Cary Brown, executive director of the Vermont Commission on Women, a non-partisan government agency involved in the effort. “But these are all things that can have kind of the indirect ripple effects on the amount of money that women are earning.”

4 ideas to reduce hunger in America as food prices skyrocket

The tool has only been available for about a year. But even in that short period, Brown said it has helped companies “tease out where some inequities may have happened without them even realizing it.”

Mara Riviera, is head of people and culture at Chroma, one of the first companies in Vermont to sign the Equal Pay Compact.

“I tried using the tool myself, thinking, ‘(Chroma) is not going to have a problem,’” said Riviera, who was also a part of the group developing the tool.

To her surprise, she found several women were being underpaid. “It was an important lesson (that) I can’t take it for granted. We have to constantly be working and looking at it.”

While Vermont has seen significant progress in the past few years, it’s unclear how much can be attributed to this effort. Only 200 of more than 70,000 small businesses in Vermont have signed the Equal Pay Compact, according to the state’s Commission on Women.

Enforcing pay equity from the top down

While Vermont’s approach is mostly voluntary, Iceland’s top-down approach that gives bite to an anti-discrimination law could show a nationwide strategy for making wages more equitable in the U.S.

Since 2018, businesses and government departments with more than 25 employees have been required to prove they offer equal pay for equal work.

Those that meet government standards for gender pay equity get certified, while those that don’t or allow their certification to expire could get fined almost $400 U.S. dollars a day.

Every year, they submit wage information through a standardized program that accounts for years of experience, job description, education and specialized skills.

Employers are also required to share the results of their pay equity analysis with their workers, an added incentive for them to make sure they pay them equally.

Gender pay gaps have decreased from 15 percent to 12.6 percent in Iceland since 2017, just before the legislation went into effect. The European Union average is 14 percent.

“You can use Iceland as an example to see that (equal pay) can be successful,” said Rut Einarsdottir, secretary general of the Icelandic Women’s Rights Association. “The economic situation in Iceland is good. And it’s getting better.”

This is despite the fact that across the European Union, progress on closing the pay gap has stagnated in recent years. Poland, Finland and Denmark are exploring adopting similar laws, Einarsdottir said.

In Iceland, part of the legislation’s success is that employers and employees were both on board: Representatives from unions, trade associations, gender rights advocates and government officials came together to write the legislation. Those factors alone might stop Iceland’s success from being replicated in the U.S.

Both Iceland and Vermont are relatively small, with populations of less than 1million residents.

And experts in both Iceland and America say closing the gender wage gap alone won’t solve the more pervasive issues that keep women earning less wealth over their lifetimes: a lack of workplace training or promotions, and a cultural bias that funnels girls into lower-paid careers. This accounts for as much as 24 percent of the gender pay gap.

“People will say things like, ‘Well, there’s not as big of a pay gap if you control for occupations.’ Well, why are women in some occupations?” Stevenson said.

Pixar’s Elemental is releasing in June 2023