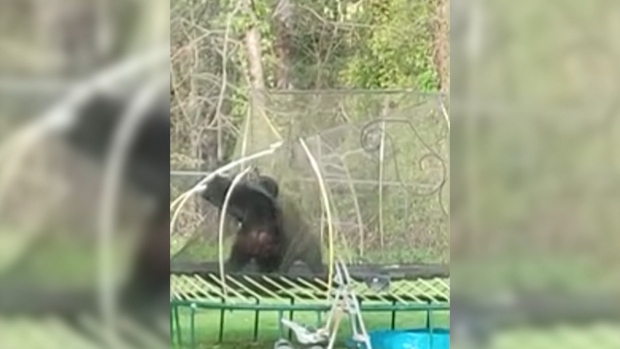 A Coquitlam resident was treated to a surprising show last week when two black bears discovered her backyard trampoline.

Rose Waldron caught the interaction on video, sharing her thoughts on the situation as she watched from a safe distance.

“So much for that trampoline,” she says at one point.

As the video begins, one of the bears is inside the high net that encircles the trampoline. The other is standing outside, on the edge of the trampoline frame.

After a few unsuccessful attempts to climb over the net, the bear on the outside finds its way in, wrestling briefly with the other bear on the bouncy surface before both animals lie down.

Waldron notes as she watches that she doesn’t want to go outside and try to scare the bears away, for fear that they might get caught inside the trampoline net and “freak out.”

As bears emerge from hibernation and become more active, they often find themselves in human-created environments. That can lead to charming videos like Waldron’s, but it can also lead to significant property damage.

Earlier last week, Trail, B.C., resident Michael Allison was surprised to find his car had been mangled by a black bear likely looking for food.

Bears that come to see humans as a source of food are seen as potential threats, and the BC Conservation Officer Service often determines it has no choice but to destroy them.

Data from the provincial government shows the months of May through October tend to see the largest number of black bears killed by conservation officers.

The average is even higher in October, when bears are consuming as many calories as they can in preparation for the winter.

More than 500 black bears were killed by conservation officers in B.C. last year, and Luci Cadman, executive director of the North Shore Black Bear Society, says that’s partly a product of people not taking messages about securing attractants to heart.

In January, Cadman told CTV News she thinks humans might change their behaviour if they realized just how many bears are killed each year.

“If people that had a garage stored their garbage and organics inside the garage until the morning of collection we would see a huge reduction in the amount of time the bears are spending in the community,” Cadman said at the time.

“We’ll always see them in the community and it’s just about giving them space and making sure we’re doing everything we can not to encourage them to stay.”

Tips for securing bear attractants are available on the provincial government’s website.

Muslim-American opinions on abortion are complex. What does…