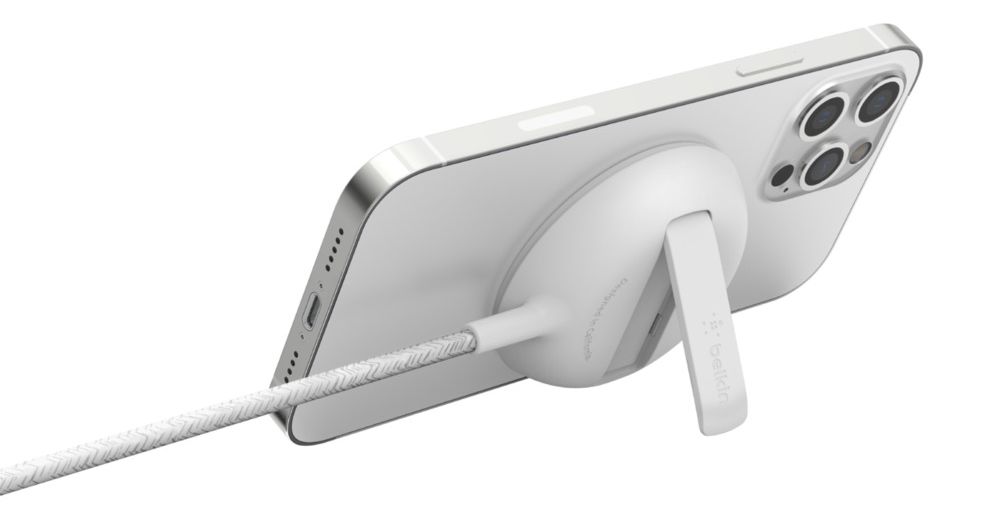 Belkin’s new Boost Charge Pro wireless charging pad takes Apple’s MagSafe puck and … well, makes it “pro” with a 2-meter-long braided cable and a kickstand for propping your phone up to make it easier to see while it’s charging (via MacRumors). It also comes in black, a must for any accessory sporting the pro moniker. There is a bit of a catch, though — like many accessories with official MagSafe certification, it doesn’t come cheap.

At $60, which it’s listed at in both the Apple and Belkin stores, the Boost Charge Pro costs significantly more than Apple’s $40 MagSafe charger, which was already seen as a bit on the pricy side. Yes, you do get that kickstand, and having a longer cable is definitely a plus. But is it really worth an extra $20, especially considering that you may need to budget for a USB-C charging brick, as it’s not included with either option?

This is a familiar story with MagSafe; despite the technology launching with the iPhone 12, MagSafe certified charging accessories aren’t particularly common. Amazon is full of MagSafe compatible wireless chargers that’ll magnetically attach to your phone (some of them even have a kickstand!), but they’re almost certainly going to max out at 7.5W of charging instead of the 15W that MagSafe affords on non-Mini iPhones. (It’s also worth noting that some Amazon vendors still advertise their charging pucks as being capable of putting out 15W, but the listings usually admit that number is only achievable on Samsung phones.)

When manufacturers do come out with MagSafe accessories, the prices are often eye-popping. Perhaps one of the most infamous instances is Belkin’s $40 Car Vent Mount Pro with MagSafe, which is not capable of charging your phone. But Belkin is far from the only company putting out pricy MagSafe accessories — Mophie just announced a $150 three-in-one travel charging mat that has a MagSafe phone charger, an Apple Watch charging puck, and a (presumably Qi) charger for AirPods. Apple’s own MagSafe Duo Charger, which doesn’t include that extra AirPod pad, will set you back $130.

Compared to those products, Mophie’s $90 three-in-one stand that’s meant to stay at home almost seems reasonable — except for the fact that you have to bring your own MagSafe puck, putting its price in line with Belkin’s similar $150 home charging mat.

This isn’t to say that MagSafe is bad or that these manufacturers should feel bad. It’s just that over a year since they were first introduced, MagSafe accessories are still quite expensive. And while Belkin’s latest puck doesn’t buck that trend, it is at least nice to have a MagSafe charger with a longer, braided cable that you won’t have to buy a separate stand for. It’s still not as cute as Belkin’s charging tree, though.

Chemical engineers show how tungsten oxide can be used as a…

Alberta Premier Jason Kenney intends to step down as UCP…