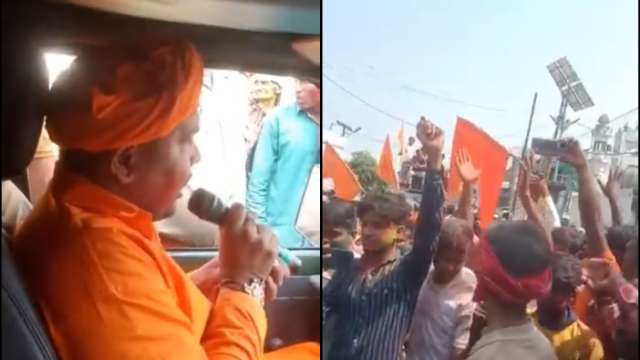 Bajrang Muni Das of Maharishi Shri Laxman Das Udasi Ashram, who allegedly made a hate speech and issued a “rape threat” in Uttar Pradesh’s Sitapur, was granted bail by a local court.

District judge Sanjai Kumar granted bail to the seer on Saturday. He was released from the district jail Sunday morning. Das was arrested on April 13 after one Ramnaresh filed a complaint against him.

After his release, the seer said he is ready to go to jail a thousand times and face many attacks but will continue to safeguard his religion and women. “I have no guilt for what I said…,” he said.

Das, the mahant of Maharshi Shri Lakshman Das Udasi Ashram in Khairabad town of Sitapur, had allegedly made the hate speech against Muslims on April 2. A video of it later surfaced on social media platforms.

In the two-minute video of the speech made outside a mosque, he could be heard using the term “jehadi” to refer to a community and threatening them if any Hindu girl is harassed by any man of that community, he would himself rape their women.

Another video of him apologising for his statement had also surfaced, hours after police lodged an FIR against him.

Denial of responsibility! Verve Times is an automatic aggregator of the all world’s media. In each content, the hyperlink to the primary source is specified. All trademarks belong to their rightful owners, all materials to their authors. If you are the owner of the content and do not want us to publish your materials, please contact us by email – [email protected]. The content will be deleted within 24 hours.
Bajrang Muni DasHate SpeechMuslim hate speech rowmuslim womenrape threatsitapurUP hate speech rowUttar Pradesh
0
Share FacebookTwitterGoogle+ReddItWhatsAppPinterestEmail

Another Layer of Corruption in the Opioid Scandal Revealed