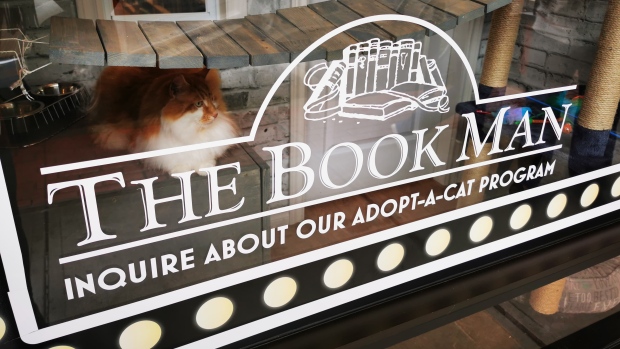 A bookstore in Chilliwack has launched a novel program that helps older cats in need of adoption find forever homes.

The Book Man’s Central Village location has had a community cat for the better part of two decades. Owner Amber Price says people have loved seeing a kitty wandering the aisles, snoozing amid the stock, or basking in the display windows.

“It’s really wonderful for people to come in and connect with animals, especially those who aren’t allowed to have cats in their apartment complexes or homes. It’s a way for them to connect with a cat and have a fun experience in an unexpected place,” she says.

Now, people who don’t want that experience to end when they leave the store have the option of applying to adopt one of the cats they meet.

Every two weeks, a new mature cat will be welcomed into the shop. Price says it can be harder for older cats to find homes, and giving the community a chance to meet friendly felines while browsing the store can help find families for them to go home to.

“I think it’s really important for older cats without a home to connect with the community. Kittens make us all fall in love with them because they’re so cute,” she explains.

“But the personalities of an older cat have already been established, so what you see is what you get. And if you have the opportunity to meet that cat chances are you’re going to fall in love.”

People interested in adopting a cat can scan a QR code, fill out an online application, or ask staff at the shop for a hard-copy. Then, the adoption agency reviews the applications and decides on a home for the cat.

The first candidate for adoption was Butters, who is thought to be six or seven and who arrived at the store on April 5.

“The ladies who ran the two cat agencies worked really hard to pick a superstar for our first cat and they really delivered. Butters is very curious and confident. On day two he was having naps in the aisles,” Price says.

“There’s something really fun about coming into a retail space and then having a cat come up and greet you and Butters is just that kind of dude.”

‘I THINK WE’RE GOING TO BREAK SOME HEARTS’

While Butters is still delighting visitors to the store, Price says there have already been a number of viable adoption applications.

“I think we’re going to break some hearts, because of course he can only go to one home. But people can rest assured that every couple of weeks there will be a new bookstore superstar for them to meet.”

The next adoptable cats are already lined up, a bonded duo of tuxedo cats that Price says she hopes can be kept together.

While customers have loved the new addition to the store, the resident bookstore cat – who was found starving, hiding in the alleyway behind the store — has been a little more circumspect.

“One of the points of nervousness for all of us was how Beatrix was going to respond to these interlopers coming into her space. So far, she’s mostly been keeping a distance and is curious more than anything,” Price says.

“We’ve had a couple of minor scuffles, but we just separate them and they have their own rooms at night so it can’t get out of hand.”

Prior to Beatrix, the store was home to Nietzsche for 12 years. Adopted in 2008 and named after a vote by staff, he passed away in 2021. But Price says he left a lasting legacy, noting sales of tote bags, bookmarks, and calendars featuring the green-eyed ginger cat and raised over $25,000 for animal charities.

“He had more friends on Facebook than I ever will and was someone who he belonged to absolutely everybody. He was just such a beloved cat,” Price recalls.

In addition to helping rescued or abandoned animals find homes, Price says she hopes other business owners will consider adopting or fostering a cat in their stores.

“It’s a great way to give a home to a needy kitty and I can tell you from personal experience over the past two decades that your clients will respond very positively to it,” she says.

While the cat adoption window is only a feature at the Chilliwack location, the Book Man in Abbotsford has also been home to a cat, a rescue named Gatsby, since opening in 2011.

Long-Range Weapons From West For Ukraine Will Not Deter…