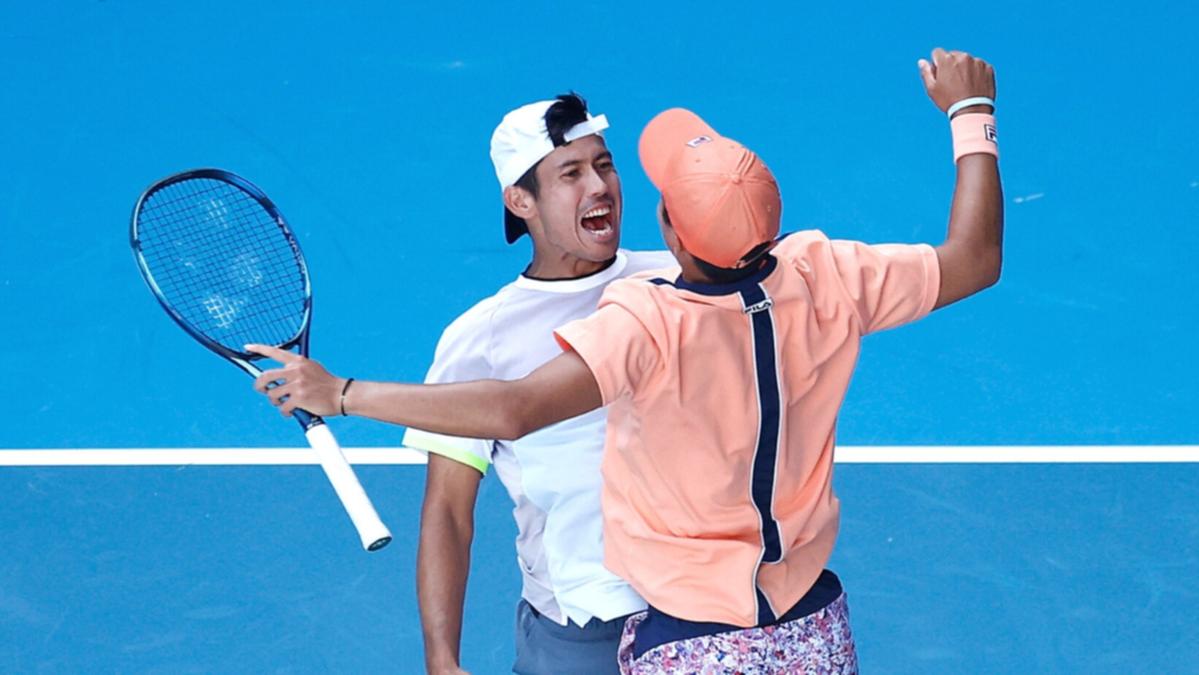 The dynamic duo recorded a straight sets 6-3, 6-1 quarter-final win at Kia Arena as their amazing run in the doubles draw continues.

WATCH THE VIDEO ABOVE: Aussie singles players ‘just wing it’ in upset win over world No.1 doubles pair.

Both men won their first-round singles matches, however their campaigns came to an end in the second round and they are now finding success playing doubles together.

Hijikata and Kubler will be hoping to follow in the footsteps of fellow Aussie pairing Nick Kyrgios and Thanasi Kokkinakis who won the men’s doubles title last year at Melbourne Park.

Speaking after the match, the pair said they are ‘winging it’ as they make their way through the doubles field.

“We are still just winging it,” Hijikata laughed.

“(Their coaches) Bunty and Sharky have more to do with the tactical stuff than either of us.”

Kyrgios and Kokkinakis were affectionately known as the ‘Special Ks’ and Kubler asked the Australian public to think of a nickname for the new doubles team.

“I don’t know if it’s our job to come up with one, you know. I think if we get one we’ll run with it, but we have no idea, no idea,” Kubler said during the post-match interview.

The crowd burst into laughter as Kubler went on to thank the Australian Open fans for their support during the match.

“The energy you guys brought was unbelievable and we really thrive off it, and that’s why we play such great dubs, so thank you.”

Hijikata said it was important for the pair to start the match off well.

“We started off a little bit better than our last two matches, so yeah, that was good for us today I suppose and yeah, Koobs brought it from the first point,” Hijikata said.

“He (Kubler) played some unbelievable balls today, but yeah, thanks to everyone for coming out, you guys really brought it too, it’s so much fun to play here, so thank you.”

Kubler and Hijikata will face eighth seeds Marcel Granollers and Horacio Zeballos in the semi-finals as they continue their unlikely charge towards a spot in Saturday’s men’s doubles final.

Denial of responsibility! Verve Times is an automatic aggregator of the all world’s media. In each content, the hyperlink to the primary source is specified. All trademarks belong to their rightful owners, all materials to their authors. If you are the owner of the content and do not want us to publish your materials, please contact us by email – [email protected]. The content will be deleted within 24 hours.
Australian OpensportTennis
0
Share FacebookTwitterGoogle+ReddItWhatsAppPinterestEmail

Seed banks may be a secret weapon against climate change : NPR

China wants a quick economic recovery, but may have to wait…