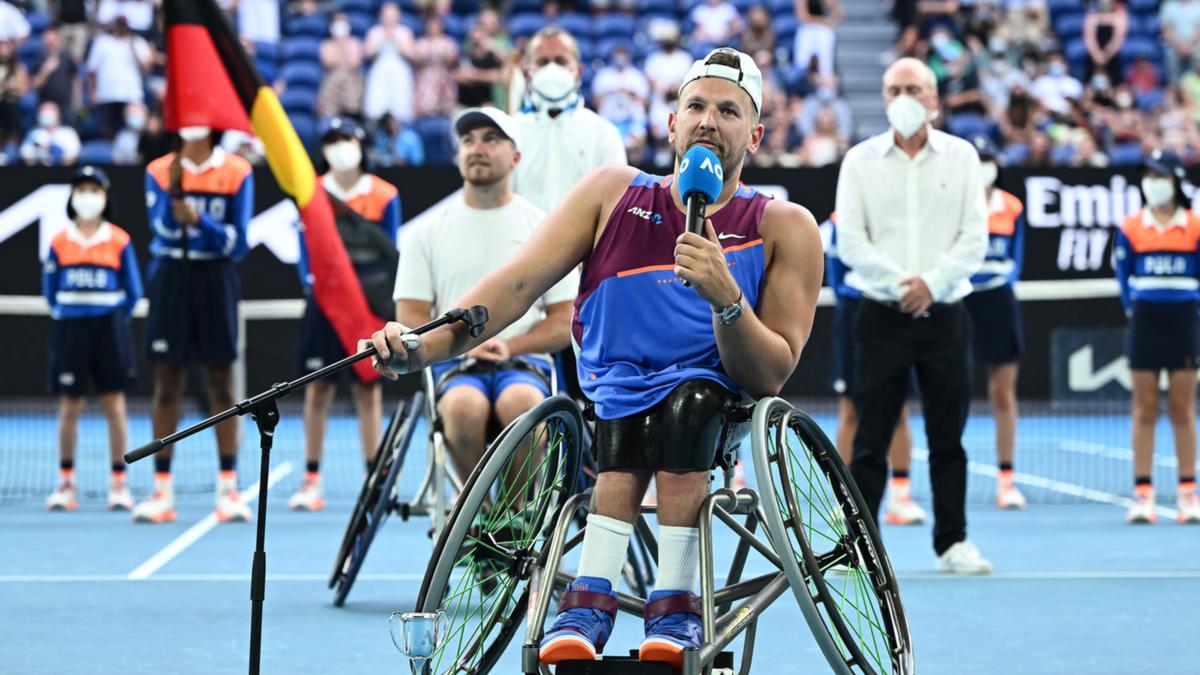 But despite a courageous effort after a whirlwind week, the 31-year-old couldn’t quite get it done in his swansong.

Alcott was beaten by Sam Schroder in the men’s quad singles final on Rod Laver Arena on Thursday, with the Dutchman winning a tight and long first set before taking advantage of a fatigued Alcott in the second.

A reflective Alcott was noble in defeat, showing the class he’s had during his entire time in public life as an athlete, broadcaster and disability advocate.

“You were definitely the better player. You’ll be winning many of these. Awesome job and congratulations.”

He also thanked his team and family, as well as Tennis Australia chief Craig Tiley and chair Jayne Hrdlicka.

“To the Australian Open. I love you so much. Thanks so much to Jayne and Craig, and everybody. Thank you so much for changing my life, and also for backing someone who’s disabled to be the front of your brand.

“You changed my life, but judging by that award I got a couple of days ago, maybe helped change some other lives as well.”

He left his “biggest” thanks for last.

“My biggest thanks of all goes to you – everybody watching today,” he said.

“I’m really the luckiest guy in the world and I didn’t need to win today to realise that.

“It’s because you, everybody watching here today, people like me with disability, we are getting not only the recognition but we are integrated and involved in our society.

“We want to me more and more every single day.

“Thank you to every single person for changing my life. I appreciate it so much.”

After jetting back from the Australian of the Year ceremony in Canberra, held just a few hours after he’d won his semi in Melbourne, the 31-year-old was back at the tournament on Wednesday, laughing with reporters: “S***, I got to play tennis tomorrow, don’t I? Forgot about that.”

“Emotionally, I’m a full ten out of ten; physically, I’m a two out of ten. I am wrecked – but I wouldn’t want it any other way. That’s how I always live my life.

Denial of responsibility! Verve Times is an automatic aggregator of the all world’s media. In each content, the hyperlink to the primary source is specified. All trademarks belong to their rightful owners, all materials to their authors. If you are the owner of the content and do not want us to publish your materials, please contact us by email – [email protected]. The content will be deleted within 24 hours.
Australian OpensportTennis
0
Share FacebookTwitterGoogle+ReddItWhatsAppPinterestEmail

Changing climate seems to have expanded, rather than stressed, dietary resources in Sea of Galilee region — ScienceDaily

11 Affordable One Shoulder Tops For Every Summer Style