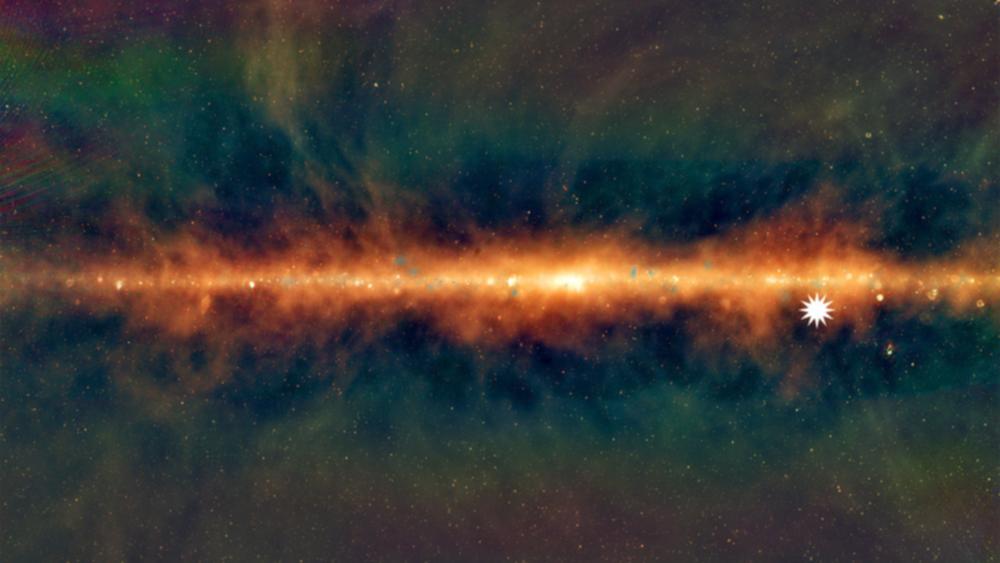 West Australian astrophysicist Natasha Hurley-Walker was scanning radio signals across huge swaths of the cosmos in late 2020 when she detected a mysterious object 4000 light-years away.

It unleashed a giant burst of energy every 20 minutes or so and then disappeared several hours later.

In a patch of sky monitored continuously over 24 hours, the scientists observed something known as a radio transient, which refers to an object that periodically releases brief flashes of radio signals, as if it’s switching on and off in space.

“It was kind of spooky for an astronomer because there’s nothing known in the sky that does that,” International Centre for Radio Astronomy Research in Australia (ICRAR) astronomer Natasha Hurley-Walker said in a statement.

The researchers, who had never seen this occurrence this before, detailed the finding in a study published Wednesday in the journal Nature.

Similar occurrences have been seen before, but usually as very quick events that flash on and off within seconds or milliseconds or as longer pulses that last days.

More research is needed to figure out what’s causing the bursts of energy, but the astronomers think it could be a so-called magnetar, which is a special type of “dead” star with an ultrastrong magnetic field.

A repeating radio signal in space may cause some to think it’s a dispatch from aliens, but Hurley-Walker said the observations spanned a wide range of frequencies, which indicates that they have a natural origin and aren’t some artificial signal.

The search began in 2020, when Hurley-Walker assembled a team to map radio waves in the universe using data collected in 2018 by the Murchison Widefield Array, a radio telescope in the West Australian Outback.

Tyrone O’Doherty, an undergraduate student at Curtin University at the time, found the object by looking for differences in Milky Way observations from March to May 2018.

Mr O’Doherty said he hadn’t expected to make such a fascinating discovery.

“It really feels quite surreal to have found something like this,” he said Monday in a news briefing.

To confirm the discovery, Dr Hurley-Walker sifted through the telescope’s extensive archives, which stretch back to 2013, to see if it had picked up any other activity from the object.

She found that it had switched on in the first part of 2018, emitting 71 flashes of radio signals from January to March of that year, before it switched off again.

As she and her colleagues saw in their own observations, the pulses came at regular intervals.

The astronomers determined that the object is likely to be a slowly spinning magnetar that is somehow converting energy from its magnetic field into light that can be detected by radio telescopes.

Pinning the details down, however, will require observing the object when it’s active again or finding similar objects elsewhere in the Milky Way, Dr Hurley-Walker said.

It’s an “exciting” discovery that demonstrates how much remains to be understood about radio transients, Massachusetts Institute of Technology assistant professor of physics Kiyoshi Masui said.

“There’s all this stuff that’s just waiting to be found,” he said.

While he wasn’t involved with this research, Prof Masui’s work focuses on what’s known as fast radio bursts, which are mysterious single pulses of radio waves from other galaxies that have long mystified astronomers.

It’s possible, Prof Masui said, that the two phenomena are related. Magnetars are thought to be a possible source of fast radio bursts, but the links haven’t always been clear.

Magnetars are a type of dead star, or neutron star, that has burned up all its fuel and collapsed into a very dense spinning object with a powerful magnetic field.

Magnetars are typically found only in areas where new stars are being born, but fast radio bursts have been detected away from stellar nurseries, sometimes in areas where there are only old stars, Prof Masui said.

In their study, Dr Hurley-Walker and her colleagues found that the newly detected object appears to be spinning much more slowly than other magnetars, which could indicate that it has outlived other magnetars that typically last only a few thousand years.

“If this object is, in fact, a magnetar, that could mean that at least some types of magnetars can survive much longer than we thought they could,” Prof Masui said.

“That could solve the thorn in the side of the magnetar hypothesis for fast radio bursts.”

Yet, Dr Hurley-Walker said it could also be an entirely new type of cosmic object that caused the flashes of energy.

Though the object appears to be inactive at the moment, she plans to continue to monitor the Milky Way with other radio telescopes and X-ray observatories in hopes of finding others like it.

Building a catalogue of similar occurrences could help researchers understand how they came to be.

“Because we didn’t expect this kind of radio emission to be possible, the fact that it exists tells us that some kind of extreme physical processes must be happening,” she said.

Denial of responsibility! Verve Times is an automatic aggregator of the all world’s media. In each content, the hyperlink to the primary source is specified. All trademarks belong to their rightful owners, all materials to their authors. If you are the owner of the content and do not want us to publish your materials, please contact us by email – [email protected]. The content will be deleted within 24 hours.
NewsScienceSpaceTechnologyTravelWestern AustraliaWorld News
0
Share FacebookTwitterGoogle+ReddItWhatsAppPinterestEmail