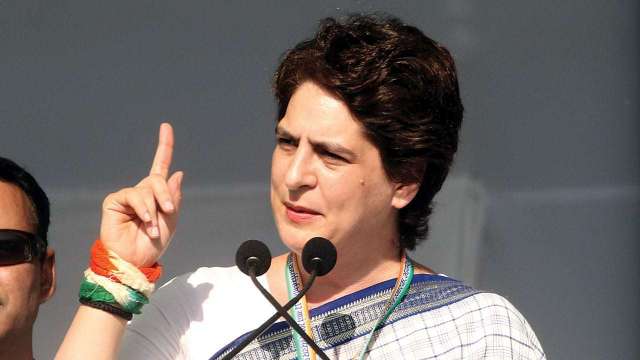 At Udaipur Chintan Shivir, call for Priyanka Gandhi to take over as Congress president

New Delhi: Priyanka Gandhi Vadra should take over as the Congress president if Rahul Gandhi is unwilling to lead, as she is the most popular face of the party, Congress leader Acharya Pramod has suggested at the party’s Udaipur Chintan Shivir. The leader from Uttar Pradesh also called for embracing the issue of Hindutva and winning back the confidence of the people of the country. Demanding that the younger generation should be allowed to lead the party from the front, he implied that Sachin Pilot should be promoted in Rajasthan, which goes to Assembly polls next year.

“It is time Rahul Gandhi should take over the party reins and if for some reasons he is not ready to accept the role, Priyanka Gandhi Vadra should come forward and lead the party, as she is the most popular face in the country,” Pramod told PTI.

He, however, said crores of people want Rahul Gandhi to return as the Congress President.

“We all again want that he should take over as party president, but for some reasons if he is not willing to take over, then crores of people across the country want the most popular leader, Priyanka Gandhi Vadra, to take over in his place,” he added.

Rahul Gandhi had resigned as the Congress president after the 2019 general elections taking moral responsibility for the party’s electoral debacle. Later, the Congress Working Committee had elected Sonia Gandhi as the interim president. The party doesn’t have a regular president as of now.

Several dissident Congress leaders have demanded from the party appointment of a full-time Congress president and bolstering its internal democracy.

On possible changes in the conflict-hit Rajathan unit, where Ashok Gehlot and Sachin Pilot have been vying to lead the party into the assembly elections next, he said: “There is need for change and in Rajasthan too there will be a change, I am confident.”

He said Pilot is a popular young leader but that doesn’t mean Gehlot isn’t popular.

With inputs from PTI

Denial of responsibility! Verve Times is an automatic aggregator of the all world’s media. In each content, the hyperlink to the primary source is specified. All trademarks belong to their rightful owners, all materials to their authors. If you are the owner of the content and do not want us to publish your materials, please contact us by email – [email protected]. The content will be deleted within 24 hours.
Acharya PramodAshok GehlotChintan Shivir 2022congressPriyanka Gandhi VadraRahul GandhiSachin Pilot
0
Share FacebookTwitterGoogle+ReddItWhatsAppPinterestEmail