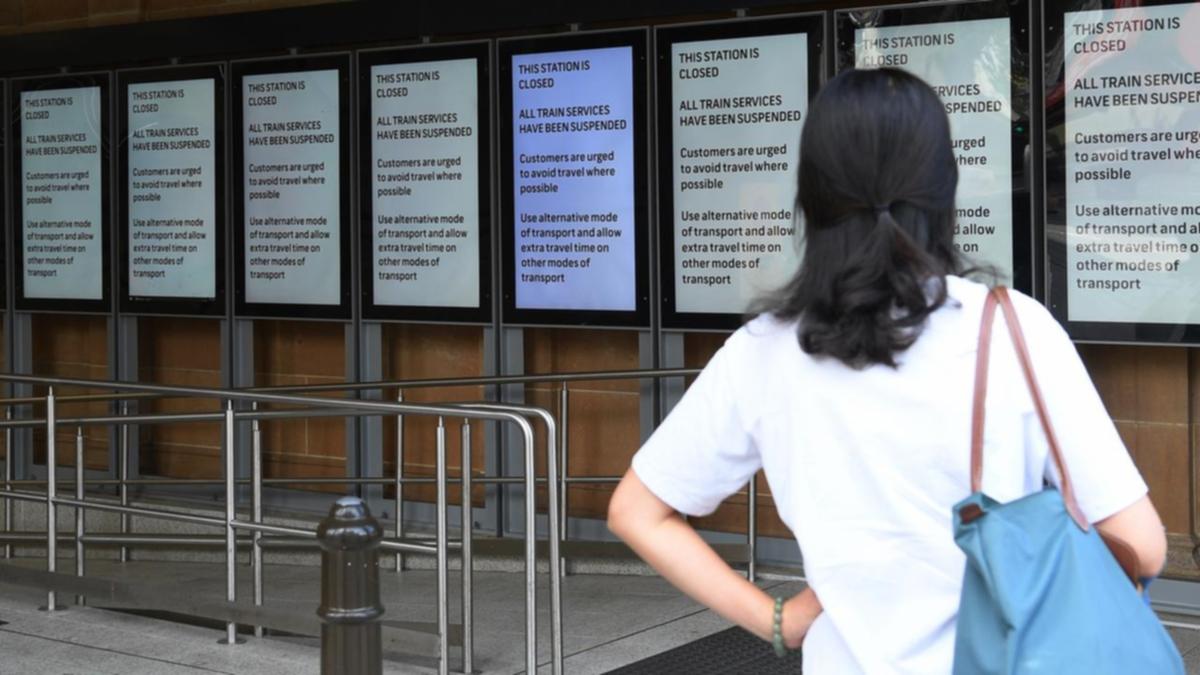 Sydney commuters can expect delays to the city’s train network for at least another day, the transport minister says, after a meeting between the government and rail unions ended without a resolution.

The Rail, Tram and Bus Union met with Transport Minister David Elliott on Tuesday to try and hammer out an agreement to the workplace fight that has caused limited train services to run on Tuesday after a system-wide shutdown on Monday.

Watch the video above for more on the train network shutdown

The meeting between union officials and the minister lasted about an hour and concluded around 10am – but nothing of substance was agreed.

The meeting reportedly included full and frank exchanges between the parties.

RTBU NSW Secretary Alex Claassens said there was an initial “bloodletting” at the meeting, followed by a discussion about the way forward out of the crisis.

Sydney Trains and NSW Trainlink were due to appear before the Fair Work Commission on Wednesday, along with the union, to resolve issues surrounding negotiations for a new enterprise agreement.

Transport Minister David Elliott confirmed on Tuesday the application has since been withdrawn and the hearing has been vacated.

“Going forward, it is on the advice of senior counsel that the government will withdraw the matter before the Fair Work Commission,” he told reporters on Tuesday afternoon.

“Senior counsel have given that recommendation, which the government accepts in the interests of transparency and good will.

“As a result of that, I have agreed with the union today that we will start to commence rewriting the enterprise agreement which expired in May last year.”

Will trains return to normal tomorrow?

Mr Elliott said he was happy with how services ran on Tuesday and said commuters should expect some delays on Wednesday.

“We did have 160 buses replacing services on the train line and that did go according to plan,” he said.

“At this stage, commuters should expect that same service in (Tuesday) afternoon’s commute home and potentially (on Wednesday).”

Trains are running at 25 per cent capacity on Tuesday, with most trains timed every 30 minutes, while services on Sydney’s inner-city rail network are reduced to every 15 minutes, and buses are supplementing some services.

Sydney Trains says commuters can expect a limited service for days, before frequency increases later in the week, and train passengers are being urged to find alternative transport.

The snap cancellations, ordered by transport authorities, left commuters stranded across the city and surrounds during the morning peak on Monday.

Premier Dominic Perrottet on Monday blamed the union for the shutdown, saying it was part of a “coordinated, concerted attack” on the government by the union and Labor.

Mr Perrottet was angry that trains were out of action on a day when borders were opening to international arrivals, children were trying to get to school and university students were returning to campus.

But Mr Claassens insisted rail workers were not on strike, telling Sunrise he was “incredibly disappointed, frustrated and angry, like everybody else in Sydney” over the shut down.

“All of our members were at work, they were ready to operate, but there were no trains for them to operate,” he said on Tuesday.

Mr Claassens said all rail staff wanted to work on Monday but were prevented from doing so by Transport for NSW.

“We all went to bed on Sunday night and you can imagine my shock when I woke up on Monday morning realising that somebody had made the decision to pull all the trains from the network.”

While admitting that some recent union action has been “untidy,” Mr Claassens said drivers always try to “keep commuters in mind” and would never pull the pin at such late notice.

“We’ve been taking industrial action all through COVID and we’ve always done it in a way where people can still get to work and get home,” he said.

Transport Minister David Elliott later distanced himself from the decision to shut down the rail network during a different interview on Sunrise.

He told Natalie Barr the “operators of Sydney Trains” made the “operational decision” to cancel services after a “dispute over the interpretation” of an agreement made with the union on Saturday.

“So therefore, they decided there would be no services yesterday.

“Am I happy with that? Absolutely not. But it was an operational decision by the operators, so suggestions today that somehow I signed off on it at 1am yesterday morning are false.”

Denial of responsibility! Verve Times is an automatic aggregator of the all world’s media. In each content, the hyperlink to the primary source is specified. All trademarks belong to their rightful owners, all materials to their authors. If you are the owner of the content and do not want us to publish your materials, please contact us by email – [email protected]. The content will be deleted within 24 hours.
Dominic PerrottetEntertainment - SunriseNewsOn The ShowPoliticsSydneySydney TrainsTravel
0
Share FacebookTwitterGoogle+ReddItWhatsAppPinterestEmail