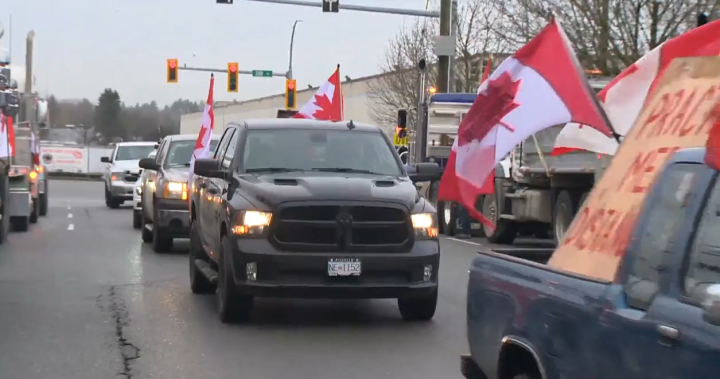 Cities in British Columbia are bracing for another day of vehicle convoys and rallies in solidarity with protesters occupying downtown Ottawa in opposition to COVID-19 mandates.

Convoys were planned in Metro Vancouver, on Vancouver Island and in Kelowna.

Lower Mainland demonstrators gathered in Langley, with plans to run a convoy through Vancouver and rally downtown at noon. The Vancouver Island convoy left Campbell River early Saturday, with plans to arrive at the Victoria legislature before noon.

“We will not be honking our horns through the hospital zone. This is something that’s important to people and we need to wake up.”

Caron estimated more than 1,000 people had gathered in Langley to participate.

2:12
Police gear up for weekend protests

Police gear up for weekend protests

Noel Newsham said he was participating because he felt his rights and freedoms were in jeopardy.

“(We’re going to) just celebrate the day, celebrate being Canadian. Hopefully our rights will be restored, and that’s it. Just have a bit of fun and, hopefully, the hammer doesn’t come down on us.”

Organizers said on social media platform Reddit their goal was to “show the convoy that there are lots of people in the city who will loudly oppose them and their message,” and prevent the convoy from passing by Vancouver General and St. Paul’s hospitals.

On Friday, health officials sent a memo to staff at Vancouver hospitals advising them not to go outside during the protests, not to wear their scrubs or IDs outdoors and not to engage with any protesters.

Police in Vancouver and Victoria have said they will be monitoring the demonstrations, and Victoria police have taken the additional step of deploying cameras in the downtown core.

Vancouver Mayor Kennedy Stewart issued a statement on Friday, citing the city’s 95 per cent vaccination rate, and telling the protesters to “make your point and go home.”

As of Friday, there were 946 British Columbians in hospital with COVID-19, while 252 people have died of COVID-19 complications since the start of the year.

Officials say 81.5 per cent of the province’s population had been double vaccinated, and data continues to show the unvaccinated at substantially higher risk of serious illness and death.

The events in B.C. come as the protest in Ottawa enters its second week.

That demonstration, which initially began as a convoy spearheaded by cross-border truckers upset at the elimination of their vaccine exemption, has since morphed into an encampment near Parliament Hill espousing a variety of goals, ranging from the end of all COVID-19 mandates to the removal of the government.

Demonstrators in Ottawa have been accused of desecrating monuments and harassing downtown residents wearing masks. Some of the convoy’s organizers also have a documented history of white nationalism and racism.

On Friday, GoFundMe deactivated a $10 million fundraising campaign for the Ottawa protesters, saying what had begun as a sincere peaceful protest had evolved to violate its terms of service, “with police reports of violence and other unlawful activity.”

Similar convoys and demonstrations were also scheduled in cities across Canada.

Denial of responsibility! Verve Times is an automatic aggregator of the all world’s media. In each content, the hyperlink to the primary source is specified. All trademarks belong to their rightful owners, all materials to their authors. If you are the owner of the content and do not want us to publish your materials, please contact us by email – [email protected]. The content will be deleted within 24 hours.
BC convoybc coronavirusbc covidbc covid updatebonnie henry updateConvoyCOVIDcovid 19 bc
0
Share FacebookTwitterGoogle+ReddItWhatsAppPinterestEmail

Canada at the Beijing Olympics: What to watch Saturday night, Sunday morning – National