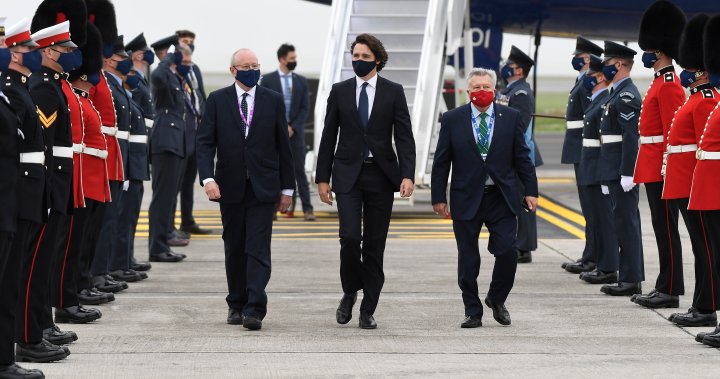 ANALYSIS: Justin Trudeau travelled to the G7. Should he have? And should he quarantine once home? – National

Former Conservative foreign affairs minister John Baird believes the prime minister shouldn’t have to quarantine when he gets home from the G7 meeting in Europe — as sitting Conservatives slam Justin Trudeau’s return plan.

“Let’s not be partisan,” Baird told Global News. “He should qualify as an essential worker. Listen, if an airline pilot or flight attendant qualifies as an essential service, certainly our prime minister and his team who are there to represent Canadians should.”

Conservative health critic Michelle Rempel Garner has been critical of the prime minister’s plan to complete the mandatory hotel quarantine in Ottawa.

Liberal government policy dictates that all returning air travellers must quarantine in a designated hotel until a negative PCR test comes back.

But, Liberal rules also dictate that international flights can only arrive in Calgary, Toronto, Montreal or Vancouver, with a series of designated quarantine hotels — termed “GAAs” or Government-Approved Accommodations — in each of the four cities.

After Global News first reported the prime minister’s plan to stay in Ottawa, Rempel Garner called a press conference on June 4 and said the move was “a slap in the face for every Canadian who has struggled with this program.” In a Facebook Live that same day, she called it “ridiculous” and “incredibly infuriating news.”

2:16
Trudeau arrives in Cornwall, U.K. ahead of G7 summit

Trudeau arrives in Cornwall, U.K. ahead of G7 summit

“Like all Canadians returning home via air during the pandemic, my delegation, the delegation and I, will be staying in a government-approved airport hotel,” Trudeau replied.

Yet not a single Ottawa venue appears on the government’s list of approved hotels.

Paris, and many others steeped in summitry, tout the importance of attending in person. Not doing so would be “harmful to Canadian diplomacy and Canadian interests.”

“It’s really important at this G7 meeting to be building these personal relationships. You have to do that in person. It would be downright weird if he was the only leader not to go in person,” Paris said.

Unlike larger summits, such as the G20 (or NATO, which the prime minister plans to attend on Monday after the G7 summit in the U.K.), the G7 offers more opportunities to connect, both formally and informally, with business happening on the sidelines.

In addition to the main G7 meetings, there are official bilateral sit-downs with other leaders, less formal “pull-asides,” meals, social events, and, according to Sen. Peter Boehm: “the infamous brush-by.”

Boehm is a former personal representative to the prime minister at G7 summits (the official term is “sherpa”).

“You can have a minute or two just in a corridor, or in a stairwell — as I have had in the past — and work out a solution to a problem or get some support for a position that you’re putting forward,” Boehm told Global News.

“You can broker deals sometimes in the middle of the night. If there’s a lack of agreement on a subject, you can go off into a corner with your interlocutor, whether it’s just the two of you or all of three of you saying, ‘OK, how can we hash this out?’”

It’s not the same in Zoom-land. Boehm says leaders are generally not as “candid or as engaged” during virtual meetings due to concerns about security.

When Baird was foreign affairs minister, he says he always took advantage of opportunities to connect with leaders at different points in the summit program.

“I’d have a list of things with each country. And I would try to buttonhole my colleagues to either build an alliance or advance some Canadian interest,” he told Global News.

Far from the U.K. seaside, and outside the corridors of power and debate on Parliament Hill, some Canadians are still frustrated the same prime minister who repeatedly told them “now is not the time to travel,” hopped on a plane.

“He won’t let any of us go anywhere,” said Ken Huband, an Ottawa resident who spoke to Global News.

Huband wintered in Florida for the past 10 years, but missed the latest season due to the pandemic, trading his snowbird status for winter at home with the snowblower.

“The rich and powerful do what they want. So it doesn’t make those who aren’t all that happy.”

While Dave Hester, another Ottawa resident, is anxious to go to the United States and take a trip to Europe. Even though he’s now fully vaccinated, he’s waiting until things ease — and thinks the prime minister should, too.

“He tells us to follow the rules and all that, and here he goes and he does the opposite,” Hester said.

But we’ll give the last word to Jonathan Mason.

The Ottawa man is desperate to visit his brother in Wisconsin. The American sibling lost both legs and multiple fingers to frostbite in February, and is trying to adjust to a new life in a wheelchair.

Mason feels helpless. COVID-19 keeps him from crossing the U.S. border. Yet, he doesn’t begrudge the prime minister his trip.

“My responsibility is not to take care of the country. His is and we need our representative,” Mason said.

“I think it’s very important that he starts to show the world that we’re not going to let this virus control us.”

Abigail Bimman, Ottawa-based correspondent for Global National, is on assignment covering Prime Minister Justin Trudeau during his trip to Europe, and will be part of the delegation quarantining in Ottawa upon return.

Denial of responsibility! Verve Times is an automatic aggregator of the all world’s media. In each content, the hyperlink to the primary source is specified. All trademarks belong to their rightful owners, all materials to their authors. If you are the owner of the content and do not want us to publish your materials, please contact us by email – admin@vervetimes.com. The content will be deleted within 24 hours.
Canada covid travel rulesCommentaryCOVIDcovid-19G7G7 CornwallG7 SummitG7 UK
0
Share FacebookTwitterGoogle+ReddItWhatsAppPinterestEmail

ravi kishan: Battle for UP: Bhojpuri singers at war

NSW warned to expect spike in Covid deaths as…