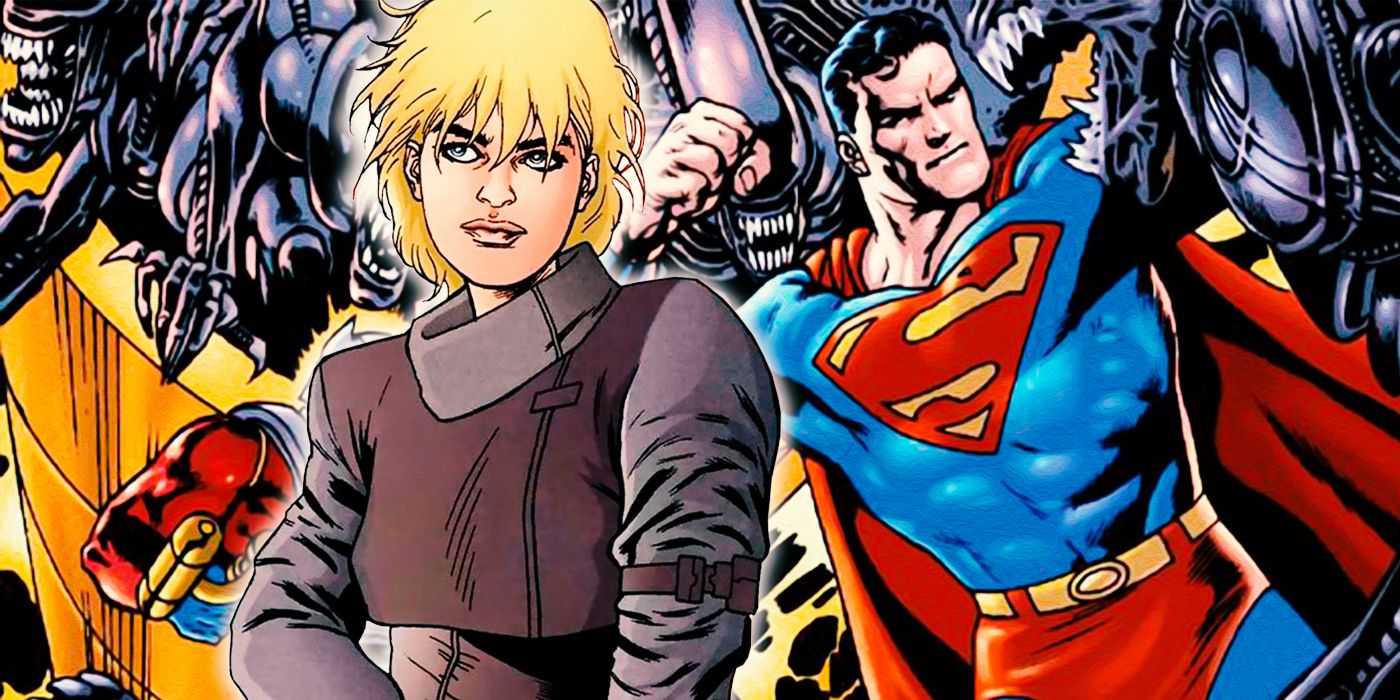 Today, we look at how a Superman/Aliens crossover nearly introduced a new Supergirl.

In every installment of “If I Pass This Way Again,” we look at comic book plot points that were rarely (sometimes NEVER!) mentioned again after they were first introduced.

One of the interesting things about the Post-Crisis Superman is that really only the people who were on the books right when the John Byrne revamp occurred (Byrne, Jerry Ordway and Editor Mike Carlin) were PARTICULARLY devoted to the changes that were made in the Superman mythos during Man of Steel, so as Byrne and then Ordway, too, left the books, the writers who came in were definitely more devoted to the general idea of the new Superman approach (especially since most of them worked closely with Ordway, who remained on the series from the reboot through 1993) but had conflicts with some of the specifics and so slowly but surely, little bits and pieces of the past were slowly added back to the Superman books. One of the more notable examples was when the alien Matrix adopted her identity of “Supergirl” full-time, thus bringing Supergirl back to the books for the first time since the Post-Crisis reboot had eliminated her from continuity (one of the big parts of the reboot was making Superman the SOLE survivor of Krypton again). So long as Carlin was still in charge, though, things weren’t going to strain TOO far. Not to say that people wouldn’t still try, of course, like Dan Jurgens’ attempt to introduce a new Supergirl in the pages of Superman vs. Aliens.

RELATED: Eternals’ Sersi Almost Had a Romantic Fling With Another MCU Avenger

HOW DID SUPERMAN MEET THE POSSIBLE NEW SUPERGIRL?

Superman/Aliens was a prestige format three-part series written by Dan Jurgens, with layouts from Jurgens, as well. Kevin Nowland then finished the artwork (Gregory Wright worked as a colorist on it). The interesting thing to me about the comic was despite Jurgens being involved as a layout artist, the interior art looked really all like Nowlan…

the concept of the series is that a satellite, of sorts, was crash-landing on Earth and Lexcorp’s head of space discovery desperately wanted to see where this satellite was coming from and so did the Man of Steel once he began to feel that this was all Kryptonian technology and that a Kryptonian city might have escaped Krypton’s destruction…

So Superman took an experimental Lexcorp spacecraft (while Lois stayed on the Lexcorp space station with the Lexcorp scientist who was giving off serious evil vibes) and headed off to find the city and see what’s what.

Once he gets there, of course he finds that most of the city has been slaughtered. Superman sends a few survivors he’s found back to Earth (well, the Lexcorp satellite, at least) and then Superman encounters the Xenomorphs and Nowlan gets to draw some cool scenes…

Superman’s powers are fading far from a sun, but luckily, he is saved by a young woman with a flamethrower who speaks Kryptonian!

They escape, although Superman’s eyes are temporarily blinded by Xenomorph acid. He then learns that she is one of the few remaining survivors, but the ones that he sent back to Earth had aliens implanted in them! He also learns this young woman’s name. It’s KARA!

In the second issue, Kara explains that things were looking bleak for her people when they encountered a seemingly abandoned spacecraft that they planned on stripping for technology, but inadvertently letting the Alien Queen and her eggs loose on the planet…

Meanwhile, the Xenomorphs are loose on the Lexcorp satellite, which is bad news for Lois Lane (and everyone else on the satellite, of course)…

One of the recurring themes of the story is how Superman can’t bring himself to use lethal force on the aliens, but Kara is more than willing to kill to help bring down the bad guys, even if Superman won’t…

Along the way, though, Kara learns that she is legitimately the only survivor left in her city. Like Superman, she is now a complete orphan. It is a lot for her…

RELATED: An X-Men Villain Forced the Eternals Into a Team That’s Too Strange for the MCU

WHEN DID SUPERMAN LAST SEE THE POSSIBLE NEW SUPERGIRL?

This is Superman’s last hope when he discovers that he has been infected. He needs to teleport back to the Earth so that its sun can restore his powers and prevent the alien from, you know, exploding out of his chest. Kara has also been infected and Superman plans to do the same with her, but she shocks him by revealing that she ISN’T Kryptonian!

They were just met by a character known as the Cleric, who spread the Kryptonian ways to other planets. So they named themselves after the Kryptonian city, Argo City, and adopted the language…

Superman lets Kara know that it doesn’t matter, that he still sees her as his relative…

And things have gotten so intense that they both admit that they’ve grown to love each other during their time together (like siblings, of course)….

In the end, Superman is able to teleport home in time (after blowing up Argo City and the aliens in the city) and the alien’s attempts to burst from his skin fail…

He then reveals that he used the teleporter to also remove the alien from inside Kara, but since she was left behind right before Argo City blew up, he assumed she wouldn’t have been able to get to an escape pod in time, but she DID!

Clearly, then, Jurgens wanted to make Kara a regular character, but Carlin noted that they HAD a Supergirl already (Matrix) and so Kara never returned. Jurgens even explained to my pal Todd Matthy that that WAS his intent, explaining, “Mike Carlin, editor of the Superman books, as well as S/A, and I discussed various ways of bringing her into DC continuity. I always wanted to find a way to make her Supergirl, but we already had a Supergirl that Mike didn’t want to give up on. So, sadly, she remains where we last saw her.”

I guess they could still bring her back, but it’d be kind of odd.

Anyhow, thank to Todd and Dan for the information!

If anyone else has a suggestion for a future If I Pass This Way Again, drop me a line at brianc@cbr.com

CBR Senior Writer Brian Cronin has been writing professionally about comic books for over a dozen years now at CBR (primarily with his “Comics Should Be Good” series of columns, including Comic Book Legends Revealed).

He has written two books about comics for Penguin-Random House – Was Superman a Spy? And Other Comic Book Legends Revealed and Why Does Batman Carry Shark Repellent? And Other Amazing Comic Book Trivia! and one book, 100 Things X-Men Fans Should Know & Do Before They Die, from Triumph Books. His writing has been featured at ESPN.com, the Los Angeles Times, About.com, the Huffington Post and Gizmodo.

He features legends about entertainment and sports at his website, Legends Revealed and other pop culture features at Pop Culture References.

Follow him on Twitter at @Brian_Cronin and feel free to e-mail him suggestions for stories about comic books that you’d like to see featured at brianc@cbr.com!

Where is ‘College GameDay’ this week? Location, schedule, guest picker for Week 13 on ESPN

From flexible working to voice notes: 11 things in our lives…

Keith Yandle: the NHL ironman closing in on 1,000…

Are Star Wars’ Rancors More Than Just a Scary Face?